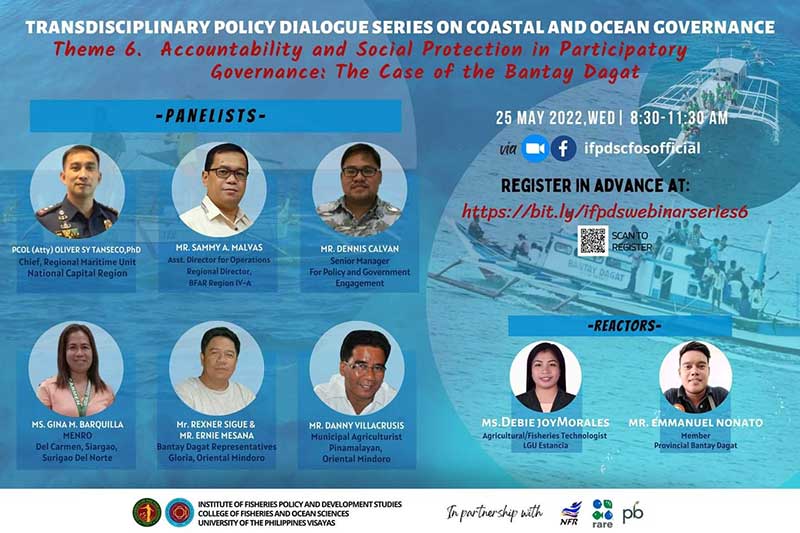 Stakeholders in the fisheries sector pushed for the institutionalization of the Bantay Dagat to effectively protect the municipal waters of coastal municipalities from further abuse and destruction.

In a webinar on transdisciplinary policy dialogue series on coastal and ocean governance held on May 25, 2022, officials of the Philippine National Police-Maritime Group, Bureau of Fisheries and Aquatic Resources (BFAR), Rare Inc. (Phils), and coastal municipalities recommended that the Bantay Dagat volunteers (also known as Deputy Sea Wardens or Sea Rangers) should not only be incentivized but also be institutionalized to give teeth to the enforcement of fishery laws.

Lawyer and Police Col. Oliver Sy Tanseco, chief of the Regional Maritime Unit of the National Capital Region; Mr. Sammy A. Malvas, assistant director for operations of BFAR Region IV-A; and Mr. Dennis Calvan, Senior Manager for Policy and Government Engagement, Rare Inc. (Phils) recognized the importance of the Bantay Dagat, a community-based seaborne law enforcement team of a local government unit, as the multiplier forces to prevent further exploitation and devastation of the marine habitat and resources.

Tanseco, Malvas, and Calvan were among the panelists during the last of the six transdisciplinary dialogue series on policy and practice governance issues of coasts and resource management organized by the Institute of Fisheries Policy and Development Studies (IFPDS), College of Fisheries and Ocean Sciences, UP Visayas.  The topic of the discussion was on Accountability and Social Protection in Participatory Governance: The Case of the Bantay Dagat.

The dialogue was aimed to examine the policy foundations for social protection, voluntarism, and participatory governance, and identify areas where policy support is lacking.

They said that this could encourage more active participation from the communities to securely manage the municipal waters as well as for effective enforcement of the fishery laws and ordinances. Bantay Dagat volunteers are mostly fisherfolk who need to earn for a living while helping the authorities in safeguarding the municipal waters despite the hazards they face.

The panelists also underscored the importance of Senate Bill 1919 otherwise known as An Act Granting Benefits and Incentives to Accredited Bantay Dagat and for Other Purposes authored by Senator Risa Hontiveros. They hope for the passage of the bill into law.

Tanseco pointed out that the challenges facing the volunteers such as the lack of required training and competencies in proper and effective maritime law enforcement will be addressed should the Bantay Dagat be institutionalized.

“The senate bill is an important step to go forward,” said Tanseco.

Malvas said the bill is one way to recognize and appreciate the contribution of Bantay Dagat in the successful enforcement of marine laws as well as to protect the deputized sea warden from politics.

Calvan presented the salient points of the bill granting Bantay Dagat volunteers benefits and incentives such as insurance and Philhealth coverage, hazard allowance, honorarium, social protection and benefits, special training, and scholarships for their dependents, among others.

Barquilla and Villacrusis shared the experiences and operations of their Bantay Dagat including the problems faced by the volunteers.

Villacrusis said “House Bill 1919 will be of big help to our Bantay Dagat because there is a big possibility that they will be displaced or replaced with other people when a new administration takes over.”

The need to train Bantay Dagat on how to apprehend illegal fishers and file cases against the violators were pointed out during the dialogue.

As volunteers, Bantay Dagat received minimal honorarium from the local government units. Some don’t have insurance coverage and other benefits.

The dialogue was also graced by Bantay Dagat representatives, who shared their experiences and challenges as partner in Marine Law protection, namely, Mr. Rexner Sigue and Mr. Ernie Mesana from Gloria, Oriental Mindoro and Mr. Emmanuel Nonato from Miagao, Iloilo. Ms. Debie Joy Morales, agricultural/fisheries technologist from the municipality of Estancia, Iloilo was one of the reactors.

The Transdisciplinary Policy Dialogues Series in Coastal and Ocean Governance, which was made possible in partnership with Parabukas, Panagat, NGOs for Fisheries Reform (NFR), RARE Philippines, Climate Change Commission, and Technical Working Group on Climate Change and Fisheries, was aimed to engage various stakeholders  to incorporate science-based input into national and local legislative processes and gain a greater grasp of the legal and policy contexts in which many challenges of coastal and ocean governance are rooted, particularly in the Philippine context.

The initiative also sought to develop enhanced pathways for collaboration that will be utilized by those involved in the transdisciplinary engagement.

Themes of previous discussions were the following: 1.) Issues and Policies on the proposed Coastal Greenbelt; 2.) Governance Concerns Around Integrated Coastal Management; 3.) Development Governance and Fisherfolk Resettlement; 4.) Managing Sustainable Development Goals, Blue Justice, and Commercial Fishing in Municipal Waters; and 5.) Leaving no one behind in Marine Protected Areas. (Ms. Lenilyn B. Gallos; With reports from IFPDS)