BACOLOD City – Has vaccine mandates or policies restricting the movement of unvaccinated persons led to underground activities like production and sale of fake vaccination papers?

Police Major Ramel Sarona, head of Police Station 1, said a criminal complaint for falsification of public documents and violation of Republic Act 11332 (Mandatory Reporting of Notifiable Diseases and Health Events of Public Health Concern Act) are being readied against the suspects. 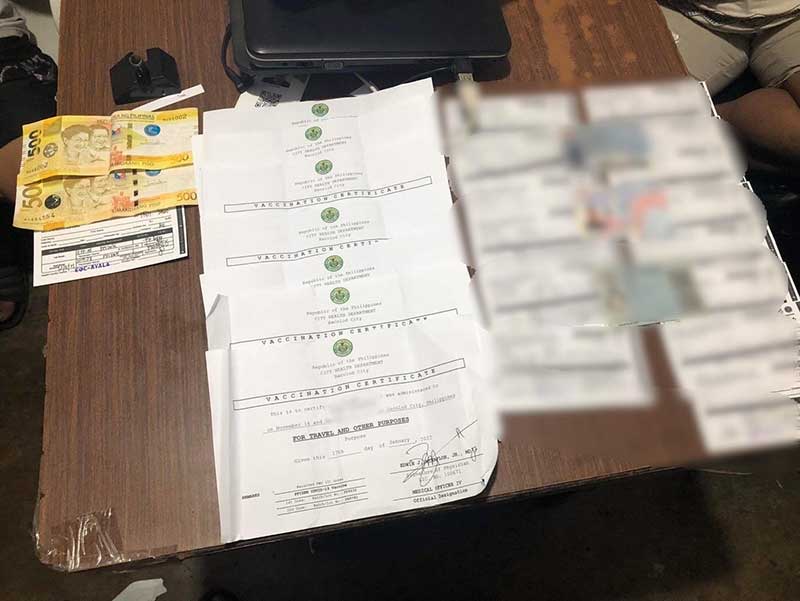 Sarona said they received information about the sale of fake vaccination cards and upon verification, they launched a buy-bust operation against the suspects, who were caught selling the cards for P500 apiece.

Based on their investigation, Sarona said that Maribeth and Ivan were allegedly looking for clients while Funelas was the one reportedly printing the fake vaccination cards.

Police recovered from them a laptop and a printer, as well as several fake vaccination certificates and cards.

Sarona said the suspects were allegedly engaging in the business for more than two weeks now.

He said the suspects refused to comment on the allegations against them.

Meanwhile, the Department of the Interior and Local Government (DILG) today warned the public against so-called “COVID-19 vaccination exemption cards” that can allegedly be used by unvaccinated individuals to be exempted from stay-at-home orders, ride public transportation, and enjoy other privileges.

“The public is warned that there is no such thing as a “vaccination exemption card. This is not authorized, issued, nor recognized by the government. In other words, these are fake,” a PIA report quoted DILG Undersecretary and Spokesperson Jonathan Malaya as saying.

He said that according to reports received by the Department, the “exemption cards” which supposedly originated in Facebook groups and group chats in Regions 11 and 12 can allegedly be registered to local government units (LGUs) and are supposedly recognized by local authorities in lieu of COVID-19 vaccination cards.

Malaya said the government will never issue nor recognize such cards because this runs counter to the government’s national vaccination program to inoculate the majority of the populace to achieve population protection.

According to reports received by the DILG, people are being asked to put their name, birthdate, address, and signatures to the green vaccination exemption card being shared in FB groups and group chats, have the cards printed, laminated, and registered to their barangay/city/municipal LGUs.

He also called on local authorities to be more vigilant in their inspection of vaccination cards at provincial and regional borders to ensure that only those who had been vaccinated will be allowed to travel across borders or be allowed to use public transportation.

Per Department of Health (DOH) and National Task Force Against COVID-19 Joint Administrative Order No. 2021-0001, a standardized COVID-19 vaccine card shall be issued to vaccine recipients to ensure completion of the required doses by documenting details of their vaccination subject to the provisions of RA 10173 or the “Data Privacy Act of 2012.” (With reports from DILG and PIA)