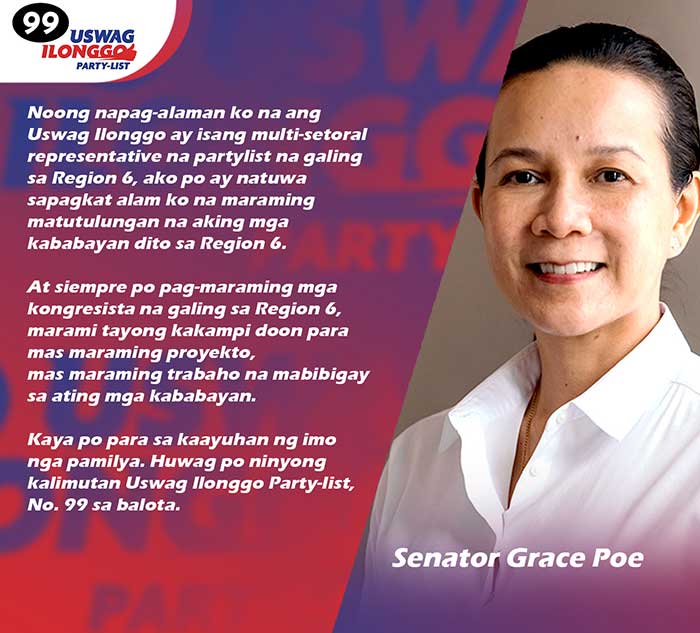 Western Visayas’ first ever regional partylist, Uswag Ilonggo, No. 99 on the ballot, got the support of another prominent national leader, Senator Grace Poe.

Poe, who has Ilonggo roots, was delighted to know that Region 6, finally, has a regional partylist that represents multi-sectoral groups. She said she is happy to endorse Uswag Ilonggo Partylist.

[This is Grace Poe, a proud ka-Ilongga and your ‘kasimanwa.’ When I learned that Uswag Ilonggo is a multi-sectoral representative partylist from Region 6, I was happy because I know that many Ilonggos from Region 6 will benefit.]

Poe believes that Uswag Ilonggo Partylist, along with district representatives, can bring more positive changes in Region 6. The partylist can propel Western Visayas to become one of the Philippines’ premier regions.

[And of course when there are many congressional representatives from Region 6, we have more allies in the region that will result into more projects and jobs for the Ilonggos.]

Poe further said that with Uswag Ilonggo Partylist’s mission and vision as well as its 5-point agenda, no doubt Western Visayas will reach greater heights. Thus, she has no hesitations in supporting Uswag Ilonggo’s directions.

Uswag Ilonggo’s mission is, “Provide stronger means for the welfare of Ilonggos and capability for development and inclusive progress in Region 6” and its vision is, “A Developed, Progressive, and Premier Region in the Country.”

Uswag Ilonggo Party-list’s 5-point agenda include the championing the well-being of every Ilonggo family, proper healthcare, consistent programs on infrastructure and tourism, agriculture and aquaculture development, and scholarships for the youth.

For the upcoming May 9 elections, Poe is appealing to all Ilonggos and the whole Region 6 to support and help send Uswag Ilonggo Party-list to the Congress. The senator encourages Ilonggos to unite, and go out on May 9 and vote for Uswag Ilonggo Partylist, the pride of the Ilonggos:

[For your family’s welfare don’t forget, Uswag Ilonggo Partylist, No. 99 on the ballot!]