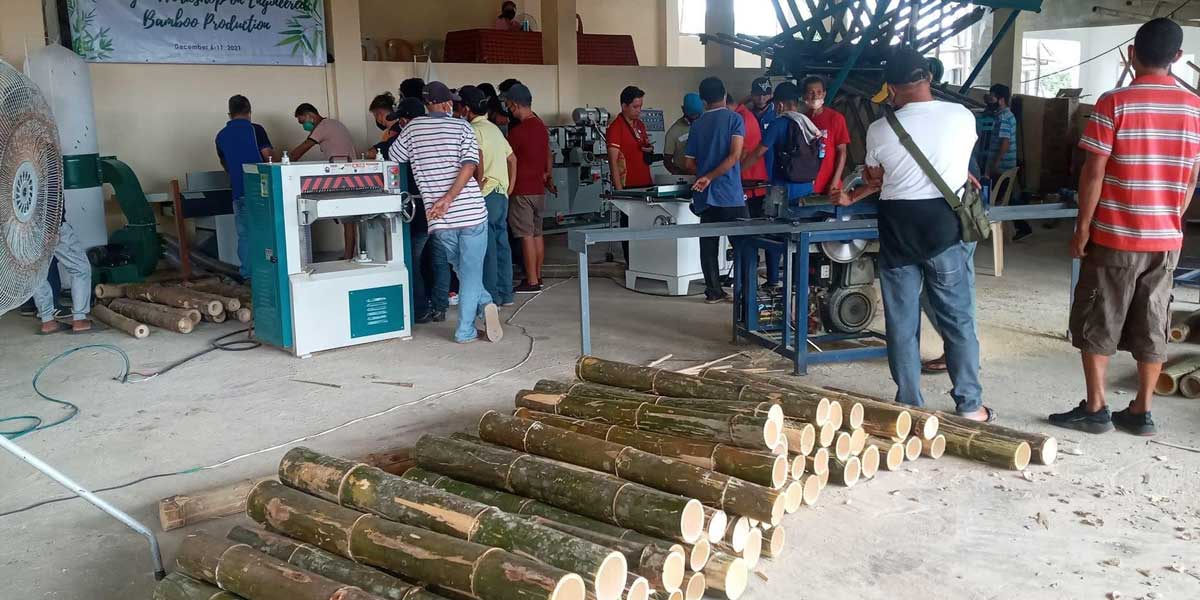 Fast-growing, renewable, and versatile are just some of attributes of bamboo.

It can be turned into furniture, used to create structures, or serve as ornaments. While it’s gaining traction as an alternative to wood, it still has some ways to go before it hits its full potential, which is why the University of the Philippines Visayas (UPV) is promoting bamboo and the industry through its initiatives.

The UPV Community-Based Bamboo Enterprise (CBBE), under the Office of the Dean of the School of Technology (SOTECH), has initiatives that include community engagement, conducting trainings, doing research, and creating partnerships to maximize the promotion of bamboo.

Bamboo is fast-growing and usually just takes an average of five years for it to be ready for harvesting compared to trees that take about twice the number of years to mature. Because of this, it’s easier to plant them in bunches.

Once bamboo decomposes, the carbon dioxide it has collected will return to the atmosphere. But this can be avoided if bamboo is processed into objects or furniture, for example, to ensure that carbon dioxide is retained, Bautista said.

“The more bamboo clumps you establish, you plant, the more useful it is in mitigating climate change effects,” he added.

The CBBE is currently focusing more on propagation to become major suppliers for those who are interested in planting bamboo since Western Visayas was recently declared the bamboo capital of the Philippines by former Environment Secretary Roy Cimatu.

Bautista said that experts and initiatives on bamboo should be abundant in the region because of that.

The CBBE conducts trainings with farmers by teaching them how to propagate bamboo, manage clumps once they grow, and eventually process them to create bamboo straws and crafts.

One of the initiatives of the CBBE is engineered bamboo, which is “bamboo that is in the form of lumber,” said Bautista.

Planks and slats are created to be used for frames, tables, chairs, and sofa sets. These are just some of the most commonly produced objects from engineered bamboo.

This was made possible through the Department of Trade and Industry’s Shared Service Facility (SSF), a flagship project of the department aimed at improving Micro, Small, and Medium Enterprise’s productivity and efficiency through better access to technology.

Through SSF, DTI is able to help out communities, farmer organizations, and their respective industries.

Bautista said, “this one particularly focuses on the processing of bamboo – so bamboo processing ultimately towards engineered bamboo production.”

Engineered bamboo is one of the specializations of the CBEE.

Bautista personally has been quite active in helping UP Visayas take the lead in promoting bamboo initiatives which is why he reached out to the Bamboo Bootcamp organizers based in Mindanao.

Bamboo Bootcamp is a non-profit NGO on a mission to make a better world through bamboo.

“It’s a big thing, and all of these efforts, we’re hoping, that this will pay off later, not only for UPV but for the whole region in terms of bamboo activities,” Bautista said.

UPV’S GOAL TO TAKE THE LEAD

Bautista said UPV should be gunning to become the leading institution with regard to bamboo innovation and development.

“We have to stand and become great in whatever applications or areas we’d like to invest our efforts and people, resources into,” he said.

He also credited former UPV Chancellor Dionisia Rola since it was initially her dream to have all of these initiatives in place.

The goal is to raise the value of bamboo and disprove those who undermine it, said Bautista.

“So little by little, people are becoming appreciative of bamboo, but of course, we need to show them, we need to give them proof that bamboo is an industry that the Philippines should capitalize on,” he said. (Carlson B. Alelis/UPV-IPO)