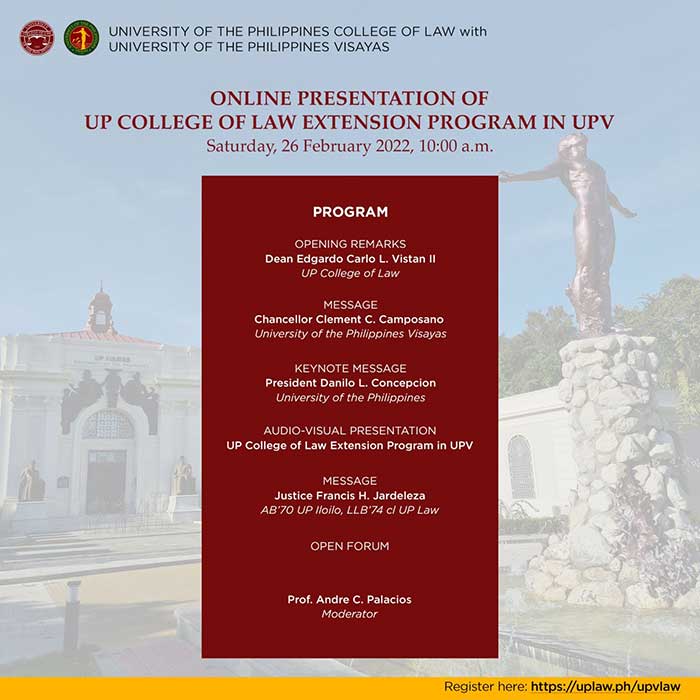 The University of the Philippines in the Visayas (UPV) partnered with the UP College of Law based in UP Diliman campus to celebrate the national university’s presence in the city and province of Iloilo with a book launch by one of the country’s foremost authorities in international law.

The first two chapters include legal instruments in the Spanish and American colonial eras, including war declarations, independence proclamations, and domestic and international court decisions, among others.

Chapters 3 talks about territorial claims, and Chapter 4 talks about the country’s consent to the International Court of Justice’s (ICJ) compulsory jurisdiction, the Manila Declaration, and the Pacific Settlement of Disputes, among others.

Chapter 5 is an expansion of the fourth chapter, wherein the application of laws based on the ICJ statute is discussed.

The book also discusses the history of United States’ military bases in the country, human rights decisions on claims, reparations, and their effectiveness against historical revisionism, immunity of states and international organizations, extradition, and international criminal law.

“In merely 482 pages, this volume tells the story from the beginning of the Philippine state in its revolution against Spain, until international law’s most recent development, international criminal law. (sic) The considerable virtue of this book is that it presents the actual primary materials that give the most authentic picture of this history,” said Australian international law scholar Philip Alston in the book’s foreword, as read by UP Law Center Institute of International Legal Studies director Rommel Casis.

In his message, Pangalangan remarked that the event was both personal and professional to him.

He mentioned that the family of his wife, Atty. Elizabeth Aguiling-Pangalangan, hails from Jaro in Iloilo City, and that he himself had been visiting Iloilo while the Miagao campus was being developed.

The former international judge explained that the book aims to address the challenge of disinformation and nationalism primarily in the realm of international law in relation to the Philippines.

“The approach that I chose for the book, effusing primary materials to address issues, actually addresses a fundamental challenge to the discourse today, which is a tendency toward fake news and toward bypassing facts in the analysis of issues,” Pangalangan said.

“What I wanted to address was the shifting attitude toward precisely the recourse to international [law] and the prevailing definition of ‘nationalism’ in Philippine discourse today,” he added.

The launch also celebrates the 75th year of UP’s presence in Iloilo. The state university’s first campus in Iloilo was founded in 1947 at the old Iloilo City Hall, which still serves as the city campus’ main building until this day.

In his welcome message, UPV Chancellor Dr. Clement Camposano called the launch as “fitting”, given the extension of the century-old law school’s new extension to the Iloilo City campus, as well as the contributions of the campus to the city and province of Iloilo.

“UP is an integral part of Iloilo’s history, and we certainly want to be part of its continuing growth story, and it gives me pride and honor to host events like this, because it shows the readiness, willingness, and enthusiasm of the university to be part of this larger celebration. It affirms our commitment to Iloilo as a growing community,” Camposano said.

UPV alumnus Iloilo Governor Arthur Defensor Jr. also expressed his curiosity over the contents of the book, saying that he was “excited” for the launch.

Senator Sonny Angara, a UP Law alumnus who also sent his congratulations during the launch, said that the book would be “instrumental” to the study of international law.

“This volume will be welcome in an evolving field like international law, where the sources are so varied, and there’s a need to really collate the materials to educate future generations as it is not as quite as simple as domestic law where one consults the black-letter law,” Angara said.