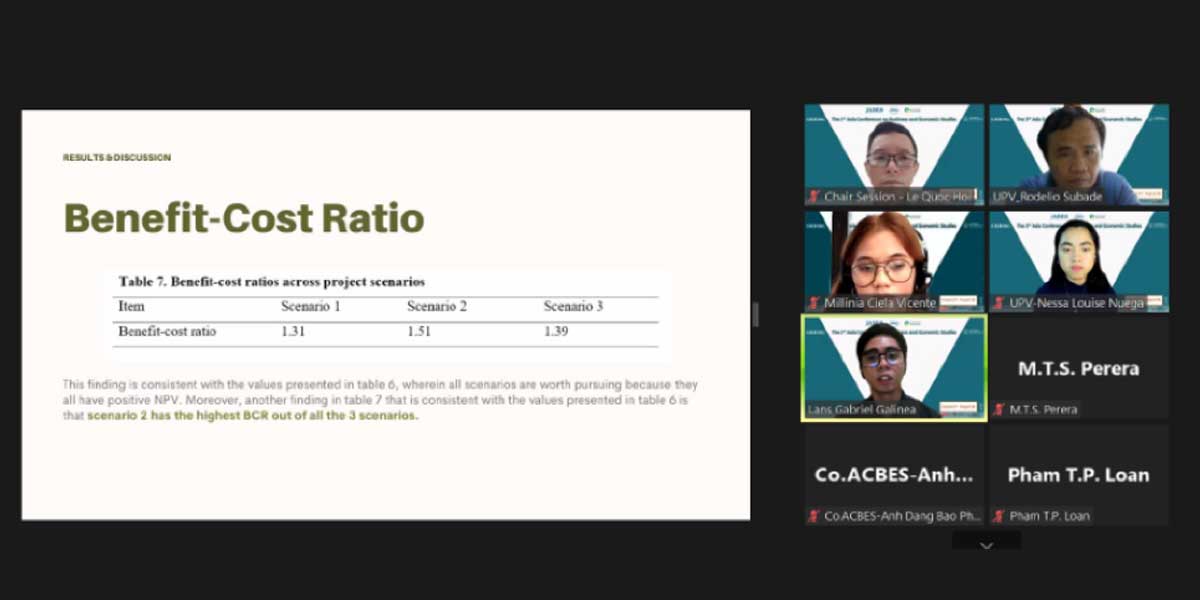 Three incoming fourth-year BS in Economics students from the College of Arts and Sciences in UP Visayas presented their paper in the recently concluded 3rd Asia Conference on Business and Economics Studies (ACBES).

Lans Gabriel L. Galinea, Millinia Ciela R. Vicente, and Nessa Louise S. Nuega, together with their subject adviser, Prof. Rodelio F. Subade, discussed the paper, Will Solar Power Irrigation generate Net Benefits?: A Case in Agusan del Sur, Southern Philippines. Along with them were other researchers with works focusing on COVID-19 and production economics (Session 27A-6).

“In our study, which was initially our term paper for our project evaluation elective, we applied financial benefit-cost analysis to evaluate the solar-powered irrigation system (SPIS) project of the Department of Agriculture (DA) in Brgy. Sinobong, Veruela, Agusan del Sur. This was done to produce information that could help the stakeholders of the project, particularly the DA, in determining whether or not to continue the operation of the project from the perspective of its farmer-beneficiaries,” Galinea explained.

Their study showed that the farmers’ use of the SPIS increases their annual rice yield, and therefore, their annual gross revenue. Having the highest net present value and benefit-cost ratio out of all the scenarios considered in the analysis, their study concluded that the farmer-beneficiaries are better off using the government-funded SPIS in their rice production. Thus, the group recommended the continued utilization of the Sinobong SPIS and as well as for continued government support towards agricultural development projects, specifically SPI systems.

The worsening effects of climate change in the country’s agriculture sector, coupled with the pressing concern of ensuring food security, highlights the importance of using economic tools and models in policymaking and program development and other fields to address those problems, particularly in developing countries such as the Philippines.

The 3rd Asia Conference on Business and Economics Studies was held last August 26 (Thursday) to 28 (Saturday) live via Zoom. This year’s ACBES was organized by the Journal of Asian Business and Economic Studies with Lincoln University in New Zealand. The event was sponsored by the University of Economics Ho Chi Minh City (Vietnam) with its co-partners Taylor’s University (Malaysia), Emerging Markets Society (United States), and Centre for Industrial Revolution and Innovation (CIRI).

ACBES aims to provide and expand opportunities for researchers in the field of business and economics from Asia and other countries worldwide.