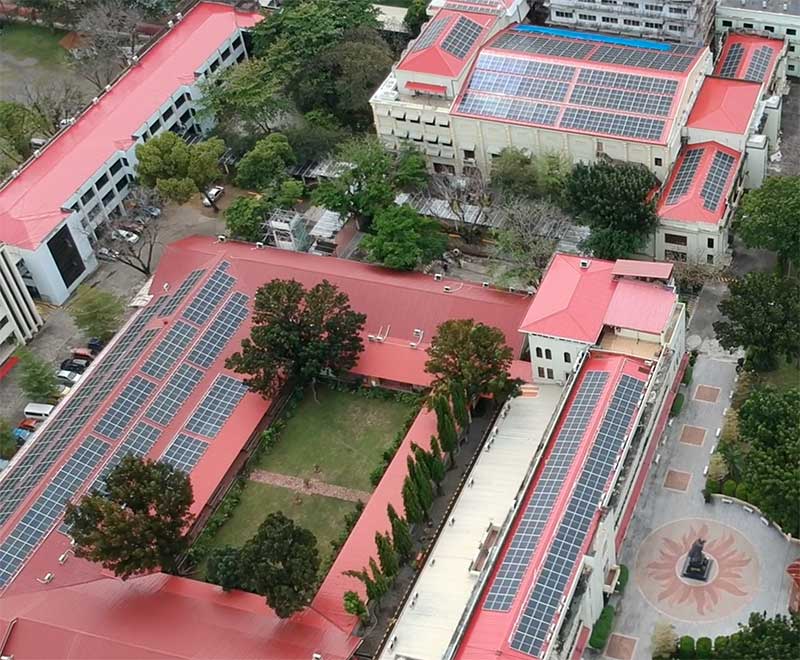 The availability of solar energy in our country makes it a highly appealing source of electricity.

Solar energy refers to the energy derived from solar radiation that can be converted into useful thermal or electrical energy.

Along this line, the University of San Agustin contracted for the installation of a Solar Power Facility in its campus in Iloilo City.

It was completed and energized on Jan 3, 2022 in a simple but meaningful ceremony attended by the Augustinian Friars and the Management Council led by the President, Rev. Fr. Frederick Comendador, OSA, and the Community Prior, Rev. Fr. Jonas Mejares, OSA.

It will save around 1,310 kilotonnes of CO2 (Carbon Dioxide) or over 3 billion kilos of emission per year.

Considering that the contract has a term of 25 years, it will give a net savings of around 30,130 kilotonnes of CO2 or 131 billion kilos.

This is the University’s contribution to the reduction of carbon dioxide in Iloilo City.

The exploitation of solar energy is in line with the policy declaration in Republic Act 9513 or the Renewable Energy Act of 2008 which provides  that the state shall promote the “Green Energy Option” or to empower end-users to choose renewable energy in meeting their energy requirement.

The law also underscores the policy to encourage the development and utilization of renewable energy resources as tools to effectively prevent or reduce harmful emissions and thereby balance the goals of economic development with the protection of health and the environment.

But going solar is not just about social responsibility and environmental protection.

Businesses around the world are now opting to own solar rooftop installations to protect and sustain growth against electrical price surges and the problem of supply of the traditional energy resources.

Aside from its contribution to the environment, the Solar Facility will give the University significant savings from its electric bill during the pandemic.

The savings will increase further once the face-to-face classes will resume and the air-conditioning units in all the classrooms will be used again.

The size of the solar system installation is 816.2 kwp (Kilo Watt Power). This is its solar generation capacity.

It has 1,855 pieces of photovoltaic solar panels and 7 pieces of String Inverters.

The panels are installed in the rooftops of nine (9) buildings in the University campus. The building blocks of a photovoltaic system are the solar cells, an electric device that can directly convert photons energy into electricity.

It absorbs and converts sunlight into electricity. The polycrystalline solar panels have a lifetime of not less than twenty-five (25) years.

The Solar Facility was installed without any expense on the part of the University.

The costs of the solar panels, inverter and all other equipment were shouldered by the solar company, ET VIVANT SOLAR CORPORATION.

It will also pay for the cost of operation, maintenance and upkeep. All permits, certifications, licenses, taxes and other requirements, compliance with the Philippine Grid Code and other applicable laws were obtained or undertaken by the said corporation.

The only expenditure on the part of the University is to pay for the electricity produced by the solar facility at a rate lower than the per kilowatt hour being charged by the local retail electricity supplier, MORE POWER.

Moreover, the Power Purchase Agreement stipulates that the contract is for a term of 20 years after which, the ownership, control and custody of the entire Solar Power Facility will be automatically transferred to the University without any cost

ET-VIVANT SOLAR CORPORATION, is a leading provider for the development, engineering, procurement, construction, operation and maintenance services for solar generation facilities in the Philippines and other countries.

Its industry classifications are electric power generation, transmission, and distribution.

ET-VIVANT SOLAR was represented by its Project Manager Glad Rendal during the energization ceremony.

During the contract negotiation, the corporation was led by President/CEO, Lee Kevin Lamela and Business Development Manager Maureenele Lago.

The corporation was represented in the Power Purchase Agreement by its Chief Operating Officer Mark Habana.

ET-VIVANT is a SEC registered domestic corporation. It has its principal business address at Fort Bonifacio, Taguig City.