This is based on the generated data of the Consumer Price Index (CPI) from the Retail Price Survey (RPS) of Commodities conducted by the Philippine Statistics Authority (PSA).

The Data showed that the average inflation for January to November 2022 was at 6.9 percent, higher than the 6.7 percent average last month.

“The downtrend in the Transport inflation to 7.6 percent from 14.3 percent a month ago was due to the slower year-on-year price increase of the passenger transport by sea and inland waterway at 29.3 percent from 38.6 percent in October 2022,” Provincial Statistics Officer Nelida B. Losare said.

Losare also expounded that three commodity groups had an inflation rate of more than one percent but less than 6.0 percent: Clothing and footwear (3.0%), Housing, Water, Electricity, Gas, and Other Fuels (3.6%); and Furnishing, Household equipment, and routine household maintenance (5.2%).

The 3.6 percent inflation of Housing, Water, Electricity, Gas, and Other Fuels, was mainly due to the price indices of Electricity from All Sources: Coal, Solar, Hydro, etc (10.3%); Door fittings, power sockets, wiring flex (6.9%); tempered by the Wood Bamboo and Charcoal (3.0%). 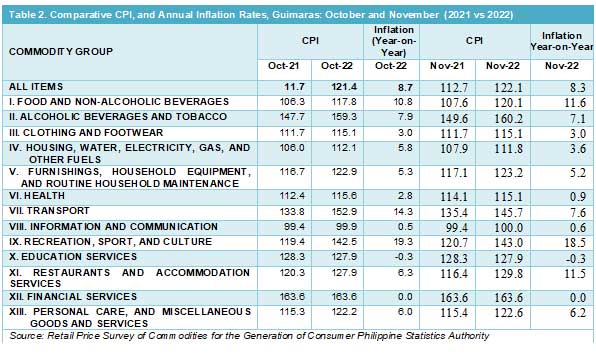 Losare also explained that the 7.1 inflation in Alcoholic Beverages and Tobacco was mainly due to the price movements of Cigarettes (11.6%) and; Spirits and Liquor (2.4%).

“The 18.5 percent inflation of Recreation Sport and Culture slowed from 19.3 a month ago due to 8.6 and 39.0 percent price decrements in the drawing and painting materials; and other stationery and drawing materials, respectively,” Losare said.

“The inflation of Furnishing, Household Equipment and Routine Household Maintenance slightly decreased from 5.3 percent in October 2022 to 5.2 in November 2022 due to the price changes on Insecticide, Pesticides, and Fungicides at 1.1 percent; and Cleaning and Maintenance Products at 1.6 percent,” Losare added.

Losare also elaborated that there were three commodities that showed faster inflation rates in November 2022, these are Recreation, Sports and Culture (18.5%); Food and Non-Alcoholic Beverages (11.6%); and Restaurant and Accommodation Services (11.5%).

Losare further explained that only the Commodity groups of Clothing and Footwear; Education Services; and Financial Services maintained their previous month’s inflation at 3.0%, -0.3%, and 0.0%, respectively.

The 8.3 percent inflation rate in November is the fourth highest year-on-year rate recorded since 2019, implying faster price increments of more than double over a year. (See table 3.) 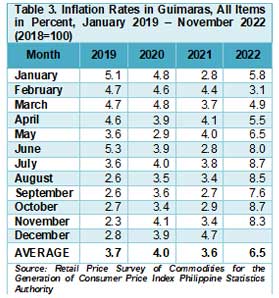 “A CPI of 122.1 means that an average Guimarasnon household needs 22.1 pesos more in November 2022 to buy a basket of goods worth 100 pesos in 2018. The CPI is used to compute the inflation rate for a given period,” Losare simplified.

Meanwhile, Losare cited that the average Purchasing Power of the Peso (PPP) in November 2022 at 0.82 is lower when compared to the previous year’s 0.89, illustrating that the purchasing power of the peso depreciated, thereby interpreting that the one peso in 2018, is now valued at 0.82 centavos.

“The 0.82 PPP of Guimaras remained unchanged since October 2022,” Losare said.