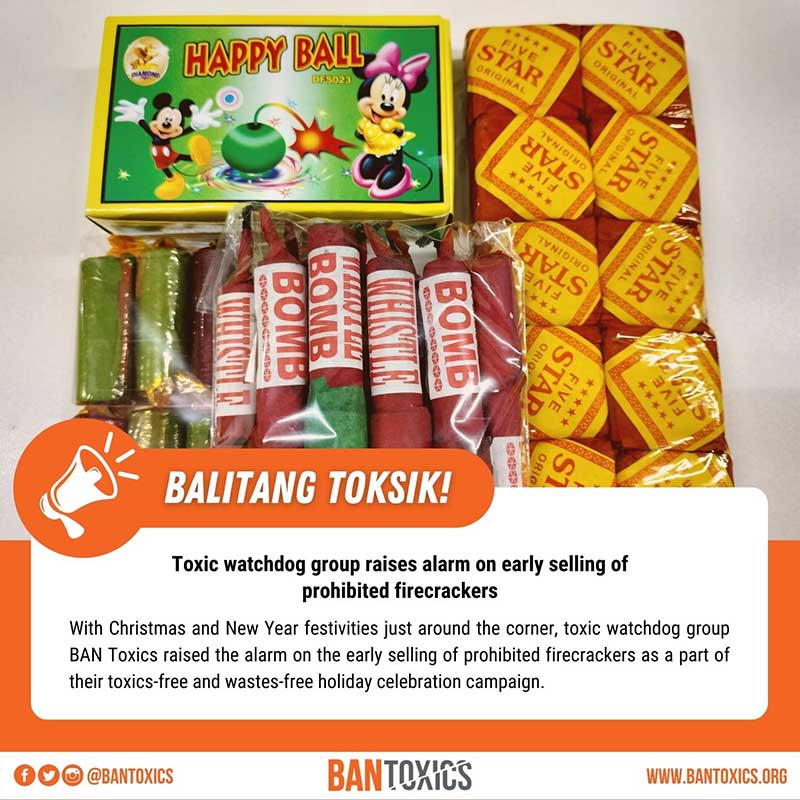 With Christmas and New Year festivities just around the corner, toxic watchdog group BAN Toxics raised the alarm on the early selling of prohibited firecrackers as a part of their toxics-free and wastes-free holiday celebration campaign.

Executive Order (EO) 28, signed by then President Rodrigo Roa Duterte, authorizes the Philippine National Police (PNP) through its Director-General to determine what constitutes prohibited firecrackers and other pyrotechnic devices. EO 28 also allows PNP to promulgate rules and regulations necessary to regulate and control their use.

Section 3 of EO 28, or the Prohibited Types of Firecrackers and Pyrotechnic Devices, states that “the manufacture, sale, distribution and use of other types of firecrackers and pyrotechnic devices not mentioned in the foregoing section, of such explosive content that could endanger life and limb, such as Atomic Big Triangulo and Super Lolo and their equivalent are hereby prohibited.”

“It is high time for the PNP to issue at the earliest the list of prohibited firecrackers to stop its manufacture, sale, and distribution, and prevent firecracker-related injury and toxic exposure among children,” he added.

According to Department of Health (DOH), the chemicals and substances present in firecrackers are cadmium, lead, chromium, aluminum, magnesium, nitrates, nitrite, phosphates and sulfates, carbon monoxide, copper, manganese dioxide, potassium, sodium, zinc, oxides of nitrogen and sulphur. Exposure to these toxic chemicals can potentially damage the nervous and respiratory system.

“We support the Iwas Paputok campaign of DOH since it is aligned with our toxics-free and wastes-free celebration advocacy. The strict implementation of EO 28 and RA 7183 is essential to prevent and reduce firecracker-related injury during the holiday season,” the group added.