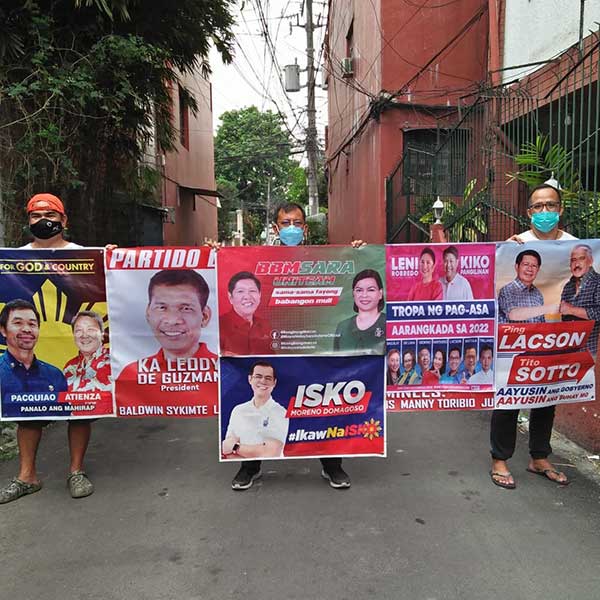 As the whole country bears witness to the raging election fever as the May 9 polls near, the toxics watchdog group EcoWaste Coalition appealed to the government to phase out cadmium use in plastics such as tarpaulin posters to protect public health and limit cadmium’s release into the environment.

Cadmium, which belongs to the World Health Organization’s list of “10 chemicals of major public health concern,” is toxic at very low exposure levels mainly affecting kidneys and the skeleton. It is classified as a human carcinogen.

As cadmium in products and materials is not within the scope of the Chemical Control Order for Cadmium and Cadmium Compounds promulgated in 2021 by the Department of Environment and Natural Resources (DENR), the group asked the government to issue a supplemental directive  phasing out cadmium use in plastics as colorant and/or stabilizer,

“A supplemental regulation phasing out cadmium in plastics will be in sync with the global consensus to address the full lifecycle of plastic, including its production, design and disposal, to end plastic pollution,” said Coleen Salamat, Plastic Solutions Campaigner, EcoWaste Coalition, citing the historic resolution adopted by the recently concluded United Nations Environment Assembly where 175 nations committed to develop an international plastics treaty.

According to the laboratory tests commissioned by the EcoWaste Coalition and performed by SGS, a leading global testing company, the multicolored coatings of the analyzed tarpaulin posters of the six presidentiables all had cadmium in the range of 607 to 775 parts per million (ppm), while the white plastic sheet had cadmium between 384 to 546 ppm, way above the 100 ppm limit for cadmium in plastics under European laws.

“Win or lose, we hope candidates, especially those eyeing national posts, will support our push to get cadmium and other toxic chemical additives out of plastics for the sake of public health and the environment,” added Salamat.

Due to concerns about its toxicity and effects on human health, the European Commission in 2011 decided to prohibit manufacturers from placing on the market mixtures and articles from plastic material containing cadmium “equal to or greater than 0.01% by weight,” or 100 ppm.  Prior to this, the European PVC industry voluntarily refrained from using cadmium as stabilizer in newly produced PVC since 2001 leading to the eventual phase-out of cadmium use in PVC.

While the Commission on Elections (COMELEC) encourages poll participants to avoid campaign materials laden with hazardous substances, there is currently no national regulation regulating cadmium in plastics such as PVC-based tarpaulins.

“Parties and candidates will need a clearer guidance from the authorities on which campaign materials are free of hazardous ingredients, and we hope the COMELEC will be supported by competent agencies so it can require, not only encourage, the use of zero waste and toxics-free campaign materials in future elections,” said Jove Benosa, Zero Waste Campaigner, EcoWaste Coalition.

According to the United Nations Environment Programme (UNEP), “as awareness of the adverse impacts of cadmium has increased, many uses have been reduced significantly in industrialized countries, and waste management systems have been put in place to limit the release of cadmium into the environment.”

“In contrast, in some developing countries, some uses are increasing, and products containing cadmium are not typically collected separately from the general waste stream. Therefore cadmium discards will end up in municipal waste and disposed of in landfills, incineration, open burning or indiscriminate dumping. Some of the cadmium in these products will be released to the environment,” the agency said.

The EcoWaste Coalition had previously  warned that burning PVC tarpaulin waste in dumps, cement kilns and incinerators will trigger the formation and release of persistent organic pollutants (POPs) such as dioxins and furans, which are targeted for global reduction, if not elimination, under the Stockholm Convention on POPs of which the Philippines is a party.