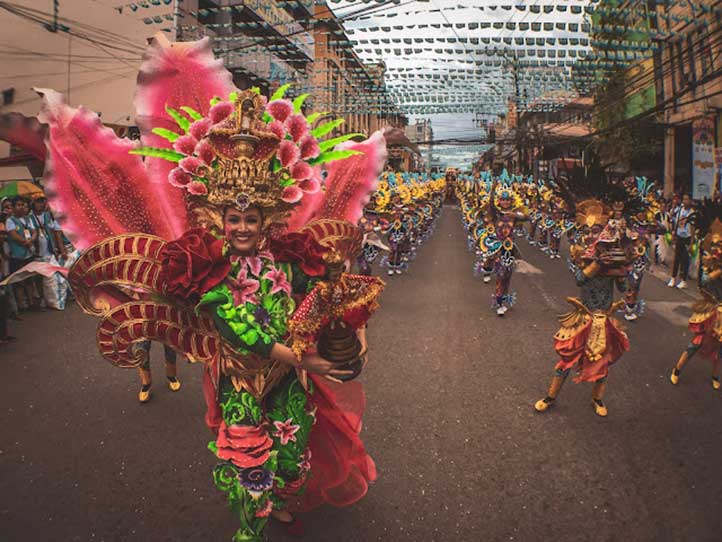 I have been looking at the first images of the Grand Parade at Sinulog Festival in Cebu this year, and something is off or missing. Is it the backdrop of the old city that makes Cebu City vibrant and alive during the Fiesta Sundays?

Despite having a very small and cramped space, with its historical and cultural significance not only for Cebu but the entire nation, the Augustinans and Cebuanos still converge in this corner to celebrate the Novena Mass and the Fiesta Señor. Bisan katung naguba ang belfry tungod sa linog, the Mass is still celebrated there. Removing the Fiesta Señor from it because of the cramped space may also remove “the sense” of that place, too. I guess that is also my peg for the Grand Parade as well.

Though the Grand Parade has been celebrated in the so-called “Uptown Cebu,” a more spacious area north of “Downtown Cebu,” that part of the city has become contiguous with the city. Osmeña (Jones Avenue) Boulevard, along with Maxilom (Mango Avenue) Avenue had been perfect for the carousel route that the celebrations like has been.

Here are some scenes from uptown Cebu City in the old carousel route: 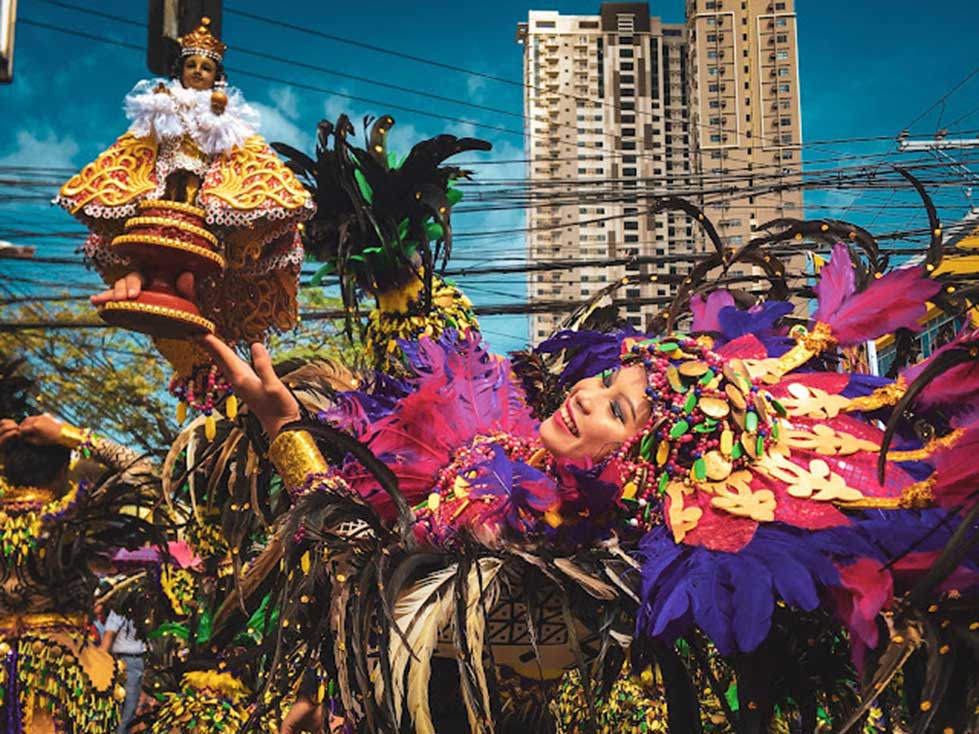 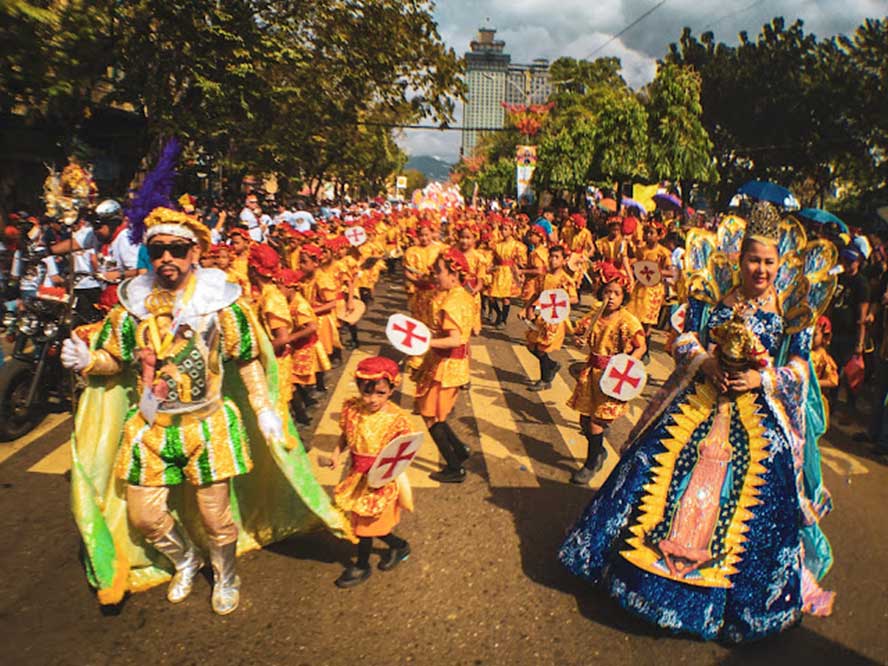 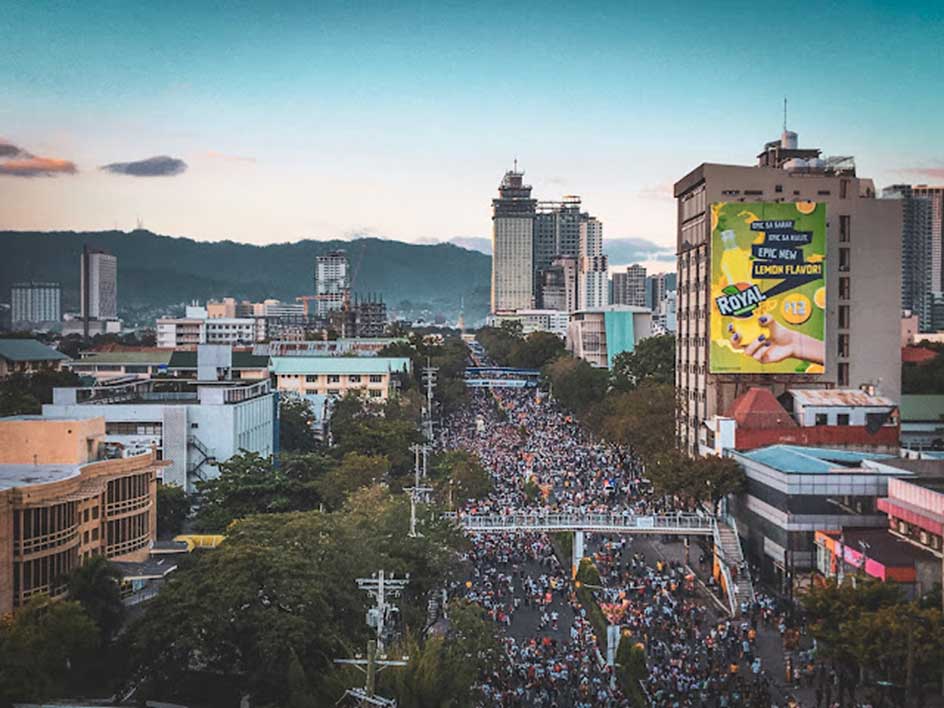 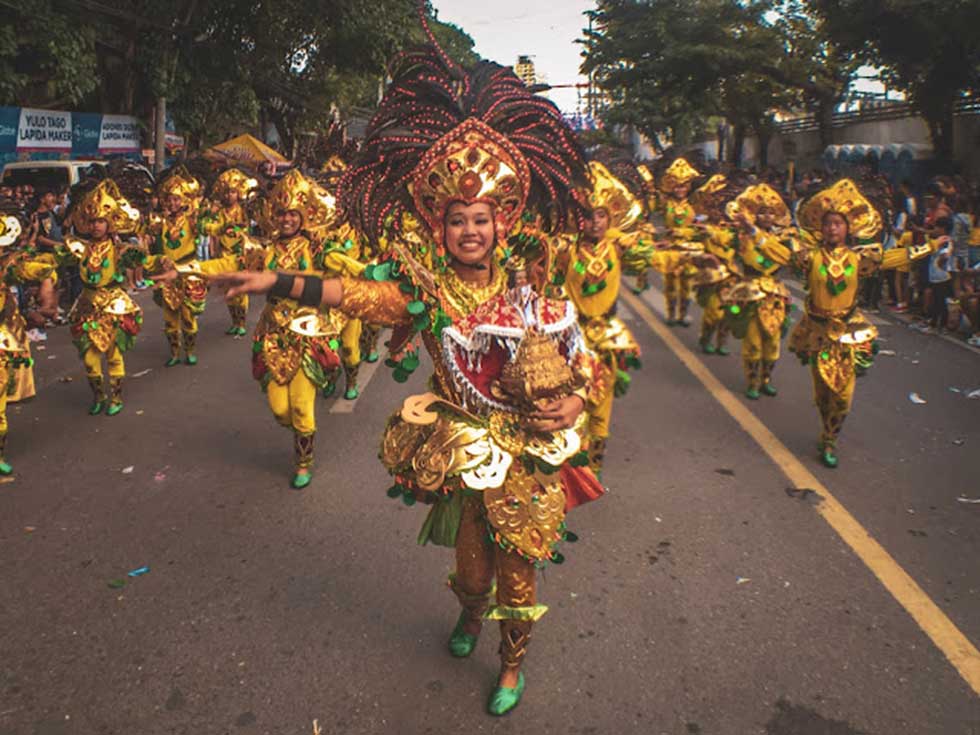 In similar cases, the old heritage buildings of Iloilo are the perfect backdrops not only during Dinagyang Festival, but other festivities too. Most people tend to be on the streets, rather than the performance areas, so are photographers, tourists, and videographers. I guess they wanted to “feel” that happy vibe. Is it because of the crowd, the scenery, the acoustics? The “vibe” or diwa is somehow drawing—like the solemn foot procession done on Visperas in Cebu, or even the Traslacion of the Poong Nazareno in the streets of Manila. I don’t like to use the word “infectious” in this era of post-pandemic world. 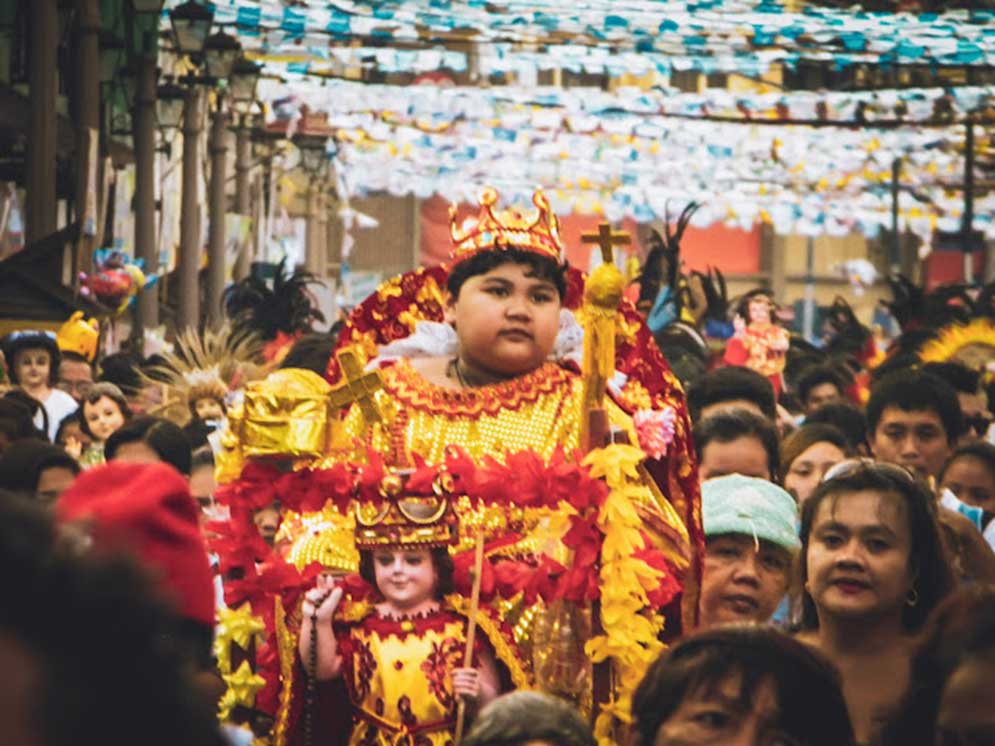 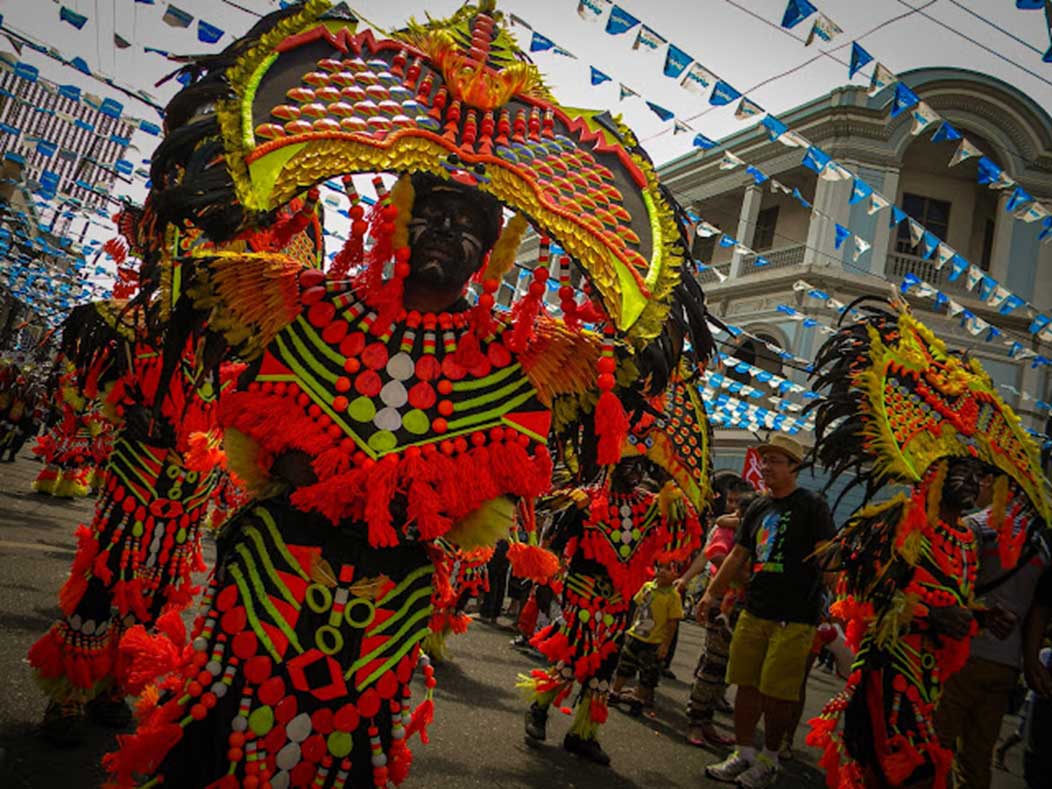 Member of the Tribu Kabog of Aklan’s Ati-Atihan as guests for the annual Dinagyang Festival in Iloilo City. Seen in the background is the International Hotel Building (S.Villanueva Building). The performances in this festivity is done at the city’s old heritage district since its inception in the 1960s.

The crowd, the cramped space, and the scenery makes a festivity and the place lively and vibrant—in photos and in-person. There is a certain charm when celebrations are held in older parts of the city. As if it is a manifestation of its identity, diwa, and kabuluhan. I guess the antiquity of the place is a product of centuries and generations of histories and stories that makes celebrations and commemorations significant to one’s place and people. Downtowns and town/city centers were made because it is a convergence point of people. There is a risk of isolating the celebrations and making it more inaccessible to the greater public, when we move these practices away from its origins. The essence of social rituals and traditions suddenly become foreign. 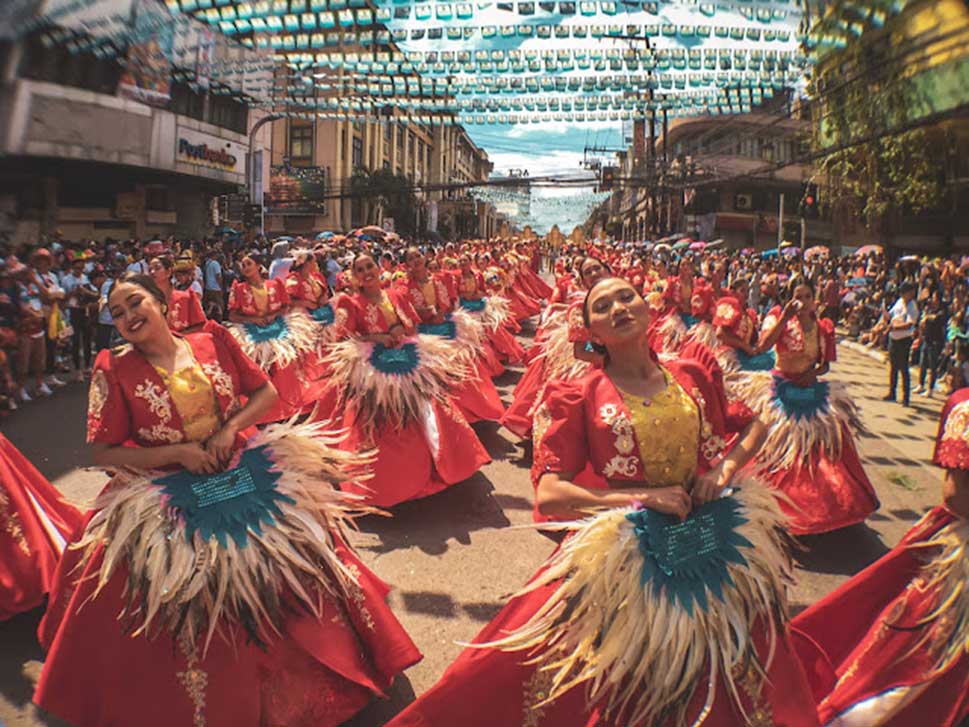 P.Del Rosario Street, or USC Downtown Campus, demarcates two of urban Cebu’s areas: The Uptown Cebu, which is often associated with wider avenues and streets and affluence, and Downtown Cebu, often associated with the historical part of the city as well as narrow roads and urban decay in some parts. This road is often the border of the Grand Parade. (Photo taken in 2020)

Let us see how SRP as a main venue of the parade will come out this year. I guess, just like Uptown Cebu was in the 1980 and 1990s, development and access to the space would gradually come over in this newer area of the city. Still, my heart belongs to the older carousel route. I guess I’m old school. 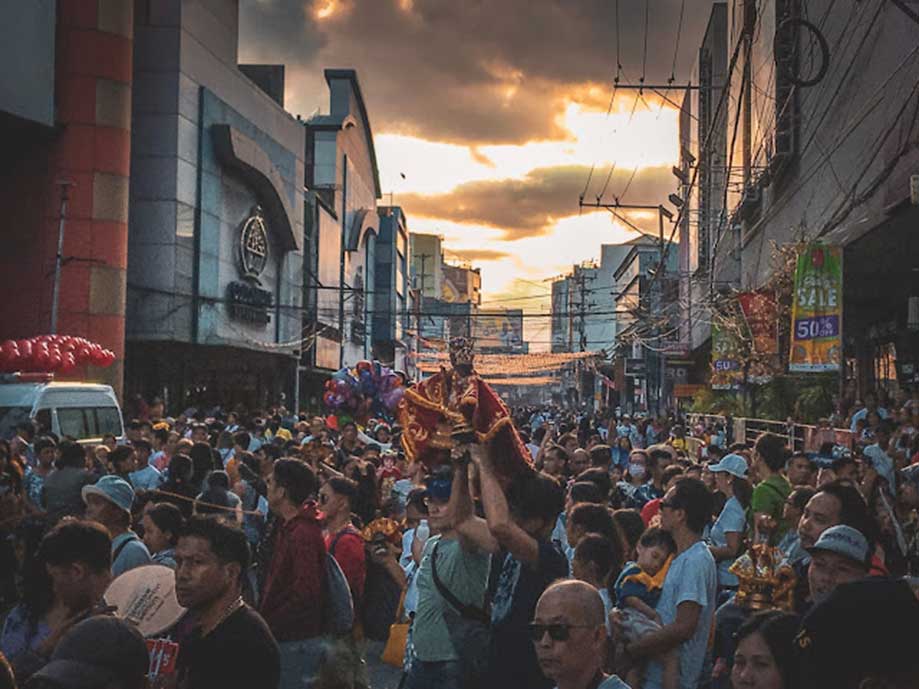 Colon Street at Downtown Cebu City during the Solemn Procession at 2020 Sinulog.

However, I am still glad that the true reason of the festivities, the Novena Mass and the Fiesta Señor, and the Santo Niño de Cebú itself, remain at the heart of the old city.

Photos from Sinulog Festival in Cebu in 2020, Dinagyang from 2014. This was first published in https://www.habagatcentral.net