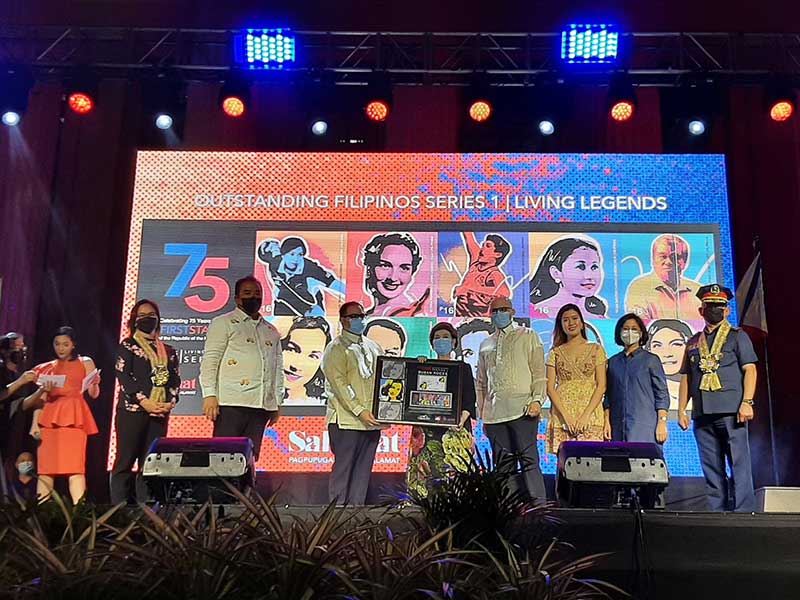 The Philippine Post Office under the Office of President Rodrigo Roa Duterte launched the Ten (10) Outstanding Filipinos Commemorative Stamps that recognize the true and most important wealth of the country- the Filipino people, in a ceremony held at the historic Manila Central Post Office in Liwasang Bonifacio, last Feb. 26.

The Post Office paid tribute to five Philippine cinema queens, two legendary Athletes, two internationally recognized scientists and one critically acclaimed painter who have uplifted the nation with their excellence.

“The Ten (10) Outstanding Filipinos honored by the Post Office have dedicated their lives and talents to the Filipino people. So they deserve to be immortalized in our stamps, to inspire not only Filipinos but every nationality who will see our stamps. We are proud of their accomplishments”, Postmaster General Norman N. Fulgencio said.

The “Living Legends – Outstanding Filipinos: Series I” which is the second of the three categories of the Philippine Stamps released by the Post Office commemorates the 75th Anniversary of the first issuance of Stamps by the Republic of the Philippines.

“After 75 years, so much has changed. We are now living in a moment in history where everything is possible and anything can spark greatness. People are the most valuable asset a country could have. We honor our beloved personalities whose talents and indomitable spirit make them true treasures”, he added.

“This is our modest way of giving recognition and paying tribute to our legends. They have tirelessly served this nation through giving joy and inspiration from their movies, pride and passion from international wins and recognitions, caring for others through their scientific innovations and all the sacrifices they have made for us”, Fulgencio said.

The Post Office also awarded the winners of the recent “First Philippine Postal Corporation Art Competition 2021” in cooperation with the Art Association of the Philippines (AAP), the oldest artist organization in the country which was founded in 1948.

Stamps and Official First Day Covers are now available at the Philatelic Counter, Manila Central Post Office. For inquiries, please call 8527-01-08 or 8527-01-32 or follow/like the facebook page https://www.facebook.com/PilipinasPhilately/ for updates.