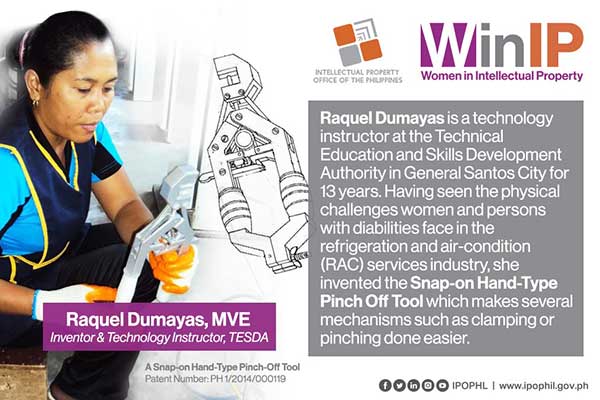 An innovator in the refrigeration and air-condition (RAC) services industry, Raquel Dumayas is proving women can harness their own unique advantages to advance in what is widely perceived as a male-dominated industry.

As a technology instructor at the Technical Education and Skills Development Authority in General Santos City for 13 years, Dumayas have seen first-hand the challenges of women in entering the RAC services industry. In particular, she saw how women had to rely on tools that require greater physical effort, which men are more capable of given their physiological makeup.

Dumayas pondered this problem, stretching her horizon to also allow the inclusiveness of persons with disabilities.

This is how she came up with a prototype called “A Snap-on Hand-Type Pinch-Off Tool.”

The tool incorporates several mechanisms such as clamping or pinching which is essential for the tightening of pipes needed in refrigeration and air-conditioning technologies.

The tool she invented, Dumayas said, could help women in RAC services do their jobs easily and even men work faster, while also encouraging persons with disabilities to be part of the industry.

“I believe that like men, women can conquer any challenge because women are innovative problem-solvers and relevant in the world of industrial technology,” Dumayas said.

But like any invention, the conception of the “Snap-on Hand-Type Pinch Off Tool” had its humble beginnings.

An Inventor Born from Simple Beginnings

Dumayas was born in a small, laid-back town in Asuncion, Davao del Norte. With dreams to be a teacher, she went to the University of Southeastern Philippines (USeP), a state university situated at the heart of the city and the ultimate choice of Dumayas’ parents mainly because of its low tuition fee.

However, during enrolment, she found that only Industrial Technology, particularly RAC Technology, was the only course with slots open. So she took that option and a new career track did not stop her from learning.

“It simply shows that when you enjoy your learning, then you will end up happy, successful, and fulfilled,” Dumayas said.

After graduating, she went to General Santos City to work as an instructor in RAC Technology at TESDA.

But to widen her scope of knowledge, she took up a post-graduate degree on Vocational Education at USeP. Here, she will build her first-ever invention which will be the subject of her thesis.

A series of rejections before success

“My greatest challenge when I was still in the process of developing my project was rejection,” Dumayas lamented.

In pitching her invention, no one, even from her own alma mater, seemed to understand what it was, and what it was for, possibly because only a few were able to empathize with the problems of women in the RAC services industry.

She had traversed the entire city in proposing her invention but no one could commit to do the fabrication, with most citing they had already committed to other technologies.

This disheartened her but she never gave up, and continued her journey towards converting her idea into a reality.

Finally, the stars aligned for Dumayas when she found that one of her trainees could translate her idea into a sketch. At almost the same time, a fellow USeP graduate, who was already a practicing machinist at the time, visited their school and heard that she was looking for someone to do the fabrication. He then offered his expertise.

With the realization of her “Snap-on Hand-Type Pinch Off Tool,” Duyamas became the only one from her 2014 batch to successfully graduate from USeP’ with a “Masters of Vocational Education.”

Her school, through its Innovation and Technology Support Office (ITSOs), also helped her take advantage of free patent filing to protect her intellectual property (IP).

Developed by the IP Office of the Philippines (IPOPHL) as the main hubs for unlocking academe’s IP and innovativeness, ITSOs are a network of higher education and research development institutions capacitated by IPOPHL to protect the academic community’s IP assets.

After achieving recognition for her invention, Dumayas was invited as the lone participant from USeP to be part of IPOPHL’s Invention Triage event in 2014, where an invention’s market viability was evaluated to ensure a successful technology transfer  with potential investors.

Moreover, TESDA has recognized the importance of Dumayas’ tool, and the impact it could have for women in the RAC industry. Today, her co-instructors and students who are women are using the tool for training activities.

Hopeful for commercialization and women’s future in RAC

Even with these achievements, Dumayas’ journey as an inventor was far from over as she now aims to commercialize her invention and bring it to a bigger audience.

But with the COVID-19 pandemic, her business plans have been put on hold. In the meantime, she’s working to make a more portable and handy version of the tool, a pursuit in which USeP’s Knowledge and Technology Transfer Division (KTTD) has expressed willingness to support.

She also continues to ​​serve as an RAC trainer while also working with technicians and shop owners in her community to create greater awareness for natural and hydrocarbon refrigerants.

Dumayas looks forward to the greater opportunities that lie ahead in her career while also hoping to inspire more women to get interested in the field of RAC.

“To all women who wish to have a career like mine, never hesitate to pursue and prove to the world that we can do it,” she said. (IPOPHL)