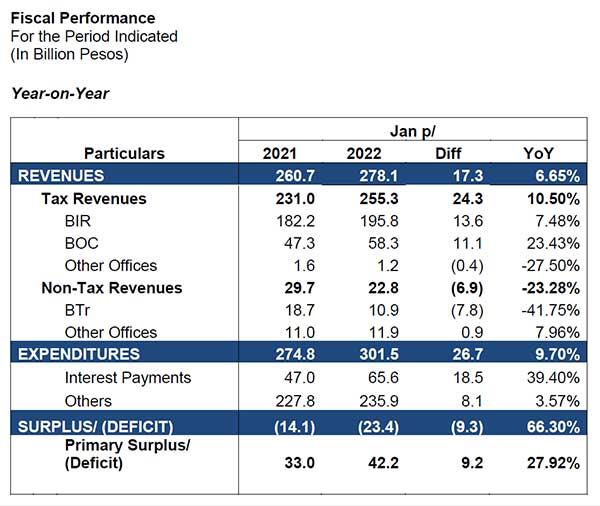 The National Government’s (NG) budget deficit for the first month of 2022 rose to P23.4 billion, up by 66.30% or P9.3 billion from last year’s shortfall of P14.1 billion. The fiscal performance for the period reflects a 9.70% growth in public expenditures alongside a 6.65% increase in revenue collection.

Collections by the Bureau of Internal Revenue (BIR) for the month was at P195.8 billion, 7.48% or P13.6 billion better against the P182.2 billion actual collections made in January of the previous year.

Similarly, the P58.3 billion collected by the Bureau of Customs (BOC) for the first month of the year improved by 23.43% or P11.1 billion from P47.3 billion posted in the same period a year ago. Improved valuation, intensified enforcement against illegal importation, improved compliance by traders to customs laws, gradual improvement of importation volume, and the government’s effort in ensuring unhampered movement of goods domestically and internationally1 drove the positive performance for the month.

Income collected and generated by the Bureau of the Treasury (BTr) stood at P10.9 billion, declining by 41.75% or P7.8 billion YoY. The contraction was attributed to the high base effect of dividend remittances of the National Transmission Corporation (TRANSCO) and PAGCOR in January 2021, which remitted P8.3 billion and P1.0 billion, respectively.

January collections from other offices (other non-tax including privatization proceeds and fees and charges) amounting to P11.9 billion was 7.96% above last year’s outturn of P11.0 billion.