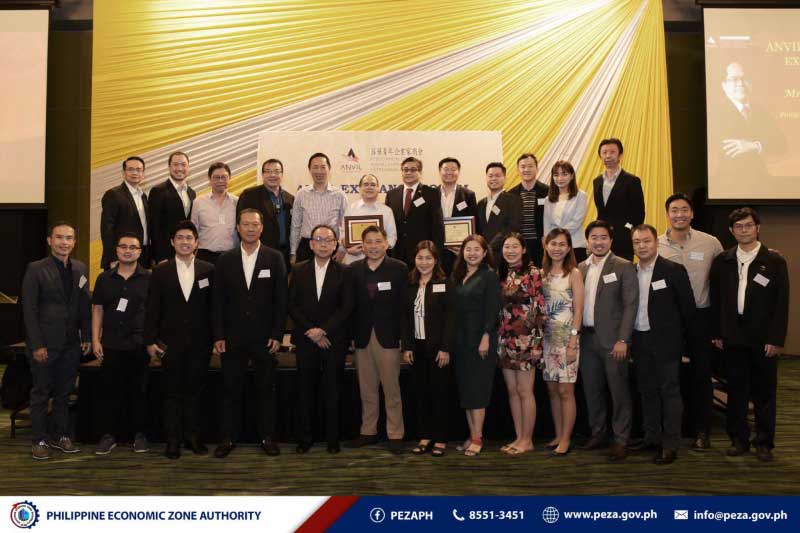 According to Panga, “We can help in the administration’s efforts to graduate to an upper-middle income economy with our partnership and more importantly, with the contributions of young entrepreneurs like yourselves in shaping the market and our future.”

“With the growth mindset of the PBBM administration, and where the Philippines is in a sweet spot to benefit from the prevailing crises, we remain committed in performing our mandate to help keep the economy afloat and contribute to the country’s overall growth and development through our ecozone program,” he added.

With the implementation of the CREATE Act, PEZA aims to take advantage of the law to also attract investors engaged in the domestic market.

“Maybe it’s about time that the government, with the CREATE as the platform, stimulate domestic production and services by giving incentives to Filipino-owned enterprises,” said the PEZA interim chief.

It is worth mentioning that some of the Anvil members engaged in the domestic market have already expressed interest in exploring business within the ecozones, including development of ecozones in rural and new growth areas.

Panga explained, “Ultimately, the domestic production contributes to the GDP. It cannot be just the exporters doing all the production. This is also a sign of strength of an economy when we see domestic output increasing. If we aggregate all these domestic producers, they are far bigger than the export producers, except that they are not aware of their incentives.”

The Anvil Business Club is an organization of young Filipino-Chinese businessmen and professionals committed in propagating positive values in promoting healthy economy and progressive society. Since 1991, they have earnestly sought to develop tomorrow’s leaders, movers, and shakers in the Philippine business society.

Advantages of Locating in PEZA zones

As a testament to PEZA’s investment promotion and facilitation efforts, Keppel Philippines Holdings, Inc. President and Director Stefan Tong and Anvil Chairman Emeritus George Siy shared their experience doing business with PEZA and inside the ecozones.

“In the late ‘90s and early 2000s, Keppel has already started being an ecozone developer and operator. What we found is that operating within the PEZA zones is very conducive to us focusing on the business and not worrying about a lot of other things. I think what DG Panga (sic) mentioned, the one-stop shop and non-stop shop, I still remember DG’s old boss, DG [Lilia] De Lima, always emphasized that,” said Tong.

On the other hand, Siy stated the experience of the garments group of Luen Thai which ventured to other countries for their operations but found themselves going back to the Philippines. He said, “They have come back [to the Philippines]. They’re saying that it’s easier to deal with the people and the administration here. These are real testimonials to the success of [the PEZA] management.”

Panga said, “Indeed, the best way really to promote investments is through a satisfied customer. Because when they’re happy, they will continue to expand in the Philippines.”

Association of Young Filipino-Chinese Entrepreneurs (Anvil) President Jayson Sze expressed, “We are confident that the current administration is actively searching for foreign investors which will help strengthen our economy. It is not a secret that the current administration is empowering DTI and PEZA as a business enabler for foreign investors.”

Complementing the PBBM administration’s efforts to promote the country as an investment haven, PEZA is also fortunate to be part of the investment promotion missions organized by the government.

Panga said, “The reason why we are involved in the missions is because the investors are really looking for PEZA. PEZA provides the best business ecosystem in the ecozones for efficiency-seeking locators from around the world.”

“With the support of our partner institutions and private sector partners like Anvil, we will continue to enhance our ease of doing business so we can attract more investments and create more jobs and livelihood for the Filipinos. In doing so, we are not only able to thrive in the new reality but more importantly contribute to the President’s bid to transition the country to upper-middle income economy,” noted the PEZA OIC.

It is worth mentioning that as of 2022, there are a total of 160 registered Chinese companies in PEZA contributing PhP 25.446 Billion investments or 0.94% of the total investments in PEZA. These companies also generated US$ 358.434 Million exports and created 15,724 direct jobs.

Anvil also echoed the urgency of appointing a permanent director general of PEZA to ensure the implementation and unhampered operations of the agency in promoting and attracting more investors in the country.

According to Anvil Chairman Wilson Lee Flores, “Many IT-BPOs, foreign investor business groups and professional groups, even PEZA employees, have publicly called for the President and the national government to permanently appoint [OIC Panga] as the Director General of PEZA.”

“He is a very good career official who is with PEZA, one of the most progressive and pro-business institutions. He is behind of the many of the progressive policies that are very important for ecozone development for inviting foreign direct investments,” he noted.