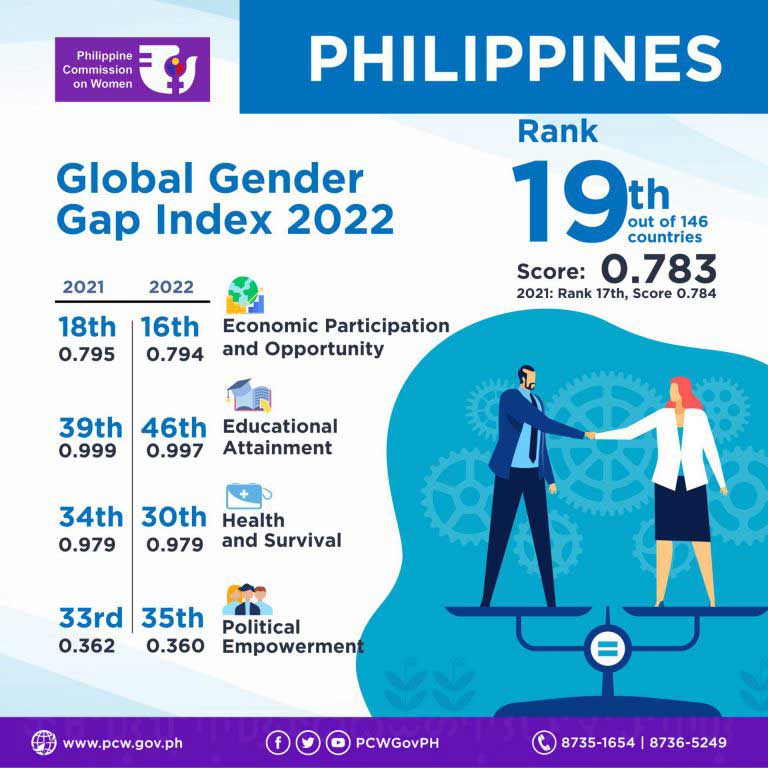 The Philippines remains the best performing country in Asia in terms of gender parity although it slid down two notches in the Global Gender Gap Report of the World Economic Forum.

The Report shows that the country dropped from the 17th to 19th spot in the general ranking out of 146 countries, giving way to new entrants in the top twenty tier.

Notably, the Philippines is still at the second place in the whole of East Asia and the Pacific next to New Zealand.

Moreover, the country is still leading among its Asian counterparts, being the only Asian country in the top twenty, with Singapore and Lao PDR ranking 49th and 53rd, respectively.

The Global Gender Gap report tracks the progress of countries in achieving gender parity in terms of economic participation and opportunity, educational attainment, health and survival, and political empowerment.

The Philippines fared fairly high in the worldwide rankings since the WEF started releasing the annual report in 2006 when the country ranked 6. Since 2006, the country has been a constant placer in the top twenty.

In 2021, the report stated that the Philippines virtually closed the gaps in Health and Survival and this remains true in the 2022 report. The score for health and survival stayed at 0.979 and the Philippines’ rank improved from 34th last year to 30th.

In terms of economic participation and opportunity, the country climbed two spots from 18th to 16th but its score went from 0.795 to 0.794. WEF noted that “while the entire labor force was impacted in 2022, the share of women participating in the workforce was still 24.5 percentage points lower than the share of men.”

The biggest improvement is needed in the aspect of political empowerment.  The country scored 0.360 from the previous 0.363 and dropped two notches from 33rd to 35th. “Gender parity for legislative, senior officers and managers, as well as for professional and technical workers, remains constant,” stated the report.

The key dimension with changes in the score is educational attainment. In the previous report, the Philippines already virtually closed the gaps in this aspect with a 0.999 score. However, this year, this number tilted to 0.997 and the country’s ranking dipped from 39th in 2021 to 46th in this year’s report.

Looking into the data, the Department of Education’s Enhanced Basic Education Information System showed that in 2018, the net enrolment rate in elementary education was at 93.9 for females compared to 94.3 for males. In the latest Philippine Statistics Authority’s Fact Sheet of Men and Women, the net enrolment rate for females in elementary school is at 89.3 and 88.9 for males.

Now, what must be done?

With the Philippines remaining at the top twenty tier of Global Gender Gap Index since 2006, the PCW urges all key movers to take this as a challenge and as a motivation to double time in their efforts to mainstream gender in all sectors and in all programs, activities, and projects.

PCW Executive Director Atty. Kristine Rosary E. Yuzon-Chaves calls on the partners in the education sector to look into the findings and analyze how gender equality can further be promoted.

With the still sheer numbers in women’s political empowerment, ED Yuzon-Chaves also sees the Report as an opportunity to increase women’s participation and representation in leadership, politics, and governance.

“While the Philippines is still the leading country in Asia in terms of pursuing gender parity, there are gaps that need immediate and adequate attention.  We shall keep this Report in mind as we work with our partners in the education sector in ensuring that women and girls receive equal and fair treatment when they pursue learning. We also continuously rally behind every Juana whose potential must be tapped in driving the country to growth, development, and inclusion,” ED Yuzon-Chaves said.

The 2022 Report shows that at the current rate of progress, with the global gender gap being closed by only 68.1%, it will take 132 years to reach gender equality worldwide.

Across the 146 countries covered by the 2022 index, the Health and Survival gender gap has closed by 95.8%, Educational Attainment by 94.4%, Economic Participation and Opportunity by 60.3%, and Political Empowerment by 22%.

“Based on the evolution of the global average scores for each subindex over the past 16 editions for the constant sample of 102 countries, at the current rates of progress, it will take 155 years to close the Political Empowerment gender gap, 151 years for the Economic Participation and Opportunity gender gap, and 22 years for the Educational Attainment gender gap,” the report adds.