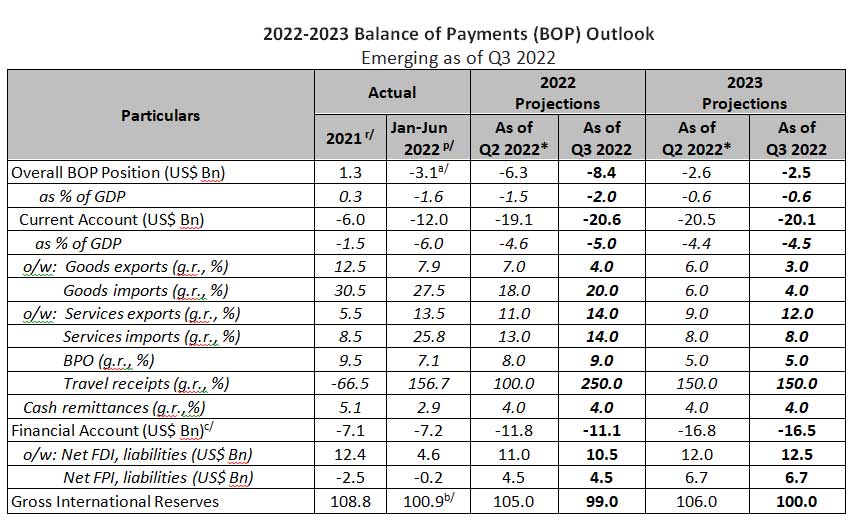 The Monetary Board approved the new set of 2022 and 2023 balance of payments (BOP) projections during its 16 September 2022 meeting. The current set of BOP projections incorporates latest available data and recent emerging developments.

The emerging BOP outlook over the near term remains subdued as external risks have intensified relative to the last forecast round in June 2022. These risks of further downward revision in global growth prospects, record-high inflation print worldwide, more aggressive monetary policy tightening by major central banks, continued economic slump in China, and lingering Ukraine-Russia conflict, among others, are expected to broadly weaken global demand conditions, and hence, the country’s external sector. In particular, these are expected to moderate the growth in merchandise exports and, along with increased imports, will result in a further widening of the goods trade gap.

While tighter global financial conditions are expected to restrain inward financial flows, there continues to be some optimism on the domestic front that could partly offset the impact of elevated external risks on the BOP. Foremost of which is the Philippine economy’s solid macroeconomic fundamentals with strong recovery momentum in the first half of this year following increased mobility and expanded vaccination coverage. This, along with the expected revival of foreign travel receipts, sustained resilience of overseas Filipinos (OF) remittances and business process outsourcing (BPO) revenues, as well as inflows from foreign direct investments are expected to positively contribute to the external sector outlook.

Goods imports are expected to continue to outperform goods exports with growth forecasted at 20.0 percent on the back of elevated international commodity prices and increased import requirements given resumption in domestic economic activities. Meanwhile, goods exports are seen to expand by a more modest rate of 4.0 percent amid expectations of continued softening of global demand, persistent supply bottlenecks, and the rise in input costs. On the other hand, growth forecasts for services exports and imports have been revised upward to 14.0 percent each (from 11.0 percent and 13.0 percent, respectively) based on stronger-than-expected recovery in travel receipts and BPO revenues in the first half of 2022 following the further reopening of the domestic economy and easing of travel restrictions for foreign tourists beginning February 2022.

The forecast for OF cash remittances is retained at 4.0 percent in line with its long-term growth trend and its demonstrated resilience, rising OF workers’ deployment on the back of renewed hiring interest for OFWs, and increased use of digital financial services by OFs and their beneficiaries.

The financial account is anticipated to continue to register net inflows, albeit lower at US$11.1 billion from the previous projection of US$11.8 billion. Key drivers supporting this outlook are the sustained uptrend of non-resident foreign direct investments (FDI) inflows of US$10.5 billion and foreign portfolio inflows of US$4.5 billion fueled by planned issuances of initial public offerings (IPOs).

The emerging 2022 GIR is seen to settle at US$99.0 billion (7.5 months import cover) lower than the previous forecast of US$105 billion (8.0 months of import cover), reflective of the latest actual data as well as the buildup in external risks that could weigh on the country’s major sources of foreign exchange.

For 2023, the overall BOP is seen to be broadly unchanged from the previous deficit forecast at US$2.5 billion (-0.6 percent of GDP), underpinned mainly by expectations of sustained inflows in the financial account supported by improved business and consumer sentiments for next year, resilient domestic demand, and continued operationalization of key legislations aimed at improving the country’s overall investment climate alongside narrower current account deficit.

The current account is seen to post a narrower deficit of US$20.1 billion (-4.5 percent of GDP), as the trade-in-goods gap is expected to taper next year, with goods exports and imports growth forecasted at 3.0 percent and 4.0 percent, respectively. The foreseen sustained recovery momentum of trade in services, particularly tourism and BPO sectors, which are projected to expand by 150 percent and 5.0 percent, respectively, as well as the steady inflow of OF remittances at 4.0 percent, are expected lend some offsetting effect to the current account imbalance. As the COVID-19 situation becomes more manageable and international travel restrictions further lifted across jurisdictions, both international tourism and OF workers’ deployment prospects will remain favorable. The release of the updated IT-BPO industry roadmap for the next six years is likewise anticipated to provide renewed guidance on identified growth strategies for the IT-BPO sector’s sustained robust performance in the medium term.

Meanwhile, FDI and FPI inflows are anticipated to reach US$12.5 billion and US$6.7 billion, respectively, given the expected steady recovery in domestic economic activity and continued implementation of relevant investment-friendly reforms, particularly those supporting the easing of foreign ownership rules in local enterprises.

The forecasted GIR level in 2023 of US$100 billion is in line with the prospects for foreign exchange flows into the major external accounts next year, which essentially reflect continued elevated external risks tempered by domestic economic resilience.

Looking further ahead, while there is scope for global economic conditions to improve next year, particularly with regard to commodity price conditions, the downside risks to external demand amid tighter global financial conditions also highlight the importance of building up domestic sources of resilience to cushion the domestic economy from external shocks. Preserving strong macroeconomic fundamentals will be a key factor that will be relied upon to sustain external sector resilience over the near term.

The BSP continues to emphasize limitations to the forecasts, particularly given continued buildup of external challenges. The BSP will continue to monitor closely emerging external sector developments and risks and how these may impact the BSP’s fulfillment of its price and financial stability objectives.