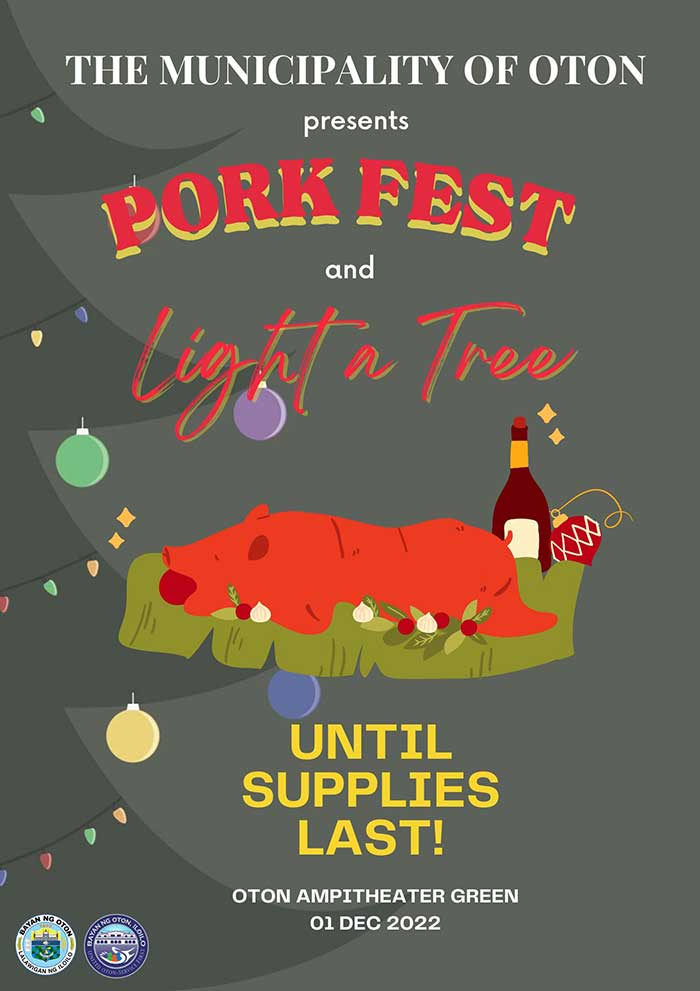 Doing it the un-Santa Barbara way?

Oton, the first municipality to record an African Swine Fever (ASF) case in Iloilo, issued an advisory on Monday relative to its Pork Fest and Light a Tree Program on Dec 1, 2022.

And yes, it would toss away the “reservation method” but instead would adopt the “first come, first served” rule in giving free pork meals.

“Due to the limited supply of pre-packed pork meals and to ensure the safety of everybody during, pork meal tickets shall be distributed on the day of the event,” the Oton Infocen page said.

The tickets shall be distributed at the Oton Plaza and would be used as the basis of the food distribution.

Due to the limited availability of food packs, the distribution shall be on a first-come, first-served basis.

Citing that the event’s main objective is to assure the pork-buying public that pork is now safe for consumption, there will be food kiosks selling lechon and pork barbeque at the back of the Saga Mural.

“We hope that all Oggtonganons and visitors may enjoy a safe celebration of our Light-a-Tree program and porkfest,” the advisory added.

It can be noted that many visitors have censured Santa Barbara town’s 1st Lechon Festival last Sunday after no roasted pig was sold for dine-in and take-out consumers.

Buyers were told that the lechon were already reserved prior to the activity.

Disgusted visitors and buyers turned to social media to express their disgust that the festival was nothing but a display.

A few days before the festival, Facebook page Santa Barbara Ugyon noted that the suggested retail price of lechon will be P290/Kilo and would be made available for dine-in and take-out. It also invited backyard hog raisers to participate.

As advertised by the FB page, the festival would be a competition of “Pagwapa gwapa kag pa “namit namit” nga lechon.” (The prettiest and most delicious roasted pig.)

Several towns are expected to hold their own pork festival as the Iloilo provincial government announced that it has set up measures to spur the recovery of the swine industry.

Governor Arthur Defensor Jr. deemed that the holding of a pork festival in the entire province of Iloilo as the program will be beneficial in the prevention, containment, depopulation and recovery measures against ASF.

On Nov 24, Defensor issued Executive Order No. 545 Series of 2022, which orders the implementation of Festival Kontra ASF.

The program will implement activities towards strengthening the resilience of backyard farmers and boosting the swine industry.

Defensor clarified, though, that the pork festival “is not a pork eating festival” but is a program with a series of activities towards recovery from ASF.

It was deemed that the lechon festival is one of the activities aligned for the purpose.