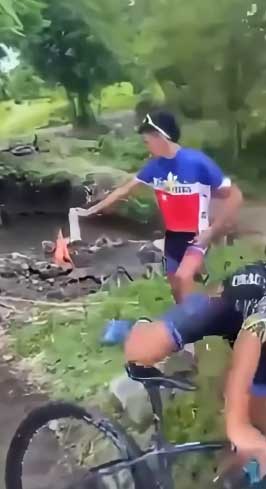 BACOLOD City – The organizers of the 1st Balik Yuhom XC Race on Monday condemned the “malicious act” done by a group of spectators on one of their participants during the race last Sunday.

In a viral post on social media, the culprits were seen fetching water from a stream by the race path and handing it to race participants, one of whom they filmed and made fun at and posted it on Facebook.

Roseller “Jojo” Ramos, a member of the organizing group, Team Armands said that they immediately acted on the incident and got in touch with one of the three culprits as the two other suspects seemed to have deactivated their account. However, they got no response.

“We would like to put it on record that the culprits were not race participants, but spectators who should have been more circumspect in their actions considering that we want everybody, especially those who travelled here for the race, enjoy our MassKara festival,” Ramos said.

Ramos said they were hoping to deal with it privately “because we believe the culprits are minors,” however there were no responses from any of the identified suspects, “and we don’t want that prank to mar the success of the bike run.”

Nevertheless, Ramos said they have apologized to the victim who actually won the race in the LGBTQ category.

“It was supposed to be a big thing for the LGBTQ community because races don’t normally have that kind of category, and we are sorry that this thing has to happen.”

Ramos said the culprits were not members of the biking community in Bacolod.

“They are what we called as the pandemic bikers, meaning they took up biking as a hobby during the pandemic. Members of the biking community here and elsewhere always respect their fellow bikers and this would not have happened if they were real biking enthusiasts.”

Festival Director Atty. Pinky Ocampo also condemned the act and she appealed to Bacolodnons  to “put our best foot forward as we want to make our participants and visitors feel welcome and get the best experience out of this festival.”

Ocampo said we “ought to feel pride that bikers from other parts of the country came to participate in this race,” and “it is unfortunate for them to be victimized by pranksters.”

Ramos said they are just glad that “we continue to enjoy the support of the biking community because they know what actually happened. We hope this incident won’t be repeated again.”

The race brought in bikers from as far as Cebu, Iloilo, Guimaras, Antique and Negros Oriental. (Bacolod Yuhum Foundation Inc.)