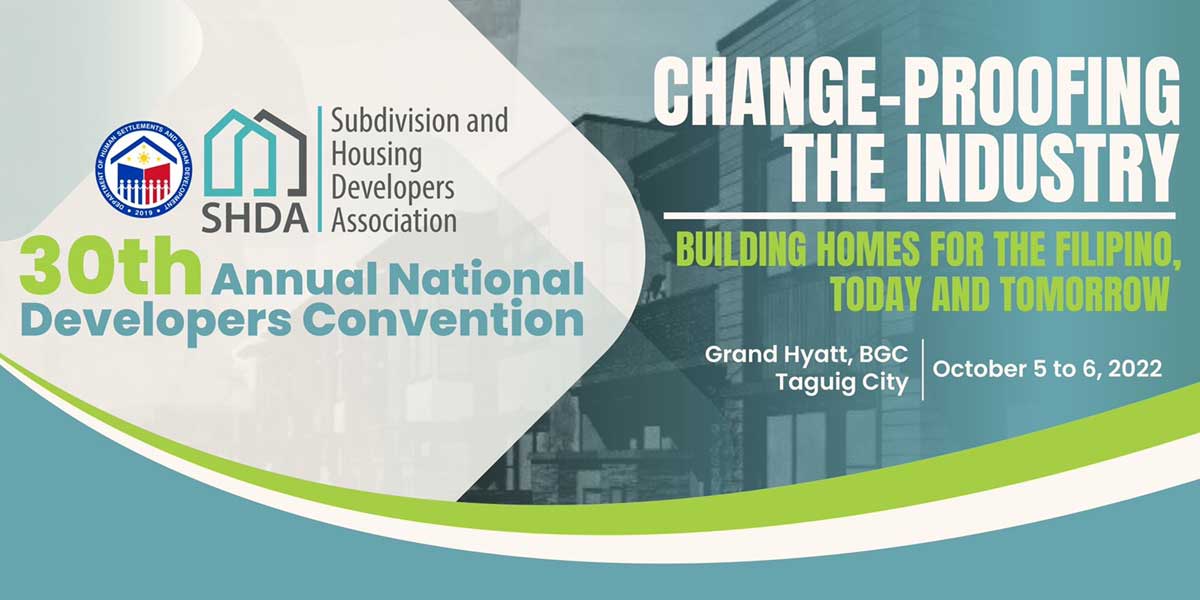 The Subdivision and Housing Developers Association Inc. (SHDA), in partnership with the Department of Human Settlements and Urban Development (DHSUD), will bring together developers, policymakers, suppliers, and other housing industry stakeholders to discuss macro trends, current issues and solutions in the industry at the National Developers Convention 2022 on October 5 to 6 to be held at the Grand Hyatt Manila, Bonifacio Global City, Taguig City.

With the theme “Change-proofing the Industry: Building Homes for Filipinos, Today and Tomorrow,” the National Developers Convention 2022 aims to tackle the new administration’s priorities for the housing industry as well as the importance of digitalization to resolve the emerging challenges brought by the pandemic and global economic crisis.

“We proudly organize the biggest event for the housing industry, which brings together housing developers, policymakers, and other housing stakeholders. The event will provide an avenue for them to meet and discuss future partnerships that can help us build more affordable housing for Filipinos through policy reforms and dialogues,” SHDA President May Rodriguez said.

President Ferdinand Marcos Jr.’s administration has made the country’s rising housing backlog a priority, and is creating plans involving private developers and financial institutions in a more participative and inclusive approach for faster housing production.

Other top government officials who will grace the two-day event include Housing Secretary Jose Rizalino Acuzar and Socioeconomic Planning Secretary Arsenio M. Balisacan, who will deliver a keynote message and facilitate the Philippine macroeconomic briefing, respectively.

“The housing sector in the country needs aggressive efforts. Therefore, we have to involve every stakeholder that can take part in this advocacy of the new administration – that is to provide shelter to millions of Filipinos,” Secretary Acuzar stressed.

The convention is expected to gather around 300 housing sector stakeholders, who will hear from speaker experts on how they can respond together to the disruptive changes in the housing sector.

The second day of the convention will highlight regional development and local government units’ processes, innovation for housing through technology, incentives and smart subdivisions, public utilities in housing development, and public housing and subsidies.

Bacolod City Mayor and Chairman of League of Cities of the Philippines Alfredo-Benitez, President and CEO of Meralco Ray Espinosa, Vice President of PrimeWater Infrastructure Corp. Romeo Sabater, General Manager of National Housing Authority Joeben Tai, and President and CEO of PhilGuarantee Alberto Pascual are some of the speakers on the last day.

Last year’s National Developers Convention was held virtually from October 28 to November 5 and recorded 7,000 participants. With the theme “Beyond the Pandemic: The Future of Housing–Redesigning the Housing Industry through Innovation and Green Initiatives,” the 7-day event yielded the concept of the Smart Subdivision, which is now a new category in the Board of Investment’s Special Investment Priorities Plan.