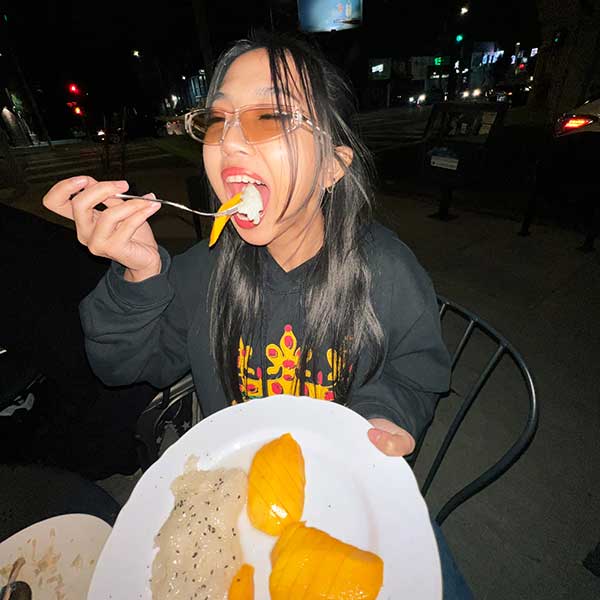 If you were at Coachella 2022, and you happened to catch 88rising’s monumental “Head In The Clouds Forever” set on the main stage on Saturday evening, you undoubtedly saw one of the most incredible moments of the festival:  the Thai rapper/singer MILLI, flanked by half a dozen male dancers on either side of her, spitting fiery barbs of a song called “Mango Sticky Rice” while eating spoonfuls of the iconic dish between verses.  The moment was punctuated by MILLI being the first Thai solo artist to ever play at the festival.

That performance was so next level, it set off a global chain reaction for the popular Thai dessert, which literally went viral, raising sales of the dish across multiple countries following her performance.  As reported by CNN, NBC News, NME, The Guardian, The Independent, The Nation Thailand, South China Morning Post, and many more, MILLI’s Coachella moment raised the sweet Thai dessert’s stature to a fever pitch.  A mere two days later, the Thai Prime Minister lobbied UNESCO to make mango sticky rice a national dish for Thailand.   And it was MILLI’s track that started it all.

“Mango Sticky Rice” is finally being released onto DSP’s today – and it’s everything music lovers (and fans of generally delicious food) could hope for and more.

“Mango Sticky Rice” is more than just a sweet confection for the ears – like many of the 19 year old’s songs, “Mango Sticky Rice” challenges stereotypes- it’s potent, and punk as hell.  The song is a minute and a half of pure fire, bursting at the seams with video game-esque keyboard chaos and MILLI’s incendiary verses.  For audiences outside of Thailand, “Mango Sticky Rice” is an amazing introduction to an artist well on her way to making an international name for herself.