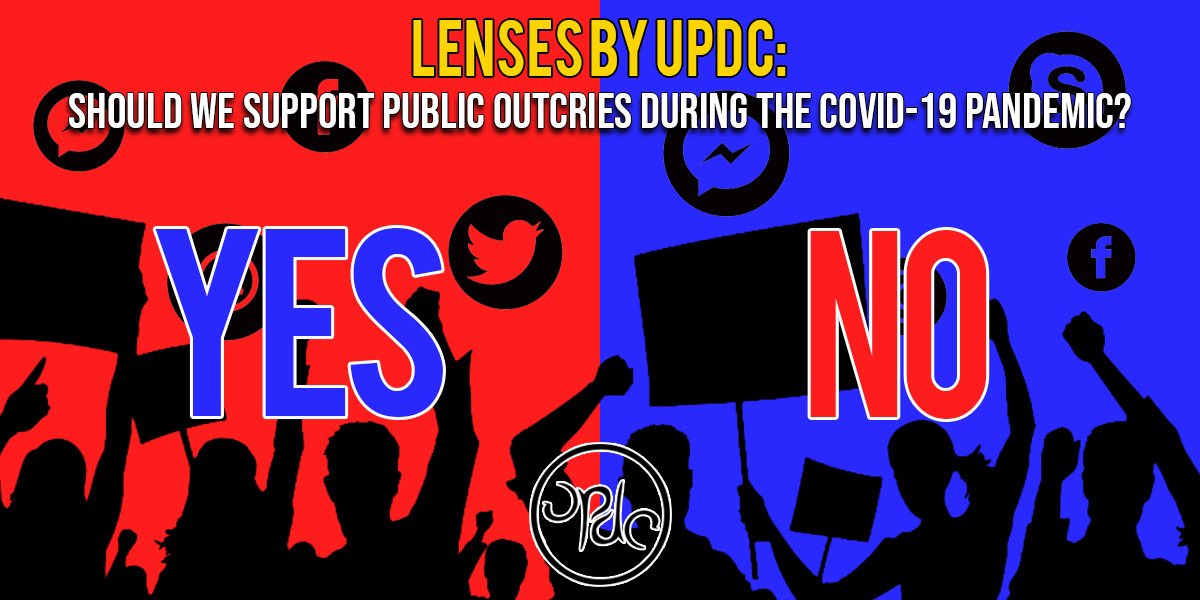 It is true that the threat of COVID-19 has highlighted some governmental intervention that rose to the occasion, but also exposed its loopholes of which are corruption, politicking, incompetence, and abuses. While infections already reached a million worldwide and still rising, the pandemic has magnified countrywide dilemmas in the Philippines which the Duterte Administration is struggling to manage. Hence, the status quo has provoked not just progressive groups but also ordinary citizens to seek for government accountability through online protests. While some say it is better to cooperate and contribute, social justice warriors are steadfast on their criticisms amid COVID-19. Knowing both, should we support public outcries during a national health crisis? Or does it only do more harm than good?

Public outcries drag the attention of the government to monitor the reactions of its constituents about its governance. In a democratic country, the government is pressured to do what the public wants because their power emanates from the people. As they say, there is strength in numbers. These outcries become corrective once the collective voices of the people unite to express their sentiments. Hashtags and online petitions are done by concerned citizens to at least seek for necessary governmental intervention for the welfare of the people.

In the case of COVID-19, netizens use the #MassTestingNow as an online petition calling for the national government to act urgently in addressing the outbreak through mass testing nationwide. For them, flattening the epidemiological curve entails early detection for quick viral containment as advised by the World Health Organization (WHO). The appeal on Change.org was signed by Filipinos nationwide also sought for local testing centres in every local government unit. Even if the national government, through the Department of Health (DOH) was hesitant at first to implement mass testing, Duterte eventually announced that the government should conduct it. Iloilo City Government, moreover, is continually piloting its large-scale local testing with the help of its private donors. The #EndSemesterNow additionally prompted some universities to cut-short its academic year for the safety of its students.

These protests promote discourse among ordinary people. These campaigns serve as avenues for every Filipino to speak up their sentiments whenever something is wrong regardless of their social status. It becomes a platform for every Juan to call for government accountability on a particular societal dilemma. It encourages them to bring up issues that should have been addressed by the national government. Furthermore, these will also raise awareness about the socio-political status quo of a particular country. These online discussions will boost citizen involvement as well as it will gather support from influential people such as celebrities, activists, and professionals nationwide.

While online protests are purposefully conducted to call for government accountability and raise awareness for social issues, this sometimes leads to unfavorable scenarios such as spreading fake news and cultivating cyber harassments. The prevalence of fake news in the Philippines not only covers untrusted information but also fosters fear among ordinary people. During this challenging time, misinformation about the statistic of COVID-19 easily fools the people. People have this notion that something terrible has happened or is still happening whenever there are public outcries. It fuels the paranoia of the people causing them to act irrationally such as outraging and panic-buying.

Moreover, there was a case when government officials forced a student journalist from the University of the East (UE) publication after criticizing the Duterte administration. The authorities summoned Joshua Molo following a complaint by three teachers who got agitated by his post. He was told to issue a public apology and sign a waiver of not posting sentiments about the government again. Molo’s situation is a manifestation that even if public outcries promote discourse advocating for social justice, there are times when others misinterpret it as sedition and rebellion, especially here in the Philippines.

Outcries might spark discussion, but sometimes it only does more harm because of partisan politics and flame wars caused by trolls and keyboard warriors. This idea is not the only solution for a crisis like COVID-19 because misinformation skews reality therefore causing hysteria that results to nuisance and unnecessary commotion. It does not help in flattening the curve because it stirs up hate among other Filipinos instead of participating in an online intellectual discussion for the betterment of the country. This case defeats the purpose of public outcries to seek for social justice because it toxifies citizen interaction by adding fuel to cyberwars and social media drama. Just weeks ago, Twitter deleted millions of accounts that were created recently because of rising numbers of social media trolls involved in partisan politics. Reports say that some accounts are paid to cyber-harass advocates campaigning for a cause.