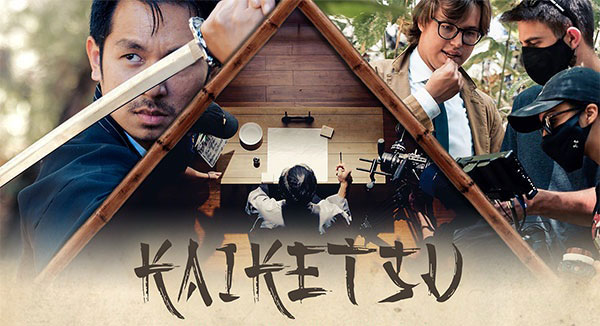 “Life is suffering…”, the master utters as he meditates grimly in his Samurai den.

With an east-meets-west vibe, Kaiketsu captures the audience’s imagination of that time period back in ancient Japan. A contemporary interpretation of history with amazing camera angles, a terrific score, and clever writing.

The story depicts a period where the samurai are becoming few whilst Japan, under the shadow of Western civilisation,  undergoes a transition from feudalism to a modern era under the reign of Emperor “Meui the Great.” But there are a few who adhere to the samurai tradition.

This epic story of retribution, which Joesph Kusic directed and co-wrote with Ryan Thie, is expertly choreographed and well-cast. The short film is beautifully thought out and put together, from the dialogue to the costume design.

Anthony Sayo, ‘the Master’, teaches the principles of perseverance and devotion to Phinehas Yoon, ‘the apprentice’. However, the Master gets into a deadly fight when his apprentice is shot as they cross paths with ‘the cowboy’, played by Dan Pousson, and his men.

The apprentice, now Samurai, witnessed the savagery and hatred that motivated the cowboy. Upon his return to America, he is faced with the right opportunity to exact revenge for his Master. The Samurai and the cowboy meet for one last, epic combat on a ridge. Even towards the end, the Samurai shows what his Master explicitly taught, mercy.

DG sat down with Joseph Kusic, Director and Writer of Kaiketsu and Anthony Sayo, Filipino actor who played the Master.

Joseph, what inspired you to write and direct Kaiketsu? “It all began with a cinematic still of a gun in the desert by itself,” Kusic said. “Then I saw a lone Samurai strolling, but I had no idea who he was or how the narrative would develop. Then my close friend Ryan Thie, who later joined me in writing Kaiketsu, introduced the notion of a Samurai vs a Cowboy face off. The characters of Kaiketsu were born and the plot started to unravel.”

Would you mind sharing the main difficulty you encountered while making this film? “It’s funny to think back on how tough it was to make the movie today, but at the time it seemed like an insurmountable task made more difficult by the fact that I had never before created something of that magnitude. You can plan for things to go extremely well or very poorly, but in the end, you just need to keep in mind that getting through the day is your top priority.”

How crucial was it to cast the right actors for the parts? “Casting is an important step since you require actors with specific qualities,” Kusic explains. “For example, the script for the film’s villain defines him as having piercing blue eyes; nevertheless, the actor we chose for the part had the most stunning and compelling eyes, which was crucial to capturing the audience. In the end, it ultimately boils down to who is best fit for the character and their role.”

“The actors always brought their “A” game to the set,” Kusic continues. “They were all wonderful performers to work with, and I would work with them all again in a heartbeat. Each frame is intended to resemble a painting. I prefer silent situations when the actor’s performance is valued in conjunction with solid choreography and a compelling narrative. The tale should then flow organically from the viewpoint of the spectator so that each element used may be appreciated. My expectations were absolutely exceeded by the actors of Kaiketsu in their ability to convey this.”

Would you consider making a sequel, prequel or even a ‘Master’ spin-off? “Oh my goodness, um, I mean, never say never,” says Kusic. “Like I said earlier, what inspired me to make the movie was an idea. So, all I’ll say is this, there is an idea. I won’t say what it is, but, there’s an idea forming in the world of Kaiketsu.”

Do you have a message to convey to your audience? “We never know when life will present us with challenges, but when it happens, it’s imperative to remember the knowledge of our ancestors. Only when we are able to recollect the lesson that was previously imparted to us can we properly inform the present. And this is the key message I want viewers to take away from the film.”

Anthony, how did you feel when you got cast for Kaiketsu? “I’ve always wanted to play a samurai or action hero in a movie,” says Sayo. “The genre that inspired me to pursue acting was action-drama, so, sure, I was very happy begin and join the cast of Kaiketsu. This endeavor allowed me to realize my goal and dream.”

Was it difficult to immerse yourself into the role? “This genre helped shape my intellect, heart, and passion as a performer. So, no, I had no trouble playing the part,” Sayo responds.

Kaiketsu has been selected as an Official Selection at the Green Jack International Film Festival on September 9-11 at Big Bear, California.