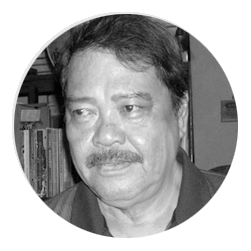 This column on the 2020 American presidential election is dedicated to those with relatives in the United States, avid students of politics, those interested in Phil-Am relations, economics, history, and comparative elections.

Under the inauguration theme “America United,” 46th US President Joe Biden and 49th US Vice President Kamala Harris will take their Oath of Office at noon tomorrow.

“The President’s Own” US Marine Band will play as delegates from around the world arrive at the inauguration platform. The platform is constructed at the west front of the Capitol Building (aka US Congress), at the very same spot where Trump’s hooligans and thugs stormed the building on January 13 (see photo) 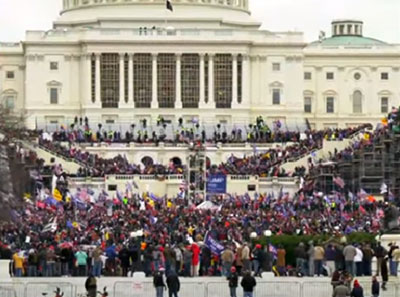 Father Leo O’Donovam, S.J. former president of Georgetown University and a close friend of Biden will give the Invocation.

After being sworn to office, President Biden will deliver his Inaugural Address. Here he will announce a flurry of executive orders to mark the new beginning of his administration and to reverse a number of non-sensical policies of Trump.

As examples, Biden will reverse the travel ban particularly of Muslims, rejoin the Paris Climate Accord, rejoin the World Health Organization, require the use of face mask on federal property, halt evictions of non-immigrants and American-born children of immigrants, extend suspension of student loan payments, handling of the pandemic based on “bedrock science,” and economic recovery.

22-year old Amanda Gorman will do poetry reading. (Note: At the personal request of then incoming President John F. Kenney, 86-year old poet Robert Frost wrote, read and recited from memory a second poem he wrote for the Inauguration. He stopped reading because the glaring sunlight was too bright for his old pair of eyes.)

In the evening, Tom Hanks will host a 90-minute primetime TV special celebrating the Inauguration.

Overall, however, the cold, wintry occasion and atmosphere is surreal. The swearing-in is before an empty national mall (for safety and security), no packed crowds, no big parades, no participation from Trump, and no fancy balls. In fact, the nation’s capital is on the lockdown with 25,000 national guards deployed all around the capitol.

According to the National Park Service that will close the mall, demos will be limited in number and participants will be screened prior to entry and escorted to their permitted location, in addition to other safety related requirements. “Only those holding permits will be allowed within the closed area,” the statement from the park service said.

Both the new President and his Vice will participate in the Pass in Review, a military parade on the East Front of the US Capitol.

Both will then journey to Arlington National Cemetery flanked by former presidents Bill Clinton, George W. Bush, and Barack Obama and their spouses for a wreath-laying ceremony at the Tomb of the Unknown Soldier.

Biden and Harris will then proceed to the White House escorted by a US military parade. The public can watch a “Virtual Parade Across America” organized by the Biden Inauguration Committee.

Elections are fought on the platform of the political parties, their track record, and their presidential candidate.

The Democratic Party (of Joe Biden) Platform Committee had its 90-page platform ready as early as July 27, 2020. It covered practically the entire spectrum of American life and its foreign relations. Examples include: Protecting Americans and recovering from the COVID-19 pandemic, building a stronger, fairer economy, such as raising the minimum daily wage from $5 + cents to $15 per hour of work; achieving universal, affordable, quality health care; healing the soul of America; combating climate crisis; and advancing American interests in trade and economics.

On the other hand, the Republicans (Grand Ol’ Party) have decided not to publish a party platform for 2020 and instead left it to Trump. Examples: Trump cut the tax rates for the rich (including him) such that the non-rich taxes had gone up, not down. COVID-19 is not dangerous and will soon just die down. That’s why his followers don’t wear masks and practice physical distancing. The result? As of January 18 (11:22 pm), COVID-19 cases in the US has reached an alarming 24 million or more than 25% of the world’s 95 million cases. US deaths from the virus was 20% of global deaths of 2 million.

US Past Presidents since 1953

Contesting the presidency of Trump is Biden. Biden was a senator from Delaware for 36 years and was the US Vice President under President Obama’s two terms, or from 2009-2017. A lawyer, he is reputed to work well with senators at both sides of the “aisles” of the US Senate floor.

Trump, in contrast was, with the financial help of his father, Fred, grew their real estate business which panned out to related businesses. Trump is what we Filipinos call a “political butterfly.” In 1987 he registered as a Republican then flew to the Reform Party in 1999, the Democratic Party in 2001, and then landed in 2009 as a Republican.

He has never been elected to any public office before becoming president in 2017. He ran for president unsuccessfully in 2006 and lost his reelection to Joe Biden this year.

Why Trump Lost to Biden

Trump underestimated COVID-19 and insisted it will just go away, an attitude that caused his country the number 1 victim of the pandemic and with it, the economic recession that ensued. Another outcome is Trump’s acceptance rating dipped midyear 2020 to 38 percent.

Meanwhile, Biden approached the pandemic based on “bedrock science” and detailed to voters how he planned to combat the virus, including health care and economic recovery proposals.

Biden: “I am not Trump” was a differentiating slogan that scored well for Biden.

A CNN senior political commentator David Axelrod said Trump’s antics during his presidency inspired a massive coalition of Americans who are “determined to end his stormy, divisive rule.” On Joe Biden, Axelrod wrote: “Joe Biden pitched himself from the start as the antidote to Trump’s hard-edged politics – a healer, not a divider.”

Biden timed the use of his campaign funds well. While Trump splurged from the start, Biden held his purse and let it burst at the last moments on ads that drowned the negative ads Trump threw at him and at the Democrats.

Even before the campaign started, Trump knew he will lose to Biden. So he implanted on the American mind that he will win by a landslide but lose because of fraud and cheating. Some friends observed Donald must have a Filipino election staff who told him that in the Philippines, the dead voted, those alive flew to other precincts to vote again and again, bought votes, and never lost elections: they were just cheated!

He also mobilized several groups of thugs and hoods who believed in his “Make America Great Again,” which Donald described as “our movement.” He also had the Brown Shirts, similar to Adolf Hitler’s storm troopers (Sturm Abeilung) who strong-armed Hitler’s real and perceived detractors. There is also the “Stop the Steal” gang named after Trump’s battle cry of stopping the steal of people’s votes by the Democrats. The “Boogaloo” is a pro-Trump but anti-government white supremacist group and is out to make war against Biden and his fellow democrats.

All these groups were the ones who swarmed the Capitol on January 13, the day Congress was in the process of certifying the electoral votes state by state.

On the same day, Congress impeached Donald Trump by a vote of 232 Yea, 197 Nays, and 4 No Votes. There are two vacant seats in the Senate, which were eventually won by two Democrats in a run-off election.

It is bruited about that the two Democrats did not win; instead the Republicans lost due to the wrangling and insanity of their President.

‘If you get caught between the moon and New York City’