Inflation rate in Guimaras Province subsided to 8.5 percent in August 2022 after five months of acceleration, starting at 4.9 percent in March to 8.7 percent in July

“The data also showed that the 8.5 inflation rate in August 2022 is higher by 5.1 percentage points than the 3.4 percent in August 2021,” Provincial Statistics Officer Nelida B. Losare said.

Based on the CPI movements, the average inflation for January to August in the year 2022 stood at 6.4 percent, higher than the 6.1 percent average last month, Losare added

The slower inflation in August 2022 was mainly due to the descending prices of some heavily weighted commodities (Housing, Water, Electricity, Gas, and other Fuels, 2.3 percent; Transport, 12.8 percent; and Health, 3.2 percent).

“The 2.3 percent inflation in the Housing, Water, Electricity, Gas and other Fuels, was mainly propelled by the Electricity from all sources (coal, solar, hydro, etc.) at 3.3 percent and Liquefied hydrocarbons (butane, propane, etc.) delivered in storage containers at 11.4 percent,” Losare said.

Losare also expounded that the inflation rate of the Transport Commodity group descended to 12.8 percent in August 2022, down by 2.3 percentage points from the 15.1 percent in July 2022, due to the price decrement in Gasoline (ND) with 38.2 percent, Diesel (ND) with 78.5 percent, and Batteries with 1.8 percent.

The slow prices of Private inpatient curative and rehabilitative services with 2.4 percent; Vitamins and minerals at 5.0 percent; and Medicines, branded and generic products, to treat illnesses, diseases, and injuries at 0.8 percent contributed to the decrease of Health Commodity,” Losare added

Losare also emphasized that other commodities with downtrend inflation were Recreation, Sport, and Culture (17.3%); and Clothing and Footwear (3.0%), each shared 1.7 and 1.0 percent, respectively to the August 2022 inflation trend.

“Recreation, Sport, and Culture also slowed due to the decreasing price of other stationery and drawing materials at 37.8 percent, likewise, the 3.0 percent price dropped in Clothing and Footwear, was mainly driven by the sluggish prices of Garments for women or girls, Garments for men or boys, and Garments for infants (0 to under 2 years), which contributed a 0.5, 3.4, and 1.2 percent, respectively to the August 2022 Inflation,” Losare said. 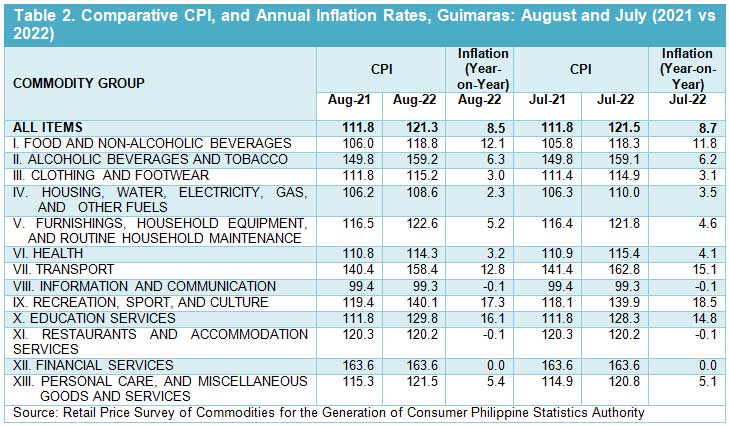 “In August 2022, there were five commodity items that managed to increase their inflation rates in comparison to the previous month: Food and Non-Alcoholic Beverages from 11.8% to 12.1%; Alcoholic Beverages and Tobacco from 6.2% to 6.3%; Furnishing, Household Equipment and Routine Household Maintenance from 4.6% to 5.2%; Education Services from 14.8% to 16.1%; and Personal Care, and Miscellaneous Goods and Services from 5.1% to 5.4%.” Losare explicated.

Losare further explained that only the Commodity groups of Information and Communication, Restaurants and Accommodation Services, and Financial Services maintained their previous month’s inflation at -0.1, -0.1, and 0.0 percent, respectively.

The data showed that the 8.5 inflation rate in August 2022 was also considered the second fastest year-on-year rate recorded since 2019. (See table 3.)

“The inflation rate in August 2022 implied that average price level of consumer goods and services increased to 8.5 percent from a low of 2.6 percent in August 2021”, Losare stated.

“A CPI of 121.3 means that an average Guimarasnon household needs 21.3 pesos more in August 2022 to buy a basket of goods worth 100 pesos in 2018, and the CPI is used to compute the inflation rate for a given period,” Losare simplified.

Meanwhile, Losare cited that the average Purchasing Power of the Peso (PPP) in August 2022 is at 0.82, which is lower when compared to the previous year’s 0.89, illustrating that the purchasing power of the peso depreciated, thereby interpreting that the one peso in 2018, is now valued at 0.82 centavos. 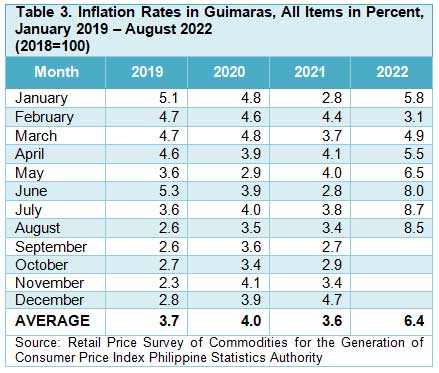