The University of the Philippines (UP), which includes the UP Philippine General Hospital (UP-PGH), is facing a potential budget cut of P22.295 billion, or nearly half of its proposed budget for the Fiscal Year (FY) 2023.

The national government allotted a total budget of P21.854B instead of the P44.149B the University originally proposed. The total of P21.854B is net of the Retirement and Life Insurance Premium (RLIP) in the amount of P1.253B.

Most of the reductions in the UP budget were made in the allotment for capital outlay (CO) and equipment outlay (EO), impacting many of the University’s infrastructure projects for the next year.

Under the National Expenditure Program (NEP) 2023 submitted by the Department of Budget and Management (DBM) on August 22 to Congress, UP is provided a total budget that is a little less than half of what it needs, broken down as follows:

Under UP’s proposed budget, the UP-PGH would account for P1.959B out of P44.149B. Moreover, a big part of the budget UP requested under PS includes requests for additional items for faculty, REPS (research, extension, and professional staff) and administrative positions, retirement gratuity and terminal leave benefits, lump-sum for casual/contractual honoraria and allowances, and provisions under the Magna Carta for Public Health Workers. Under the proposed MOOE would fall funds to cover janitorial, security, and utility expenses, as well as for maintenance of the new buildings.

As presented by the UP Office of the Vice President for Planning and Finance (OVPPF), a comparison of UP’s budget proposal with the provision for the University in the NEP 2023 shows that a budget requirement of P22.296B, or 51% of what UP proposed, was not provided in the NEP. The breakdown of this comparative analysis by expense class is as follows: 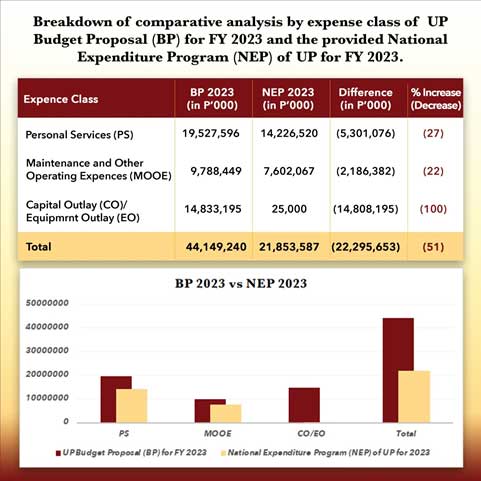 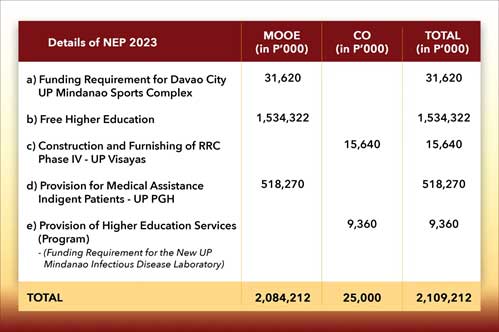 According to DBM Secretary Amenah Pangandaman, the President’s Proposed Budget for the Fiscal Year 2023 is “a proactive budget felt by the people with education, infrastructure, health, agriculture, and social safety nets as priorities.”

During the DBM’s presentation of the proposed NEP 2023 to Congress, Cagayan de Oro Rep. Rufus Rodriguez urged the President and DBM to restore the P3.3B cut from UP’s proposed budget. UP-PGH would lose P893M. DBM Undersecretary Goddes Hope Libiran responded in a press statement, however, that in reviewing and evaluating UP’s proposed budget, the DBM considered the University’s “absorptive capacity, which is 66 percent as of end-2021.”

Absorptive capacity is the ability of agencies to utilize resources made available to them. It must be noted that the budget utilization rate of UP for 2021 is 84%, higher than the “absorptive capacity” reported by DBM.

Libran also said that UP’s budget in the 2022 GAA included infrastructure projects and the purchase of hospital equipment, which were non-recurring expenditures. She assured the public that the education sector would still have one of the highest budgetary allocations under this administration as mandated by the Constitution. (https://up.edu.ph)