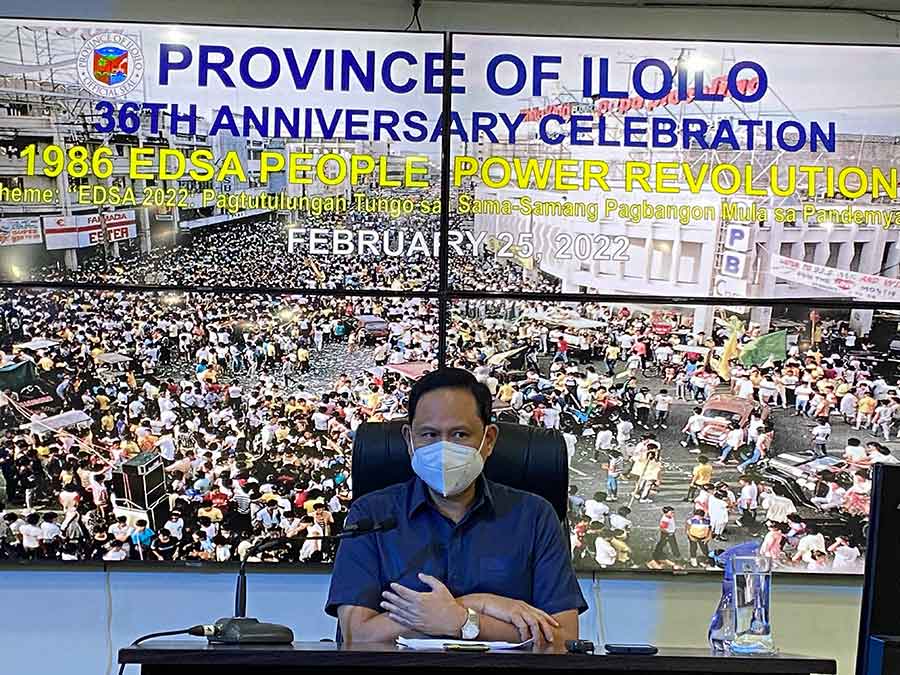 The Iloilo provincial government will spearhead a “Freedom Rally” on Feb 25, 2022 to commemorate the 36th anniversary of the 1986 EDSA People Power revolution.

Iloilo Governor Arthur Defensor Jr. issued Executive Order No. 136 on Monday, Feb. 21, which sanctioned the rally as well as other related activities.

The provincial government, as well as government offices, establishments, sectors, and households in Iloilo province are enjoined to display Philippine flags until the 25th.

The Freedom Rally, which will start at 8 p.m., includes three activities – a Freedom Countdown, a People Power Noise Barrage, and the People Power Caravan.

The Freedom Countdown will be the first part of the program, which will end at 9:25 p.m., the time when the family of the late dictator Ferdinand Marcos left the Philippines for Hawaii on the same date in 1986.

The end of the countdown will signify the start of the People Power Noise Barrage, where all government agencies, establishments, sectors and households, as well as churches, are enjoined to participate; and the People Power Caravan, wherein vehicles participating in the Freedom Rally will be dispersed and hold a motorcade to different points in the city and province of Iloilo.

The provincial government will ensure the observance of minimum public health standards in relation to the current coronavirus disease 2019 (COVID-19) pandemic.

In a press conference, Defensor said the EO was based on Memorandum Circular No. 2022-012 issued by the Department of the Interior and Local Government (DILG).

The DILG memo encouraged the commemoration of the EDSA People Power revolution, which is to be spearheaded by the National Historical Commission of the Philippines (NHCP).

The governor also stated that his aim was to “refresh the people’s memories” on what really happened in February 1986.

He also clarified that the commemoration would be “devoid of political color,” denying insinuations that this was in response to the 2022 election campaign stop of the late dictator’s son and presidential candidate Ferdinand Marcos Jr. on Feb 24.

“It is an event to preserve the legacy of People Power as an ultimate assertion of the will of the people that charted the course of the country’s history and restored democratic institutions. This event does not mention the campaign of [former senator Marcos Jr.]. This is on the EDSA People Power revolution anniversary. This will happen on the 25th,” he explained.

Likewise, he did not confirm whether Marcos Jr.’s election rival Vice President Leni Robredo, who will be in Iloilo on the 25th, will be attending the Freedom Rally.