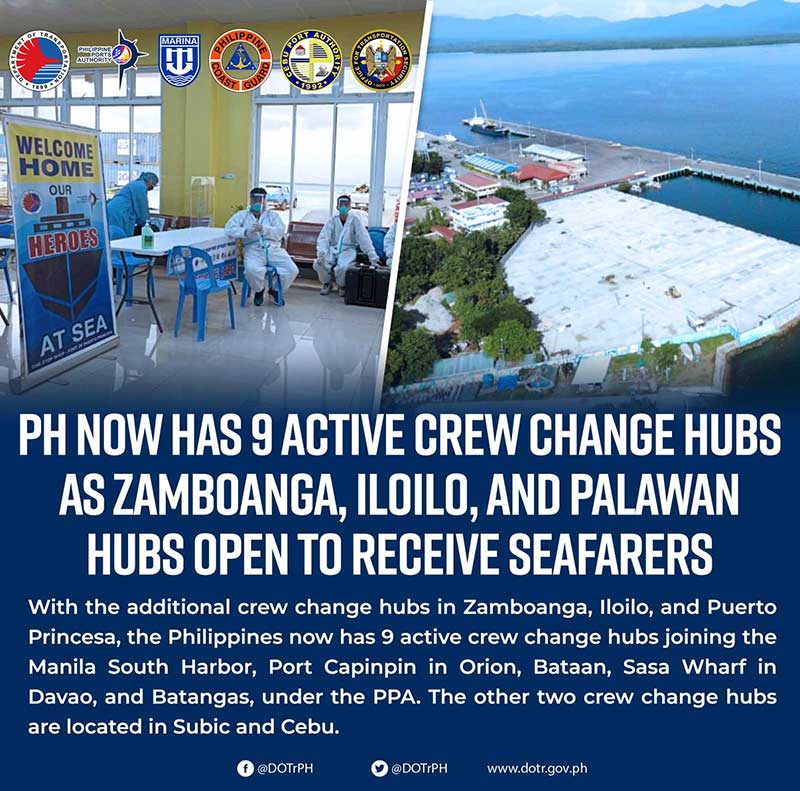 Iloilo now hosts one of the nine ship crew change hubs for seafarers in the Philippines.

The change hubs were established pursuant to the order of Department of Transportation (DOTr) Secretary Art Tugade.

Apart from Iloilo, the two newest hubs were activated in the ports of Zamboanga City and in Puerto Princesa, Palawan.

The DOTr Maritime Sector led the opening of the new crew change hubs, composed of the Philippine Ports Authority (PPA), the Office of Transportation Security (OTS), and the Maritime Industry Authority (MARINA), together with other concerned government agencies.

With the additional crew change hubs, the Philippines now has nine active hubs, including those in Manila South Harbor, Port Capinpin in Orion, Bataan, Sasa Wharf in Davao, and Batangas, under the PPA.

The other two crew change hubs are in Subic and Cebu.

The country introduced the crew change hubs to process the documents needed to facilitate the movement of both on-signers and off-signers amid the global pandemic, recognizing the vital contribution of seafarers to the country’s economy.

The establishment of crew change hubs across the country is part of the measures adopted to keep maritime operations ongoing despite the strict health protocols being enforced amid the COVID-19 pandemic.

The crew change hubs are staffed by the following government agencies: the DOTr and its attached agencies: Office for Transportation Security, Cebu Port Authority, Philippine Ports Authority, Philippine Coast Guard, Maritime Industry Authority, the Department of Health, Bureau of Quarantine, the Bureau of Customs, Bureau of Immigration, Department of Foreign Affairs, the Overseas Workers Welfare Organization, the Philippine Overseas Employment Administration, the Office of Civil Defense, and by the various provincial and local government units.

Tugade welcomed the activation of the new crew change hubs, stressing that the DOTr Maritime Sector and the other involved government agencies remain firm in their commitment to make crew changes as efficient as possible while upholding the health and safety of seafarers, especially Filipino mariners.

“It takes a whole maritime approach to make crew changes possible in the country. The various government agencies and the stakeholders that are involved remain firm in their strong and active participation to ensure the continuous operation of these crew change hubs, for our maritime industry champions: our Filipino seafarers,” Tugade said in a news release on Monday.