“The decrease was due to the 17.49 percent decrement in the irrigated palay yields comprising 74.00 percent of the provincial total. Likewise, rainfed farms produced only 25,244 metric tons, 15.77 percent less than the 29,970 metric tons of rainfed palay harvested in 2020,” Provincial Statistical Officer Nelida B. Losare said.

Losare also expounded that the comparative palay distribution by ecosystem shows that of the total provincial output, the decrement from rainfed palay farms was 4,726 metric tons in 2020. Irrigated palay also declined by 1,842 MT from 10,532 produced in 2020.

“Palay in Guimaras is mostly planted in the rainfed areas that are dependent on rainwater for their growth and development”, Losare said.

Likewise, Losare elaborated that in terms of area harvested, a total of 2,143 hectares reduction was seen in rainfed and irrigated combined palay farms or 15.73 percent smaller compared to the first three quarters of 2020.

“Of the total area harvested, rainfed palay farms reduced by 1,642 hectares or 15.54 percent while irrigated farms lessened by 501 hectares or 16.38 percent lower than the area harvested in 2020 of the same quarters,” Losare said. 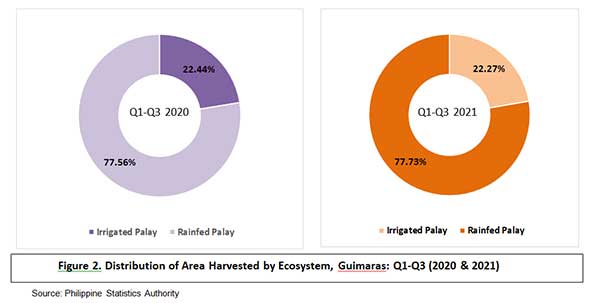 Meanwhile, in terms of percentage distribution, rainfed palay farms shared more than two-thirds or 77.73 percent of the provincial total while 22.27 percent contributed by irrigated palay farms in Q1-Q3 of 2021.

September 27, 2022 0
Western Visayas’s alleged high-value individual and the No. 2 provincial “drug personality” was arrested at Barangay Calitan in Panay, Capiz at about 7:30 p.m....

SHABU HIGHWAY?: P1.020-M worth of ‘shabu’ seized in Bacolod seaport