Inflation rate in Guimaras province escalated to 5.5 percent in April 2022 from 4.9 percent in March 2022, higher than the 4.1 percent inflation in April 2021, based on the Retail Price Survey of Commodities for the Generation of Consumer Price Index of the Philippine Statistics Authority (PSA). 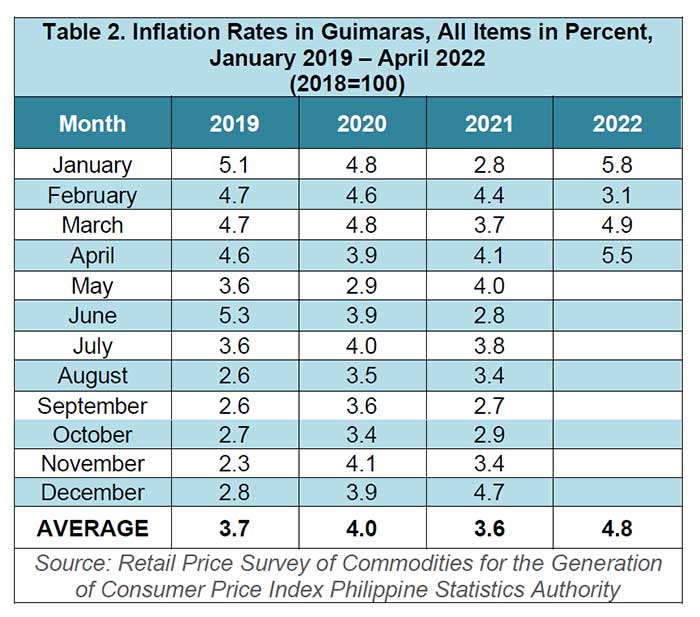 The faster rate of change in the prices of commodity groups in the province was propelled by the higher annual increment in the indices of Transport, 10. 2 percent; Food and Non-Alcoholic Beverages, 5.7 percent; and Housing, Water, Electricity, Gas, and Other Fuels, 4.7 percent.

“Transport commodity is one of the heavily-weighted items with a huge share to the faster price changes in April despite the slight downward inflation trend for the past two months,” Losare said.

Losare elaborated that the 39.4 percent price increment in the Operation of Personal Transport Equipment propelled the 10.2 inflation rate in the Transport Commodity group in April 2022.

“The 5.7 percent inflation on Food and Non-Alcoholic Beverages were pushed upward by the 24.4 percent price increment in Vegetables, Tubers, Cooking Bananas and Pulses; the 13.2 percent inflation in Sugar, Confectionery and Desserts; 12.7 percent in Corn; and the 10.8 increased in the Fruits and Nuts,” Losare said. 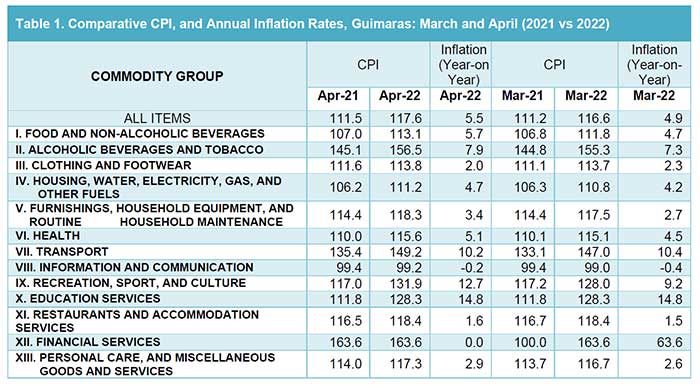 Other contributing factors to the higher April inflation were the higher annual increments in the indices of Personal Care and Miscellaneous Good Services (2.9%); Restaurant and Accommodation Services (1.6%); Alcoholic Beverages and Tobacco (7.9%); Health (5.1%); Furnishing, Household Equipment and Routine Household Maintenance (3.4%); Clothing and footwear (2.0%); and Recreation, Sport and Culture (12.7%).

“In April, only the Information and Communication commodity index slowed to -0.2 percent, a slight improvement compared to its level a month ago recorded at -0.4 percent,” Losare said.

Losare also explained that only Education Services retained its inflation at 14.8 percent with unchanged indices in March and April for 2021 and 2022.

Meanwhile, the steady 163.6 commodity index in the Financial Services in April resulted in an unchanged (0.0%) inflation, lower than the 63.6 percent inflation in March.