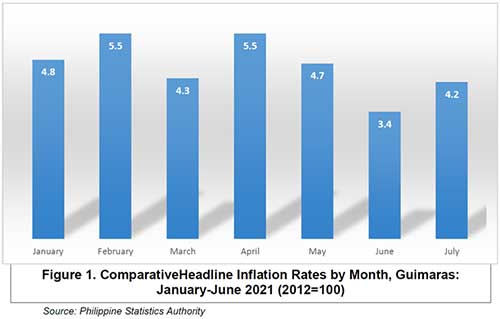 Guimaras’ inflation shot up to 4.2 percent in July 2021, from 3.4 in June 2021, propelled largely by higher food cost, according to the result of the Retail Prices Survey (RPS) conducted by the Philippine Statistics Authority (PSA).

Inflation showed an unpredictable trend from the start of the year until April, before it dropped by 1.3 percentage points for a 3.4 percent inflation in June (See Figure 1).

“The rate of change in the Consumer Price Index rose to 4.2 percent in July 2021, after two months of decreasing trend, moving faster than its previous month’s annual rate of change at 3.4 percent and a bit faster relative to its 3.5 percent rate in July 2020.” Provincial Statistical Officer Nelida B. Losare, said

Losare said price hikes in the annual rate of change in the three commodity groups pushed inflation to escalate in July 2021.

The inflation of alcoholic beverages at 20.4 percent and tobacco at 15.2 percent fueled Alcoholic Beverages and Tobacco to quicken at 16.4 percent, the fastest annual rate of the commodity for the year 2021, notably higher by more than twice its level in January 2021 that was recorded at 6.8 percent.

Higher prices in Catering Services (16.9%) also pushed the inflation of Restaurant and Miscellaneous Goods and Services to 12.1 percent.

Prices of Food and Non-alcoholic Beverages, however, was driven by the food commodity group with 1.76 percent inflation, from a low of 0.5 percent a month ago.

Other commodity groups that contributed to the faster inflation rate for all items in July 2021 were Recreation and Culture that increased by 0.9 percent from -1.9 percent in June 2021 to -1.0 percent in July 2021; Health from 1.5 to 1.9 percent; and Housing, Water, Electricity, Gas and other Fuels from 0.2 to 0.5 percent.

“On Recreation and Culture commodity group, faster price hikes were on Other Recreational Items and Equipment, Gardens and Pets (14.0%) with an increment of 8.5 percentage points from the previous month,” Losare said.

The 1.9 percent change in Health was mainly due to inflation hikes on Medical Products, Appliances, and Equipment (14.0%) which peaked to 2.8 percent.

Losare also said Transport (7.1%) and Clothing and Footwear (2.9%) both posted 0.7 percent decrease each while Education (5.1%); Furnishings, Household Equipment and Routine Maintenance of the House (4.5%); and Communication (0.1) remained constant and showed steady inflation rates from June 2021 to July 2021 at 1.8 percent, from a low of 0.5 percent a month ago. 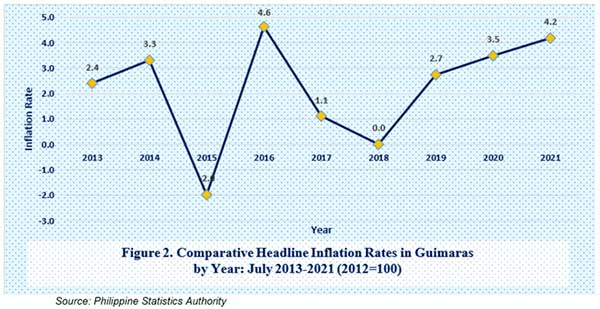 Guimaras’ year-on-year inflation rate went up to 4.2 percent in July 2021, the fastest inflation since 2017.