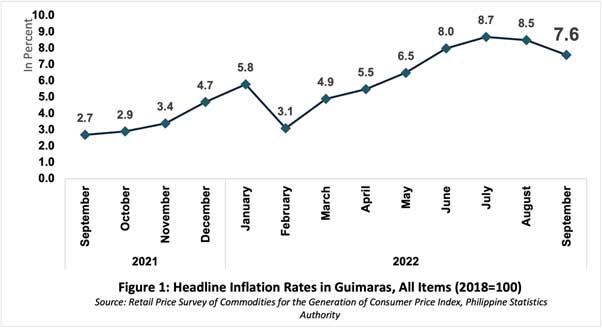 Headline inflation rate in Guimaras Province continually dropped since the second semester of 2022 started, based on the generated data of the Consumer Price Index (CPI) from the Retail Price Survey (RPS) of Commodities conducted by the Philippine Statistics Authority (PSA).

“Starting July, the Inflation of Guimaras showed a slower movement from 8.7 to 8.5 in August and 7.6 percent in September 2022,” Provincial Statistics Officer Nelida B. Losare said.

The slower inflation in September 2022 was mainly due to lower prices of some heavily weighted commodities (Food and Non-Alcoholic Beverages, 9.4 percent; Transport, 12.0 percent; and Education Services, 14.4 percent).

“The 9.4 percent inflation in the Food and Non-Alcoholic Beverages, was mainly propelled by the Rice, 2.0 percent, Vegetables, 24.1 percent, and Meat at 14.2 percent,” Losare said.

Losare also explained that the inflation rate of the Transport Commodity group descended to 12.0 percent in September 2022, down by 0.8 percentage points from the 12.8 percent in August 2022, due to the price decrement in Gasoline (ND) with 33.8 percent, Maintenance and repair of personal transport equipment (S) with 3.7 percent, and Parts for personal transport equipment (SD) with -0.7 percent.

Only the Commodity groups of Clothing and Footwear, Health, Financial Services, and  Personal Care, and Miscellaneous Goods and Services, maintained their previous month’s inflation at 3.0, 3.2, 0.0, and 5.4 percent, respectively. 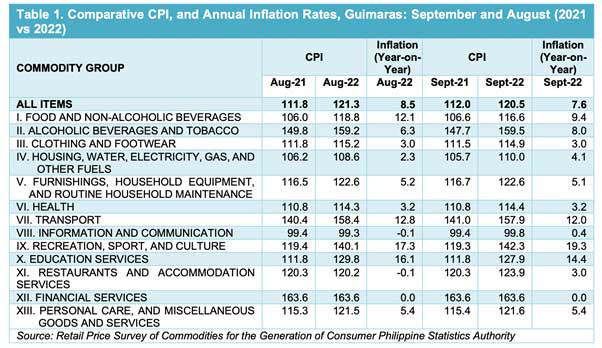 Data also showed that the average inflation for January to September in the year 2022 stood at 6.5 percent, higher than the 6.4 percent average last month,” Losare said. Meanwhile, the average Purchasing Power of the Peso (PPP) in September 2022 is at 0.83, which is lower when compared to the previous year’s 0.89, illustrating that the purchasing power of the peso depreciated, thereby interpreting that the one peso in 2018, is now valued at 0.83 centavos.

“The PPP for September was higher against the 0.82 record in August 2022,” Losare said.