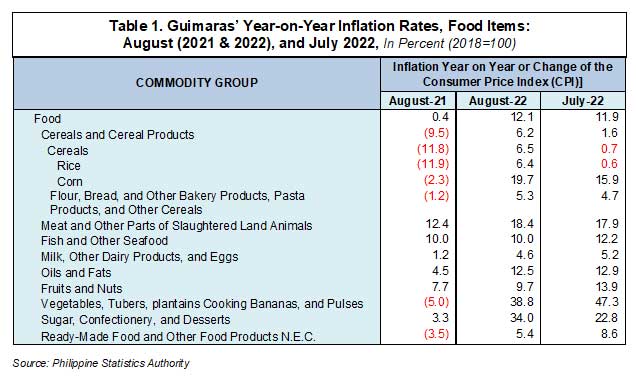 Food commodity inflation in Guimaras surged to 12.1, which is 0.2 percentage points faster than the July 2022 rate at 11.9 percent, based on the Retail Price Survey of Commodities for the Generation of Consumer Price Index of the Philippine Statistics Authority (PSA).

The top three heavily weighted food groups that drove year-on-year price increases in food items were rice (6.4%) with the largest share of 82.6 percent; sugar, confectionery, and desserts; and meat and other parts of slaughtered land animals (18.4%) (34.0%) chipping in 12.1 and 3.0 percent to the August 2022 food inflation, respectively, 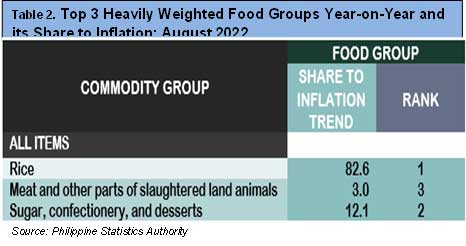 “Other food items that contributed to the food inflation’s shoot up in August 2022 were: Cereals and Cereal Products (6.2%); Flour, Bread and Other Bakery Products, Pasta Products, and other Cereals (5.3%); Corn (19.7%); and Cereals (6.5%),” Provincial Statistics Officer Nelida B. Losare said.

The data also showed that food inflation unceasingly accelerated for 6 months, from 4.4 percent in March to 12.1 in August, the highest year-on-year level so far since August 2021. (See Figure 1)

Food inflation rates for 2021 demonstrated rising rates, starting at 0.4 percent in August and continuously rising until 5.4 percent inflation in December, the highest level of inflation for the year, (See Figure 1) 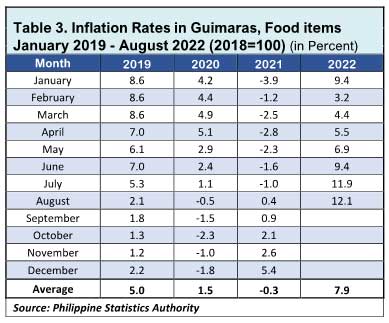 “In 2022, food inflation also showed a continuous uptrend from March to August, after the sudden 3.2 percent drop in February from the fastest rate of 9.4 in January,” Losare said.