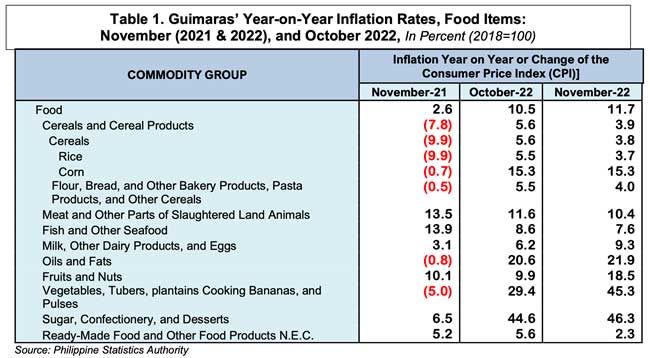 The food inflation in Guimaras spiked to 11.7 percent in November 2022, higher by 1.2 percentage points than the 10.5 percent in October 2022 and 9.1 percent faster than the 2.6 inflation in November 2021, based on the Retail Price Survey of Commodities for the Generation of Consumer Price Index of the Philippine Statistics Authority (PSA).

“Likewise, the 18.5 inflation of Fruits and nuts; and the 9.3 annual price increment of Milk, other dairy products, and eggs cut a 21.4 and 12.6 percent to the October 2022 food inflation, respectively,” Losare added.

Other food items which contributed to the uptrend of the November 2022 food inflation in Guimaras were Sugar, confectionery, and desserts (46.3%); and Oils and fats (21.9%).

“In 2022, food inflation started at a rate of 9.4 percent and suddenly contracted to 3.2 percent in February. From then, the data  showed a continuous uptrend from March  to August with 12.1 percent food inflation  which was the highest rate recorded in 10  months,” Losare said.

The data also showed that food inflation  increased in October 2022 after slowing  down at a 9.2 percent in September and  expanded to 11.7 percent in November 2022. (See figure 1)

“The average food price changes for the first eleven months of the current year stood  at 8.6 percent, the highest average food  inflation since 2019, while the slowest  average food inflation was seen in 2021 at -0.3%,” Losare said. 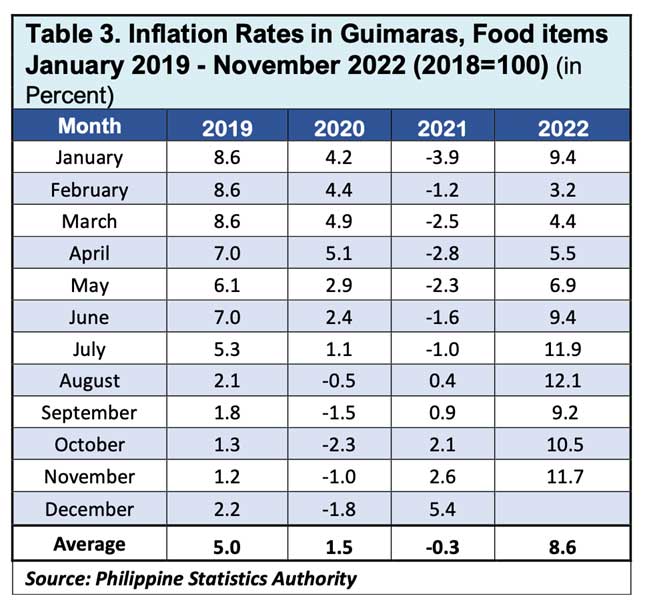