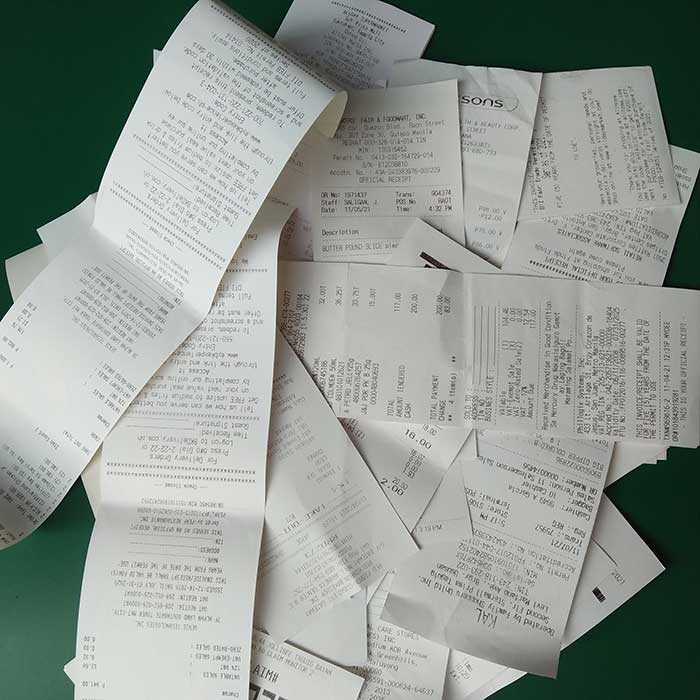 Environmental health and justice groups are urging the authorities to implement measures that will protect the public, particularly cashiers who are mostly women, from being exposed to toxic chemicals lurking in thermal paper receipts.

In a joint letter delivered last July 5 to the Department of Trade and Industry (DTI), EcoWaste Coalition president Eileen Sison and the Interfacing Development Interventions for Sustainability (IDIS) executive director Mark T. Peñalver notified Secretary Alfredo Pascual and Undersecretary Ruth Castelo about the hidden hazards posed by such transaction receipts and the need for governmental interventions.

According to the results of a pioneering study by the groups, endocrine disrupting chemicals (EDCs) such as Bisphenol A (BPA) and its chemical cousin Bisphenol S (BPS) have been detected in thermal paper receipts collected from business and government establishments in the country.  EDCs are non-natural chemicals or mixtures of chemicals that interfere with the way the body’s hormones work, causing adverse health effects.

The said study was undertaken as part of the recently-completed eight-country EDC-Free Asia Project spearheaded by the Wonjin Institute for Occupational and Environmental Health (WIOEH) with support from the Korea Financial Industry Public Interest Foundation (FIPIF).

“Mindful of the adverse effects of EDCs like BPA and BPS on human health and the environment and the need to protect the vulnerable populations, including cashier attendants who are predominantly women, we urge DTI to take the necessary steps,” Peñalver and Sison said.

The EcoWaste Coalition and IDIS specifically suggested to DTI to:

Because of its reprotoxic and endocrine disrupting qualities, the European Union has taken action to limit BPA’s use to protect human health and the environment.  In 2017, BPA was added to the Registration, Evaluation and Authorization of Chemicals (REACH) Candidate List for substances of very high concern (SVHCs) and in 2019 the European Chemicals Agency (ECHA) recommended its inclusion in the REACH Authorization List

From January 2020, thermal paper with 0.02% or more of BPA by weight cannot be placed on the EU market. Switzerland in 2019 also banned the use of both BPA and BPS in thermal paper in concentrations equal to or greater than 0.02% effective June 2020.

In their letter to DTI, the groups expressed concern about the plight of cashiers who touch and handle thermal paper receipts on a daily basis as this may result in high BPA/BPS exposure and cause negative health outcomes, especially for pregnant or nursing women, and women of childbearing age.

To reduce cashiers’ exposure to BPA/BPS in thermal paper receipts, the EcoWaste Coalition and IDIS have recommended the following precautionary measures: