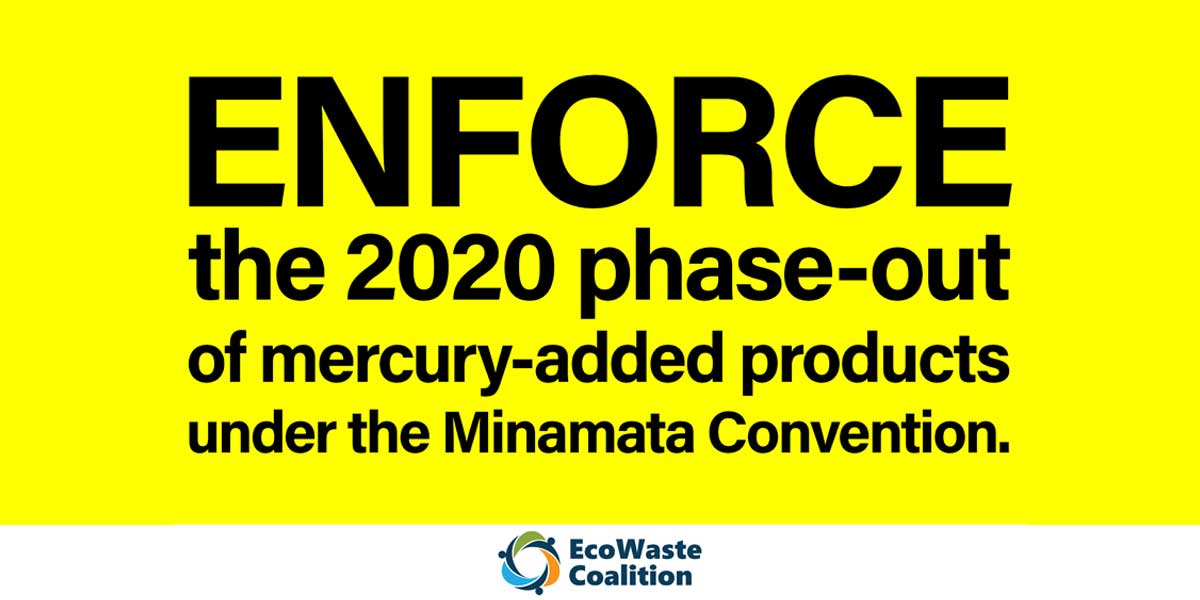 In observance of the World Consumer Rights Day (WCRD) on March 15, a toxics watchdog group urged the authorities to launch a fresh drive to protect consumers from banned mercury-added products (MAPs) that are still sold locally, especially in e-commerce platforms.

WCRD is a yearly commemoration spearheaded by Consumers International to raise global awareness about the rights of consumers to basic needs, healthy environment, safety, information, education, choice, representation and redress, and to demand respect and protection for such basic rights.

“The government needs to mount a multifaceted campaign to stop the entry, distribution and sale of mostly imported MAPs phased out in 2020 under the Minamata Convention on Mercury to reduce health risks and environmental contamination,” said Aileen Lucero, National Coordinator, EcoWaste Coalition.

“Such a campaign involving customs, environmental, health, trade, consumer protection and law enforcement agencies, business associations, civil society groups, and the media will be a shot in the arm for the National Action Plan (NAP) adopted by the government in 2019 to phase out MAPs and manage the associated mercury-containing wastes,” she said.

The Minamata Convention, which entered into force in August 2017, disallowed by 2020 the manufacture, import and export of certain mercury-added products that do not meet agreed criteria.   The second segment of the fourth meeting of the Conference of the Parties (COP4) to the said convention will take place in Bali, Indonesia from March 21 to 25.

Among the phased out mercury-added products that are still widely available in online shopping sites despite the global phase-out deadline are cosmetics like skin lightening creams and mercury-based medical devices such as sphygmomanometers and thermometers.

To add force to the important public health warnings regularly issued by the  Food and Drug Administration (FDA), the EcoWaste Coalition requested the government, with the help of the National Bureau of Investigation (NBI), to pinpoint and charge importers, distributors and retailers of mercury-added cosmetics to dissuade others from engaging in such an illegal trade.

To stop online sales of MAPs, the group also urged e-commerce platforms to form a dedicated team to track, block and deactivate third-party vendors in addition to the existing notification system for reporting sale of prohibited, restricted or controlled products.

Realizing what seems to be a national obsession for white skin, the EcoWaste Coalition reiterated the need for a complementary public information campaign to counter the false marketing of “whiteness” as an aspiration, especially among women and girls, and to amplify the message that beauty is found in all skin tones.

It also appealed to the Department of Environment and Natural Resources (DENR) and the Department of Trade and Industry (DTI) to hasten the drafting of a joint administrative order addressing the online sale of regulated chemicals such as cyanide and mercury.

In separate letters sent to the government in 2020, the EcoWaste Coalition alerted concerned agencies about the use of online shopping platforms to sell not only mercury containing cosmetics and medical devices, but also liquid mercury, leading to ongoing regulatory enforcement and enhancement activities.