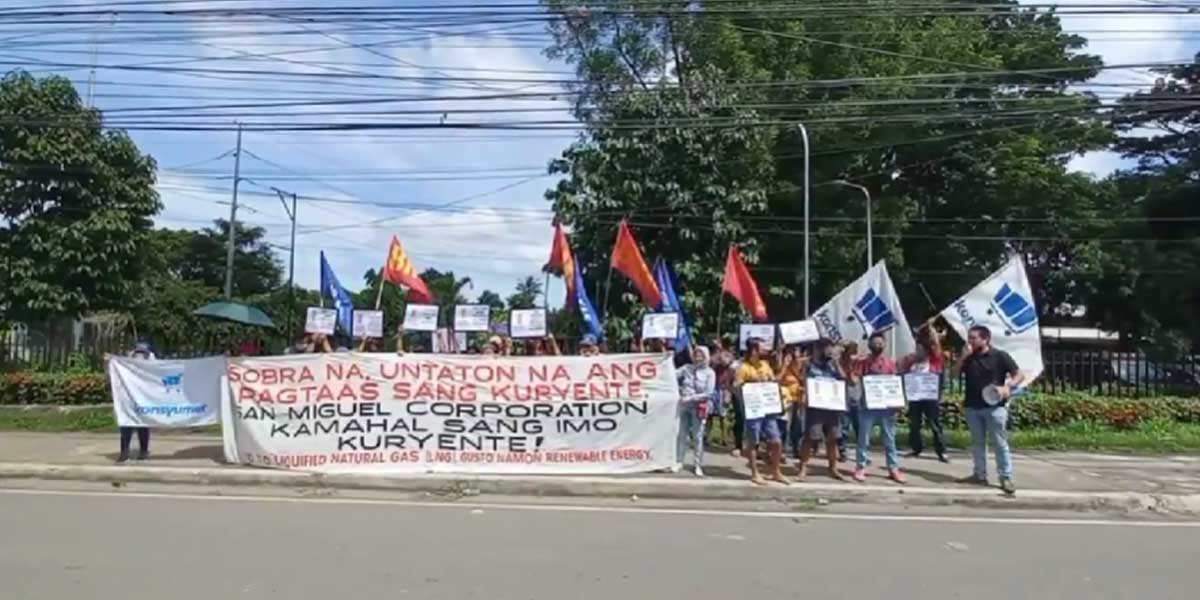 BACOLOD City – Electricity Consumers led by the Power for People Coalition (P4P) on Thursday mobilized to protest the high electricity prices imposed on the island, particularly on San Miguel Corporation’s planned construction of a Liquefied Natural Gas (LNG) power plant in San Carlos City. San Miguel Corporation, through its subsidiary SMC Global Power, is one of the biggest suppliers of electricity in the country.

Member-organizations of P4P, such as Sanlakas, Bukluran ng Manggagawang Pilipino (BMP), Konsyumer Negros, Youth for Climate Hope (Y4CH), and the Center for Energy, Ecology, and Development (CEED), were present at the mobilization at the San Miguel Bottling Plant in Bacolod City.

“This action is meant to demonstrate that Negrosanons are fed up with the machinations of SMC, where we are seen as a limitless source of profit for their energy companies. San Miguel itself says that movements in gas prices have hurt its bottom line. Any normal company would say, maybe we should stop pushing fossil fuels and instead look at alternatives like renewable energy. But for San Miguel, their solution is instead to continue to pass on the burden to its consumers,” said Miggy Yulo, Konsyumer Negros Coordinator.

After the protest, the Electricity Consumers Assembly Against High Prices of Electricity was held, where 30 consumer advocates and representatives of basic sectors issued a declaration against high prices of electricity addressed to CENECO, where generation charges have doubled since last year.

“Recently, electricity consumers in Negros have been plagued by an ever-increasing electricity rate. Last year the per kWh electricity rates from the generation charge only ranges from Php4/kWh to Php7/kWh. Now, it has doubled this August 2022 and peaked at more than Php10/kWh generation charge. What this means if to be estimated is that if a regular household whose monthly consumption is 250 kWh will have to pay more or less Php3,750 this August as compared to the electricity bill a few months ago that is only around Php2,500. The Php1,250 difference is already equivalent to half-sack or 25 kg of rice,” said the declaration.

The advocates also hit CENECO’s emergency power supply agreement with Palm Concepcion Power Corporation, which allowed the latter to pass on fuel costs to consumers, instead of protecting member-consumer-owners (MCOs) with a straight price agreement.

“We are sad to see that electric coops are not working for the interests of their member-consumer-owners, and instead cast its lot with generation companies seeking to profit off the misery of Negrosanons. CENECO must side with its owners, and provide us with least-cost electricity with straight price PSAs instead of the current system which only favors big companies,” said Yulo.