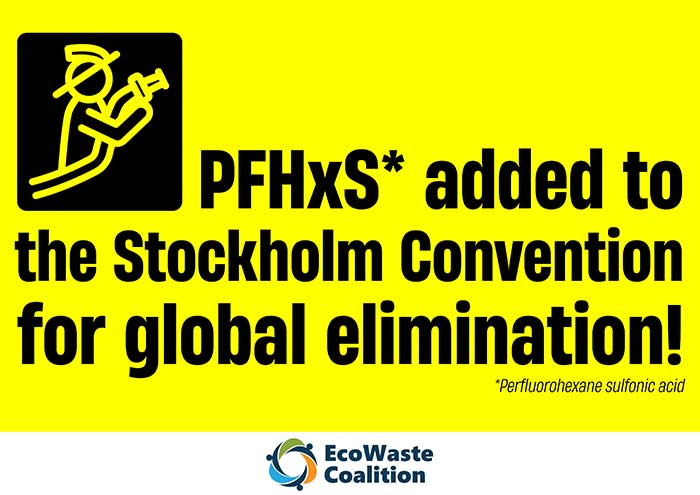 The toxics watchdog group EcoWaste Coalition lauded the decision by the world’s governments to add PFHxS to the Stockholm Convention’s list of banned persistent organic pollutants (POPs) with no exemptions.

PFHxS, or perfluorohexane sulfonic acid, its salts, and related substances, will be added to Annex A of the treaty for global elimination as agreed during the 10th Conference of the Parties (COP10) of the Stockholm Convention in Geneva, Switzerland.

PFHxS belongs to the highly persistent group of per- and polyfluoroalkyl substances (PFAS), or the “forever chemicals.” Related fluorinated chemicals, perfluorooctane sulfonate (PFOS) and perfluorooctanoic acid (PFOA), were added to the Convention in 2009 and 2019.

“We welcome the decision by COP10 to eliminate PFHxS with no exemptions as this will offer firefighters, industrial workers and other impacted groups, including indigenous peoples, the legal protection from this highly toxic pollutant,” said Aileen Lucero, National Coordinator, EcoWaste Coalition.  “We congratulate the delegates, as well as the scientific experts and public interest advocates who made this happen.”

“The phase-out of PFHxS offers countries with an excellent opportunity to adopt fluorine-free alternatives that will not pose long-term harm to public health and the environment,” said Chinkie Peliño-Golle, IPEN Regional Coordinator for Southeast and East Asia. “National implementation plans will be updated accordingly to ensure programs and resources are put in place to support the global ban.”

For her part, Dr. Sara Brosche, IPEN Science Advisor, said: “COP10’s decision to ban PFHxS will help protect millions of people around the world, including firefighters who have some of the highest exposures because of PFHxS presence in firefighting foam.  Fluorinated chemicals contaminate humans and the environment, and there is an urgent need to globally ban all PFAS.”

After a rigorous evaluation, the POPs Review Committee (POPRC) of the Stockholm Convention has concluded that PFHxS is, as a result of long-range environmental transport, likely to lead to significant adverse effects on human health and the environment such that global action is warranted.

Due to its toxicity, persistence, bioaccumulation in the food chain, and ability to travel long distances, the Committee recommended the listing of PFHxS under the Convention for global elimination.  This includes a group of at least 79 commercially available compounds that can form PFHxS, further strengthening the case for addressing PFAS through a group approach under the Convention.

According to IPEN, “PFHxS has been a regrettable substitute for PFOS and used in consumer products; firefighting foams; metal plating; textiles; leather and upholstery; polishing agents and cleaning/washing agents; coatings; impregnation/proofing; and the manufacturing of electronics and semiconductors,” stressing “technically feasible, cost-effective alternatives are available for these uses, including fluorinated and nonfluorinated substances, as well as non-chemical alternatives.”

To avoid regrettable substitutes, “PFAS should be addressed as a class of substances because they share similar toxicological properties and harmful effects and should not be substituted as alternatives,” IPEN pointed out.

In addition, while little information is available for many PFAS substances, the precautionary foundation of the Stockholm Convention to protect human health and the environment calls for broad action on groups of PFAS, IPEN said.

A range of adverse effects have been associated with PFHxS, including impact on liver function, lipid and lipoprotein metabolism, endocrine disrupting effects related to changes in serum thyroid hormones, and immune system impairment. Endocrine disrupting effects can occur at very low concentrations, meaning that all exposure levels are of concern.