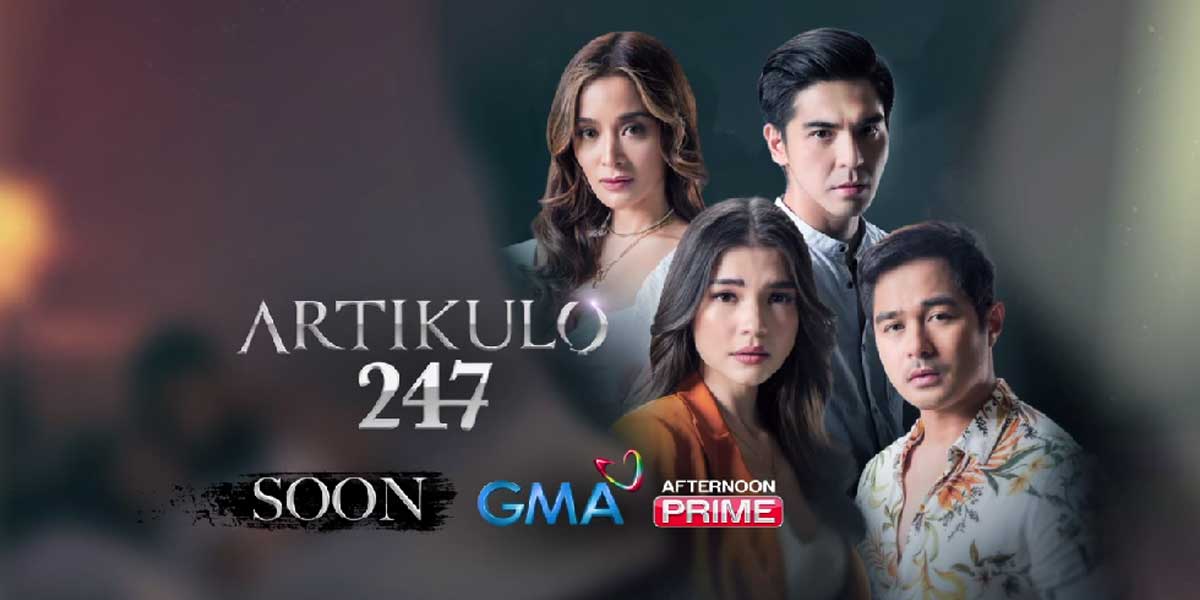 How do you move forward and live your life when the ghosts of the past haunt you?

Beginning March 7, GMA Network sets the gold standard for a riveting legal drama with the launch of the newest Afternoon Prime series ‘Artikulo 247.’

A repealed law under the Revised Penal Code, Article 247 states that “any legally married person who having surprised his spouse in the act of committing sexual intercourse with another person, shall kill any of them or both of them in the act or immediately thereafter, or shall inflict upon them any serious physical injury, shall suffer the penalty of destierro (banishment).”

The series showcases the emotional journey of a woman who bravely moves on from her past entanglement with her boss and his wife. But soon enough, her past slowly creeps in and catches up with her peaceful life.

It is topbilled by Kapuso prime leading lady Rhian Ramos as Jane Ortega, the aspiring career woman who will get involved with a married man; accomplished actor Benjamin Alves as Noah Borromeo, a principled man who is also recovering from a lost love like Jane. As their paths cross, they will build a new life together and help each other on the road to healing; highly-talented actress Kris Bernal as Klaire Almazan/Carmen Villarama, the cunning and manipulative wife who catches her cheating husband and ends up killing him; and well-rounded actor Mark Herras gets to showcase his range as he steps into a more mature role as Ellijah Borromeo, the perfect son and brother of Noah who will fall madly in love with Carmen.

Rhian reveals feeling challenged with her role in the series, “It was a very difficult and challenging role pero hindi ako nagdalawang-isip na tanggapin ang project na ito dahil dito ako may matututunan. Script wise, it was an enjoyable script to get into and to perform.”

Benjamin, in turn, teases Kapuso viewers on what to expect with his role, “Sa character ko, makikita nila yung different side siguro, different attack, iba yung makikita nila. Medyo gray yung character na ito instead of being white most of the time and it’s my first time working with Rhian kaya hopefully magustuhan nila yung journey nina Jane at Noah. The title alone, Artikulo 247, is enough to get you engaged and to love our show.”

Bringing more color and controversy to the series are Mike Tan as Julian, Klaire’s longtime lover who’s also a master manipulator and the brain behind her schemes; Glydel Mercado as Rose Ortega, the supportive mother of Jane;  Maureen Larrazabal as Pinky, Rose’s friend and business partner; Denise Barbacena as ChiChi, Carmen’s right-hand woman; Brent Valdez as Jigs, the friendly bartender in the resort; Victor Silayan as Alfred, Klaire’s husband who will have an affair with Jane; Rain Matienzo as Tanya, Jane’s bestfriend;  Topper Fabregas as Atty. Marcel, Jane’s lawyer and family friend.

Witness the engrossing plot twists and revelations in ‘Artikulo 247’ – under the helm of director Jorron Lee Monroy and associate director Ralfh Manuel Malabungan – beginning March 7 after Little Princess on GMA.