When it comes to bath time, Filipinos take it seriously. Apparently, bathing is a daily ritual sacred to many Filipinos–and it shows in their shopping habits. A research conducted by Packworks Sari IQ showed that Filipinos spend more on hygiene and self-care essentials in the event of disasters or emergencies.

Data analytics platform Packworks discovered that Filipinos cared most about their crowning glory as they purchased more shampoo and conditioner in sari-sari stores during the aftermath of Typhoon Odette in December 2021 (Leyte), Taal volcanic eruption in March 2022 (Batangas/Cavite), and Abra earthquake (Abra) in June 2022.

According to the data, 18 percent of sari-sari stores’ sales went to hair care products. Laundry supplies saw the second highest portion with 16 percent of sales. Meanwhile the “others” category, which included oral care, body care, beverages, and canned goods came in third with 15 percent.

Breakfast items like tea, coffee, and creamer placed fourth with 14 percent, followed by cooking necessities at 13 percent, oats and cereals at 13 percent, and pasta and noodles at 11 percent. 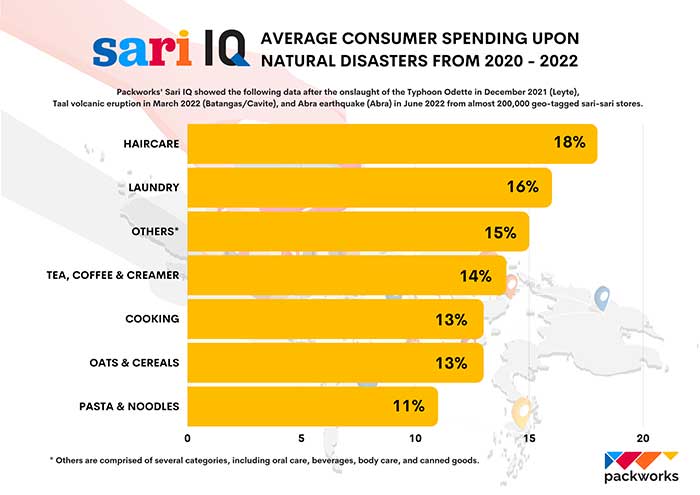 The hair care category also experienced uplifts of more than 50 percent during the period of the Taal Volcano unrest around the last week of March 2022.

However, Filipinos shifted their spending priorities when Typhoon Odette hit Leyte. It was revealed that spending on noodles and cooking essentials increased to almost 60 percent in the area after the disaster. In fact, hair care products trailed behind at 11 percent in average consumer spending, following pasta and noodles at 15 percent.

“The Philippines is a regular target of natural disasters because of its location at the Pacific Ring of Fire. Residents at the epicenter opt to buy their immediate necessities from a nearby ‘sari-sari’ store rather than go to big supermarkets,” said Andres Montiel, Packworks’ Head of Data.

“The analysis on the sari-sari stores becomes more valuable to track what items are deemed to be essential upon the occurrence of such natural disasters. This can be helpful in demand planning and product seasonality on the brand principal’s end,” he added.

The data sets were generated using Sari IQ, a business intelligence tool created by Packworks that gives retailers data analytics on consumer behavior and spending habits of people in a locality who purchase their needs in sari-sari stores. Data is generated from Packworks’ wide network of almost 200,000 sari-sari stores nationwide which contains insightful information on consumer spending and can be customized to create an analysis for sari-sari store categories that incur an uplift when compared to before a natural disaster occurs.