A delegation from the Ateneo de Manila and the University of the Philippines visited the SEAP headquarters in Malaga, Spain on April 20, 2022.

During their visit to the historic building located in the Plaza de la Constitución where SEAP has its seat, the Filipino professors paid special interest to its valuable bibliographic collection which, although mainly represented by 18th and 19th century works, also contains an important selection of earlier works including a section of manuscripts.

The librarian of the institution prepared a selection of books on the Philippines, mainly from the 19th century; as well as the maps of the Philippines from the end of the 18th century that are kept in the library, the delegation admired these collections and exclaimed their surprise to find pieces of their history in Malaga. 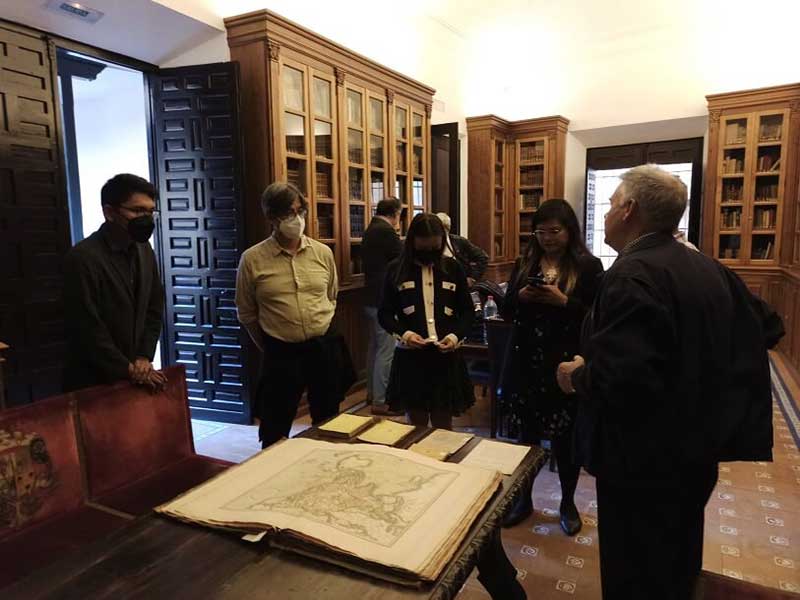 The most emotional moment of the event was when Francis Beltran addressed a few words to the members of the Spanish-Philippine Cultural Association of Malaga in the assembly hall.

In his speech, which he delivered in Spanish, he expressed his gratitude for the creation of this association in Malaga and welcomed its significance as a link of union, a reunion between two peoples “which has been a long time in coming”.

Mr Beltrán commented that his Filipino compatriots long for the time to come when the current Spanish culture will be accessible to the Philippines and the Filipino culture to Spain.

Afterwards, in front of the magnificent painting depicting the constitution of the Spanish Society of Friends of the Philippines before King Carlos III, at the request of the Gálvez family, the signing of the constitutive act of the Spanish-Philippine Cultural Association of Malaga took place by the founding members, namely, José Antonio Sierra Lumbreras, José Manuel de Torres Perea, Antonio Quesada Sánchez, David Cuevas Góngora, Francisco Ruiz Noguera, Jorge Villalobos Portalés and Jorge Chauca García, representing civil society and the Faculties of Law, Philosophy and Arts and Educational Sciences of the University of Malaga.

The members of the Philippine delegation were exceptional witnesses of this important moment.

The aims of the association are:

-To promote cultural, educational, artistic, touristic, sporting and commercial relations between the city and province of Malaga, as well as Andalusia, and the Philippines;

-To contribute to the development of Malaga’s relations with the Filipino communities in Spain;

-To disseminate the legacy of Professor Ruben Balane for being the greatest promoter of the recovery of academic ties between the Philippine and Spanish Universities; and

-To collaborate with Philippine and Malaga institutions, as well as with the University of Malaga.

The Philippine professors also participated in a ceremony in homage to Ruy Lopez de Villalobos, the explorer and sailor from Malaga who named the Philippines after the then Prince of Asturias.

The event took place at his birthplace (house located at the corner of Calle Compañía and Calle Santos in Malaga) on Thursday, April 21 at 6 p.m., in front of the commemorative plaque located there.