More females were born in Guimaras in the first four months of 2022, according to the Decentralized Vital Statistics System (DVSS) of Philippine Statistics Authority (PSA).

Most of the livebirths were females with a sex ratio of 84 males for every 100 female live births, and a gender gap of 8.88 percent. 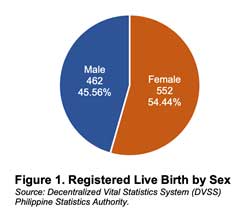 Losare also expounded that Buenavista municipality displayed a decreasing livebirth record for the first three (3) months of 2022. Contrary to the birth record in Nueva Valencia which demonstrated an increasing pattern, doubling the number of births each month on average from 23 in January to 42 in February and 86 registered live births in March. (See Figure 3).

“The municipality of Jordan showed erratic trends, 217 in January to a low of 168 in February and picked up in March with 266 live births”, Losare said.

Losare also highlighted that, out of six (6) total births for the municipality of Sibunag, four (4) of them were from March, two (2) were from February, and no record of births for January. San Lorenzo municipality recorded one (1) both for January and February. (See Figure 3) 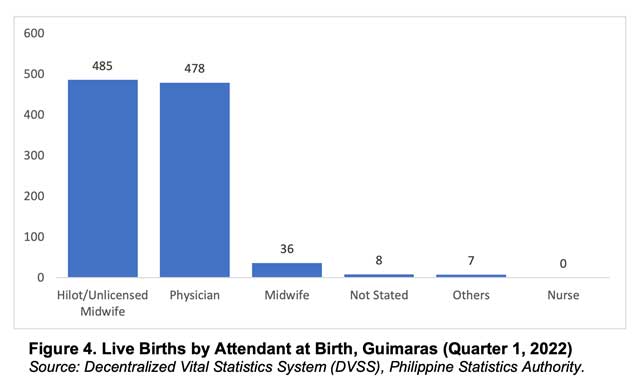 Registered live births featured in this article include late registration of senior citizens whose birth was attended before by traditional Hilot.

“Midwives attended 36 live births, more than double the combined numbers assisted by Others and Not Stated with 8 and 7 live births, respectively. No record shows where Nurse served as the attendant at birth in the Province of Guimaras for Qq1 2022”, Losare said.