(Translation: Good morning to all. Negrenses are so boastful. People from Bacolod are one of a kind in bragging, they surpassed Batangas, Iloilo and Pampanga.)

(Imagine that 70% of the Philippine population was fit in the Paglaum Sports Center with an overflow capacity of 20,000. I had so many laughs. They were damn noisy.)

Bombo Radyo Bacolod has admitted to posting the report but clarified that it intended to report 70,000 people. However, 70,000 in Hiligaynon is sisyenta mil, a loanword from the Spanish language.

(Over 70 thousand people are attending the Robredo-Pangilinan Grand People’s Rally at Paglaum Sports Complex, Bacolod City.) 70,000 in Hiligaynon is Sisyenta Mil, a loneword from Spanish.

The radio station belied the claim saying, “The screenshot showed the automatic translation of Facebook, which is wrong. The 70mil was made 70 million, instead of 70,000 or seventy thousand. Bombo Radyo Bacolod had no involvement [in the translation].” 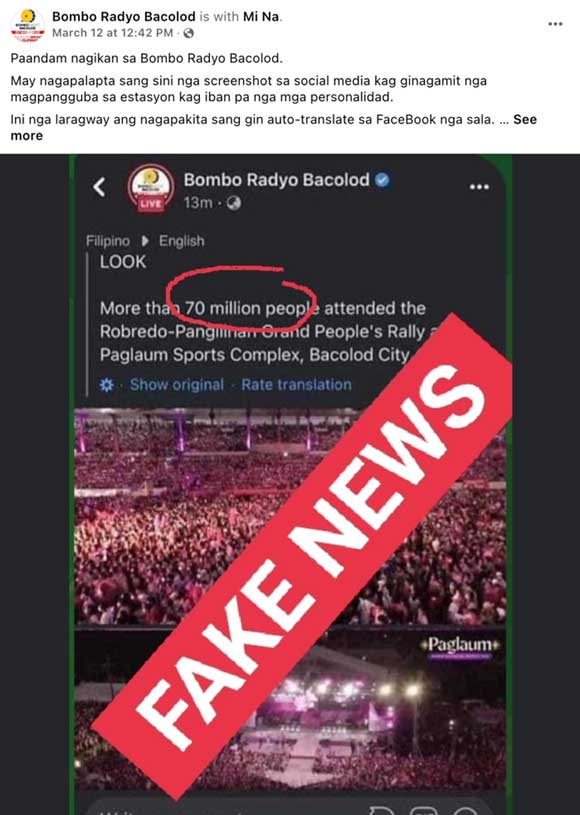 Negros Occidental provincial administrator Rayfrando Diaz reported that the crowd inside the Paglaum Stadium and surrounding area attending the event was estimated at 70,000 as of 6:30 p.m.

Daily Guardian is part of #FactsFirstPH, which brings together various sectors that are committed to promoting truth in the public space, and exacting accountability on those who harm it with lies.

Spotted a video or post you suspect to be false? Report it to the #FactsFirstPH tipline by messaging Daily Guardian on Facebook, so participating newsrooms and groups can investigate the claim.