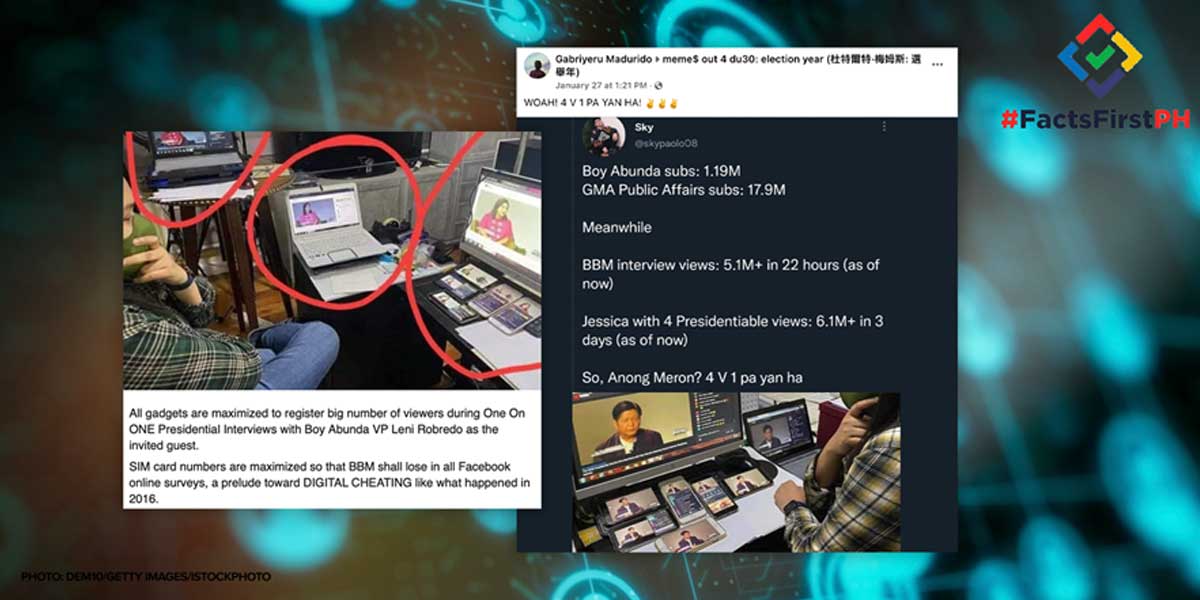 A post on the Facebook group “meme$ out 4 du30: election year” contained two images suggesting that the views Marcos gained from his interview with Abunda were thanks to troll farms. It has been shared over 12,000 times and has earned 33,000 reactions.

The top image was a screenshot of a tweet comparing the YouTube subscribers of Boy Abunda and GMA Public Affairs. For context, Marcos skipped the network’s one-on-one interview with award-winning broadcaster Jessica Soho. The presidential aspirant, three days later, was interviewed by Abunda on his YouTube channel.

A TikTok video that has been deleted as of this posting showed another photo of Sullano. This time she was watching in multiple devices Abunda’s interview with Robredo.

The footage claimed Sullano was a troll of Robredo and was watching on multiple devices to boost the views of the video. Similar claims were also shared on Facebook here and here.

All these posts are misleading.

In a YouTube video posted on January 30, 2022, Sullano clarified that supporters of presidential contenders used her photos to mislead netizens.

Sullano explained she was only observing how the live broadcast on YouTube aired at different times. She did not disclose whether she worked for Abunda, but she thanked the celebrity talk-show host when she greeted him in a Facebook post on October 29, 2021.

For the number of devices used by Sullano, as seen in the photos, she said it was from her boss who also wanted to check the “consistency” of the videos.

Sullano said they were just concerned about the “traffic” that the video was receiving, which she said might have affected how the live broadcast played on different devices connected to the same network.

Robredo and Marcos were not the only videos Sullano and her team tried to check. They also checked the live broadcast videos of Senators Ping Lacson and Manny Pacquiao, and Manila Mayor Isko Moreno. All five aspirants were featured in the week-long series aired live on YouTube from January 24 to 28, 2022.

While Sullano is not a troll, they are real. Marcos is known for being the candidate most backed by a vast online disinformation network. But the presidential candidate denied in a recent interview that he has trolls and said false news is “dangerous.”

Robredo, meanwhile, is the biggest victim of dis- and misinformation amplified by trolls to attack negatively the lone female contender.

Daily Guardian is part of #FactsFirstPH which brings together various sectors that are committed to promoting truth in the public space, and exacting accountability on those who harm it with lies. For those interested to join the initiative, email editorial@dailyguardian.com.ph and info@factsfirst.ph, or send a message to facebook.com/DailyGuardianPH.