Taiwanese-Australian singer, producer, songwriter, and multimedia artist Jaguar Jonze (AKA Deena Lynch) is thrilled to announce her debut album ‘BUNNY MODE’ due out June 3 via Nettwerk. Alongside the announcement is a playful music video for her new single “TRIGGER HAPPY”.

Featuring previously released singles “WHO DIED AND MADE YOU KING?”, “CUT”, and “LITTLE FIRES”, ‘BUNNY MODE’ is a personal triumph of resilience and an incredible creative work that allows the world-building artistry of Jaguar Jonze to shine through. “TRIGGER HAPPY” sees Jaguar Jonze explore “love bombing” (i.e being lavished with attention or affection by a person so they can more easily influence or manipulate) and being in a place where she finally sees certain behaviours for what they are–a theme evident across ‘BUNNY MODE’.

The video, which Jaguar Jonze directed, edited, and produced, includes visual nods to earlier videos and was cleverly shot guerilla-style during breaks in her album cover photoshoot. “The video is hectic and fun. During any break, I would yell out, “quick, shoot me doing weird poses!” or “look, there’s a dog on set – FILM THIS!”. The day was high energy which we captured in the video. And not a bad performance considering my shoes had cut off the circulation to my

Jaguar Jonze radiates confidence, finding strength in vulnerability and tackling the dark stuff with sharp-edged humour on ‘BUNNY MODE’. She creates a unique and cinematic patchwork of stadium pop, industrial noise, and punchy punk energy as she moves past an old coping mechanism that she calls “going bunny mode” – becoming still and quiet instead of crying out in response to physical, psychological and emotional threats. “This album is a journey of saying goodbye to that ‘bunny mode’,” she shares. “Making this album has been this process of saying – thank you for saving me and allowing me to survive up until this point, but I don’t need you anymore.” 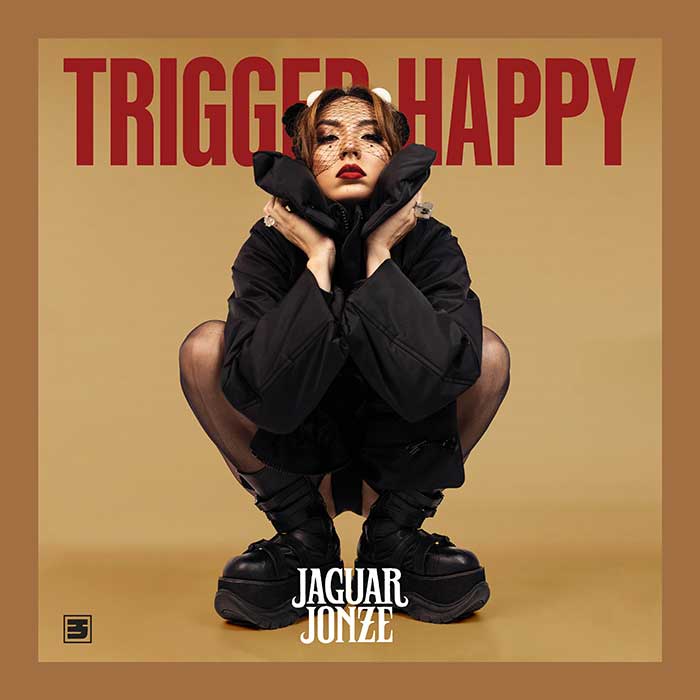 Her debut full-length is also a love letter to music itself; she explains, “Most things I did in my life, I did for survival. But, making music was the complete opposite: it was a gift and permission to myself to create, live passionately, and say what I was feeling. It was passion, intimacy, rawness, and connection; it completely changed my life. It made me feel human.”

At its core, ‘BUNNY MODE’ is a powerful feminist work that explores Jaguar Jonze’s journey as an assault survivor, an advocate for change, and a figure on the frontline of the #MeToo movement. The album finds Jaguar Jonze triumphant, unwilling to be complicit in a culture of silence and to speak up to an industry that was banking on her staying quiet. “I’ve given myself permission to feel the emotions that I’ve been holding back on for so long, to find my voice and use it in this world,” she describes. “Because I know my worth now. And I do have something to say.”

Described as “Nothing short of a manifold visionary” by Flaunt, Jaguar Jonze has had a non-stop two years, becoming a public vessel for change and accountability in the music industry while simultaneously focusing on her creative artistry. Her recent singles have received praise from Rolling Stone, MTV, and NME, and she was named feature artist on BBC Radio 1’s Future Artists with Jack Saunders. In addition to the already announced BUNNY MODE Australian

Tour this July and August, Jaguar Jonze is joining The Wombats on their Australian tour this June.

In honour of her advocacy to raise awareness of discrimination and abuse within the music industry and pushing practitioners to operate in a safe and respectful environment, Jaguar Jonze has been awarded the triple j Done Good Award, AIR Outstanding Achievement Award, and named one of the 21 Most Inspiring Women of 2021 by Vogue Australia. Jaguar Jonze continues her advocacy work, including the group that commissioned the Music Industry Review of sexual harm, sexual harassment, and systemic discrimination in the contemporary Australian music industry and recommendations for reform. As best described in her own words on Billboard: “The heat that is picking up and fanning those tiny fires into a blaze of reckoning.“