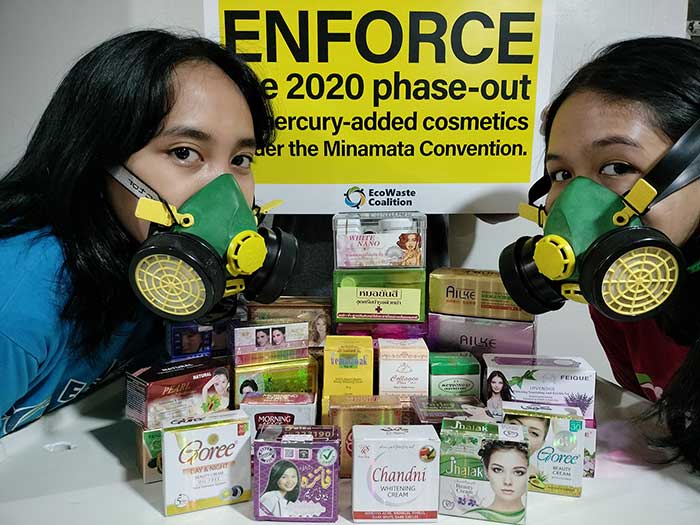 As the fifth anniversary of the entry into force of the Minamata Convention is observed on August 16, a toxics watchdog group exhorted governments to put an end to the unlawful trade of mercury-added skin lightening cosmetics, which infringe on the people’s rights to health and a healthy environment.

The EcoWaste Coalition, an advocate for a zero waste and toxics-free society, appealed to countries where mercury-laden cosmetics claiming to lighten skin tone, fight aging and cure other dermal problems are still produced to honor the 2020 phase-out deadline for such mercury-added products (MAPs).

Skin lightening soaps and creams are among the MAPs whose manufacture, import and export was phased out in 2020 under the Minamata Convention in order to protect human health and the environment from anthropogenic releases of mercury and its compounds.

“Our most recent investigation shows that the manufacture, import and export of mercury-added skincare cosmetics have not stopped despite the 2020 phase-out deadline.  We are deeply concerned for the health of consumers, who are mostly women, and their households as many of these products are contaminated with extremely high levels of mercury that will classify them as hazardous waste,” said Aileen Lucero, National Coordinator, EcoWaste Coalition.

“Governments, particularly those that have ratified the Minamata Convention, must see to it that the global phase-out of mercury-laced cosmetics and other MAPs is enforced to the letter,” she said. “These poisonous cosmetics can cause adverse health effects to women and even to babies in the womb, while perpetuating the racist notion that dark skin is ugly and white skin is pretty.”

For its latest investigation, the EcoWaste Coalition purchased 28 skin whitening products from offline and online retailers, which were then sent to the Wonjin Institute for Occupational and Environmental Health (WIOEH) in South Korea for analysis as part of the Cosmetics Without Harm project supported by the Beautiful Foundation, a non-profit Korean organization.

According to Dr. Won Kim, Cosmetics Without Harm Project Leader: “The results of the study have confirmed that some cosmetics made by oversea manufacturers contain mercury. Therefore, it is very important to strengthen the regulations banning the use of mercury in cosmetics across Asian countries.”

The products, representing 18 brands, were manufactured in China, Indonesia, Malaysia, Pakistan, and Thailand, which, except for Malaysia, have ratified the Minamata Convention.

According to the analysis performed by the WIOEH, 27 of the analyzed products had mercury in excess of 1 ppm, the maximum limit under the Minamata Convention, as well as the ASEAN Cosmetic Directive which has listed mercury as early as 2007 among the hazardous substances that must not form part of the composition of a cosmetic product.

None of the products have a Certificate of Product Notification issued by the Food and Drugs Administration (FDA) and are therefore not authorized to be distributed or sold in the Philippines.

Products found to contain excessive mercury above 10,000 ppm include:

Mercury is among the “10 chemicals of public health concern,” according to the World Health Organization (WHO).  A potent neurotoxin, it can harm multiple organs of the body, particularly the developing brain of the fetus even at extremely low concentrations.

Direct application to the skin allows dermal absorption and inhalation of mercury vapor creating a two-fold exposure scenario. Adverse health effects, as identified by WHO, include skin rashes, discoloration and scarring and reduced dermal resistance to bacterial and mycotic skin disorders.  Repeated applications of such products onto the skin can cause damage to the kidneys, the brain and the central nervous system.

To protect people’s health from mercury-added cosmetics, the EcoWaste Coalition renewed its call on the authorities to intensify compliance monitoring, identify and charge errant manufacturers, distributors and retailers, including online sellers, and promote continuing public education to enhance consumer awareness on and vigilance against mercury toxicity, and foster acceptance of one’s natural skin color.

Davao, Dipolog, and Quezon are 2022 PHL flagbearers in WWF’s We Love Cities