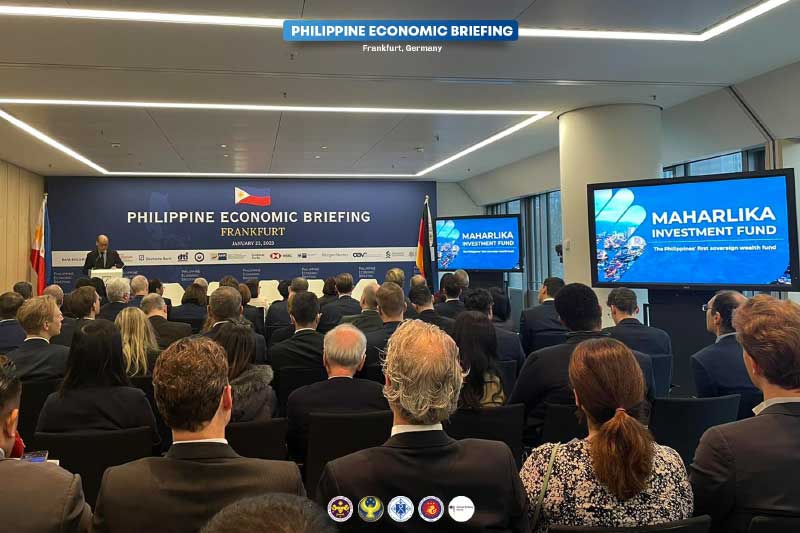 The economic team, led by Finance Secretary Benjamin Diokno, held its first Philippine Economic Briefing (PEB) for the year at the Deutsche Bank Twin Towers in Frankfurt, Germany on January 23, 2023.

“Our dramatic recovery was the result of deliberate, well-crafted structural reforms from one administration to the next and the resolve of the Philippine government to recalibrate policies as needed during times of crises,” he said.

According to Secretary Diokno, many of the challenges being faced today are manageable with the right policy tools, strong commitment, and willingness to act.

The Marcos administration has put together an 8-Point Socioeconomic Agenda to tackle immediate, on-the-ground concerns while setting into motion deep economic and social transformation where growth opportunities for all Filipinos abound.

This agenda serves as the basis for the Philippine Development Plan (PDP) 2023 – 2028, which is a plan for deep economic and social transformation to reinvigorate job creation and accelerate poverty reduction through inclusive economic growth.

In his welcome remarks, Achim Linsenmaiers, Managing Director, Vice Chairman of Global Public Sector for Origination & Advisory (DCM) of Deutsche Bank said, “This event is being organized on the back of the Philippines’ highly successful bond offering, just two weeks ago. It was the first transaction in 2023. The 3 billion dollar large transaction was supported by an outstanding 27 billion dollar order book–––a testament to investors’ confidence on the progress made by the Philippine government.”

In line with this, Secretary Diokno also informed investors that the Philippines has now opened up its renewable energy sector to full foreign ownership to aid in the country’s pursuit of a just and clean energy transition.

Bhavik Pandya, Managing Director and Head of South and Southeast Asia Debt Capital Markets of the Bank of America, closed the briefing, saying, “Under the leadership of President Marcos’ administration, we are confident that the Philippines will continue to prosper, and that the economy would be in a much better shape in the years to come.”

The PEB in Frankfurt is organized in partnership with Bank of America Securities, Deutsche Bank, Goldman Sachs, HSBC, Morgan Stanley, Standard Chartered Bank, UBS, Embassy of the Philippines in Berlin, Philippine Consulate General in Frankfurt, German-Philippine Chamber of Commerce and Industry, and Department of Trade and Industry.