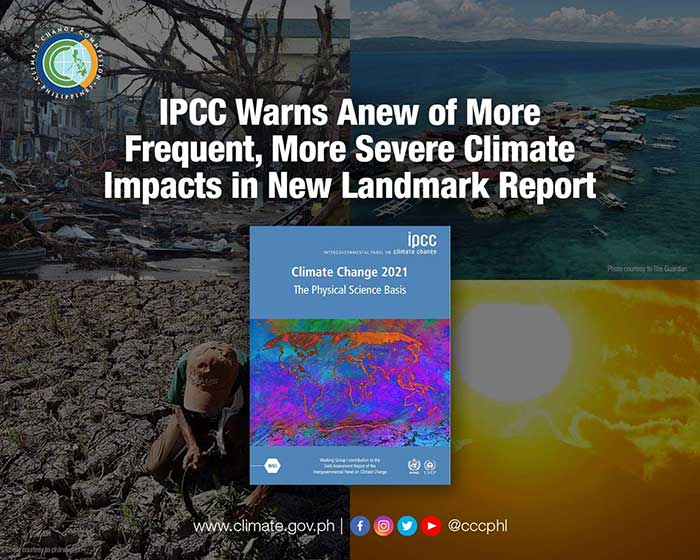 The Climate Change Commission (CCC) cited a new report by the UN Intergovernmental Panel on Climate Change (IPCC) as a wakeup call for countries to urgently scale up mitigation efforts to keep average global warming at 1.5 degrees Celsius and to adapt to more frequent and more severe climate impacts, some of which are irreversible.

The “Climate Change 2021: The Physical Science Basis” report is the contribution of the IPCC’s Working Group I to the Sixth Assessment Report, which stressed that “it is unequivocal that human influence has warmed the atmosphere, ocean and land” and that “widespread and rapid changes in the atmosphere, ocean, cryosphere and biosphere have occurred.”

This report is considered the most up-to-date physical understanding of the climate system and climate change, bringing together the latest advances in climate science, and combining multiple lines of evidence from past climate (paleoclimate) observations, process understanding, and global and regional climate simulations. More than a hundred scientists worldwide contributed to the report, among them Dr. Faye Abigail Cruz of the Manila Observatory.

The report presents updated estimates of the likelihood of exceeding the 1.5°C global warming level in the next decades, concluding that limiting warming to close to 1.5°C, or even 2°C, will be impossible unless greenhouse gas (GHG) emissions are reduced immediately, rapidly, and on a massive scale.

Human-caused GHG emissions have been responsible for roughly 1.1°C of warming since 1850-1900 or pre-industrial levels, and global temperatures are predicted to reach or exceed 1.5°C during the next 20 years on average.

The report said that climate change is expected to worsen in all locations over the next few decades. There will be more heat waves, longer warm seasons, and shorter cold seasons for every 1.5°C increase in global warming. Heat extremes will more frequently approach critical tolerance levels for agriculture and health at 2°C of global warming.

However, it is not only a matter of temperature. Climate change is causing a variety of changes in many places, all of which will worsen as temperatures continue to rise. These include the following specific impacts, according to the report:

Just last month, several countries in Europe, North America, Africa, Oceania and Asia, including the Philippines, were devastated by extreme weather such as floods, storms, heatwaves, wildfires and drought, bringing widespread destruction. Some of the affected countries were noted to have never experienced such extreme disturbances in recent history.

While some parts of the world are submerged due to heavy flooding and excessive rains, others have been burning under intense heatwaves and wildfires. Some of the world’s wealthy cities are unprepared for extreme weather events. It demonstrates that the impact is no longer limited to developing countries; it is now affecting the developed economies as well.

The CCC said that this should serve as a wakeup call not only for the Philippines, but also for all countries and world leaders to take decisive action on increasing warming temperatures to protect the planet and future generations from such previously unimaginable scenarios.

According to the IPCC report, the substantial and consistent reductions in carbon dioxide and other greenhouse gas emissions such as methane have the capacity to influence the future direction of climate. While improvements in air quality would be immediate, global temperature stabilization might take 20-30 years.

The CCC said that the world must go considerably further to keep the 1.5 challenge alive. That will require a concerted set of policies including phasing out coal power and commit to not opening or financing any new coal-fired power stations; providing developing countries with better support to deliver clean energy; reforming the global trade in agricultural commodities to help farmers to make a better living while forests are protected; and last but not least, for loss and damage policies to be set in place to support adaptation initiatives, in line with mobilizing long-term finance.

The Sixth Assessment Report or AR6 consists of contributions from each of the three IPCC Working Groups. The succeeding reports are scheduled for release in 2022.

Access their contribution to the Assessment Report through this link: https://www.ipcc.ch/assessment-report/ar6/ and watch the replay of the launch through the YouTube channel of the IPCC at https://www.youtube.com/watch?v=z149vLKn9d8.

Davao, Dipolog, and Quezon are 2022 PHL flagbearers in WWF’s We Love Cities