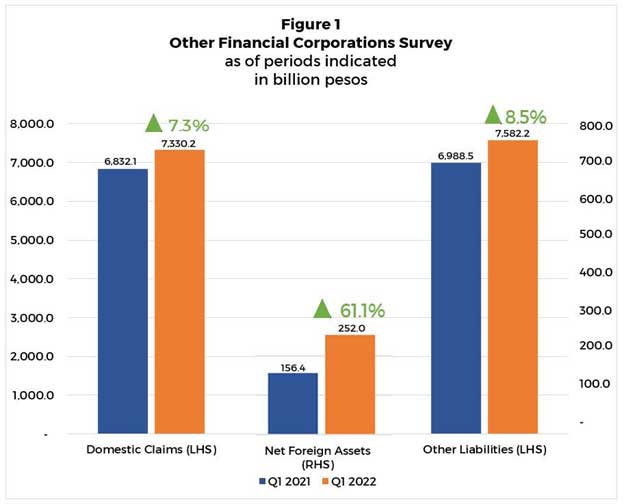 In Q1 2022, the OFCs’ claims on the private sector rose from a year ago, owing to the sector’s higher investments in equity securities issued by private nonfinancial corporations as well as more loans extended to households.

The growth in domestic claims can also be attributed to OFCs’ higher claims on the national government as evidenced by the sector’s increased holdings of government securities.

On the other hand, the OFCs’ claims on depository corporations declined in Q1 2022 compared to the same period last year, mainly due to the sector’s lower bank deposits and decreased holdings of debt securities issued by banks.

The expansion in the OFCs’ assets was funded primarily by their issuances of shares and other equity.

[1]   The OFCS is a comprehensive measure of the claims and liabilities of the OFCs. OFCs refer to institutional units providing financial services other than banks, non-banks with quasi-banking functions, nonstock savings and loan associations, and the central bank. These institutional units are comprised of non-money market funds of trust institutions, trust corporations, and investment companies, private and public insurance corporations, holding companies, government-owned or -controlled corporations engaged in financial intermediation, and other financial intermediaries and auxiliaries.