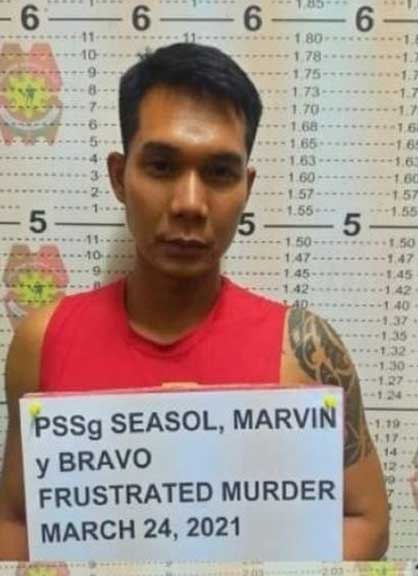 The National Police Commission (NAPOLCOM) has ordered him dismissed from service for an incident several years back.

It stemmed from a complaint filed by a certain Michael Silla who accused Seasol of beating him up on July 5, 2018.

But Celis said on Monday the recent decision to dismiss Seasol from the service might be “moot and academic.”

This, after the Police Regional Office 6 (PRO-6) confirmed that Seasol is no longer with the PNP.

Celis said they were not furnished a copy of the implementation order of Seasol’s dismissal from service.

As such, “the latest order dismissing him from the service will just be held in abeyance.”

If Seasol would contest his earlier dismissal and would be reinstated from service, the latest dismissal order will be served to him.

“There’s no timeline for that,” Celis said.

Seasol, then a member of the Arevalo Police Station, hogged the limelight after he was accused of assaulting and shooting his neighbor on March 24, 2021.

The Oton Police Station filed a case against him for shooting his neighbor Normando Estrebor.

When Estrebor and his father, Ernesto, peeped through their fence, they saw Seasol.

The cop, who was drunk at that time, then fired his gun, with the bullet hitting Estrebor’s back.

Seasol then holed up inside their house at Panique Subdivision ah Barabgay Buray, Oton, which is just around 20 meters from the scene of the incident.

He only yielded to police authorities after more than three hours of negotiation.

He surrendered his issued caliber .9mm Glock 17 pistol loaded with 15 ammunition and a 5.56 M16 Elisco rifle loaded with a magazine with 28 ammunition.